After having seized on the entirety of a Table decoration, the eyes occupy themselves with the details, and taking them piece by piece, in examining their execution. Each Guest praises or critiques its work, and more or less flatters the pride of the sumptuous Host. It seems to us, therefore, useful to everyone to introduce objects of Fashion which, by their universality, can justify our choice.

The Soupière drawn in the Third plate, though of a simple and easy to execute type, is in current use: its beautiful simplicity has been adopted.

This Soupière has scallops and two handles, which end in laurel branches which embrace the Soupière.

The Cover is a dome and has scallops.

It is served on an oval silver plate.

The two pieces of silverwork that we have already given, together with those which we will give, are from the Workshop of M. Boury-Milleran, Master and Merchant Silversmith, rue Saint-Eloi, near the Palace. At his shop is found everything that can be desired in Silversmithy. He makes Deliveries to the Provinces and Foreign countries.
---
A Man of very-great merit, who perfectly knew the character of the French, and whose vigorous pen has often drawn their diverse affections with great traits, has not failed to trace their particular taste for Fashion, and the sort of empire that, by it, they love to exercise on all the other Nations. As the picture must belong to us by right, we do not make difficulty over sending a copy to our Subscribers.
--- 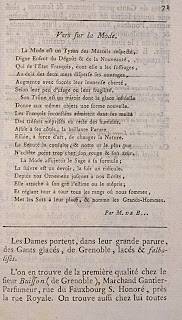 Fashion is a Tyrant of respected Mortals,
Worthy Child of Distaste and Novelty,
Who of the French State, in which she has votes,
Beyond the two seas disperses her works,
Augmented with success their immense cost,
According to their little practice or fragility.

Her Throne is a mirror in which the unfaithful glass
Gives to the same objects a new form.
The inconstant French admire in her hands
Despised treasures of the rest of humans.
Seated at her sides, the brilliant Parure
Tries, by art, to change Nature.
Beauty consults her, and our purest gold
Doesn't buy expensively her red and blue.

Fashion subjects the Sage to her formula;
To follow her is required, to flee her ridiculous.
From our Ornaments to our Writings,
She attaches to her will esteem or contempt;
And ruling alternately all the ranks where we are,
Puts the Fools in their place, and names the Great Men. 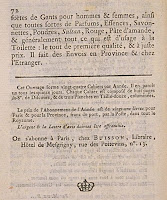 By M. de B ...
---
Ladies wear, in their grand parure, glazed Gloves, of Grenoble, laced and frilled.

They are found in the first quality in the shop of M. Buisson (of Grenoble), Merchant Glover-Perfumer, rue de Fauxbourg S. Honoré, near the rue Royale. One also finds at his shop all sorts of Gloves for men and women, as well as all sorts of Perfumes, Sultan, Rouge, Almond paste, and generally all that is used in the Toilette: the whole of the first quality, and at a fair price. He makes Deliveries to the Provinces and to Foreign countries.