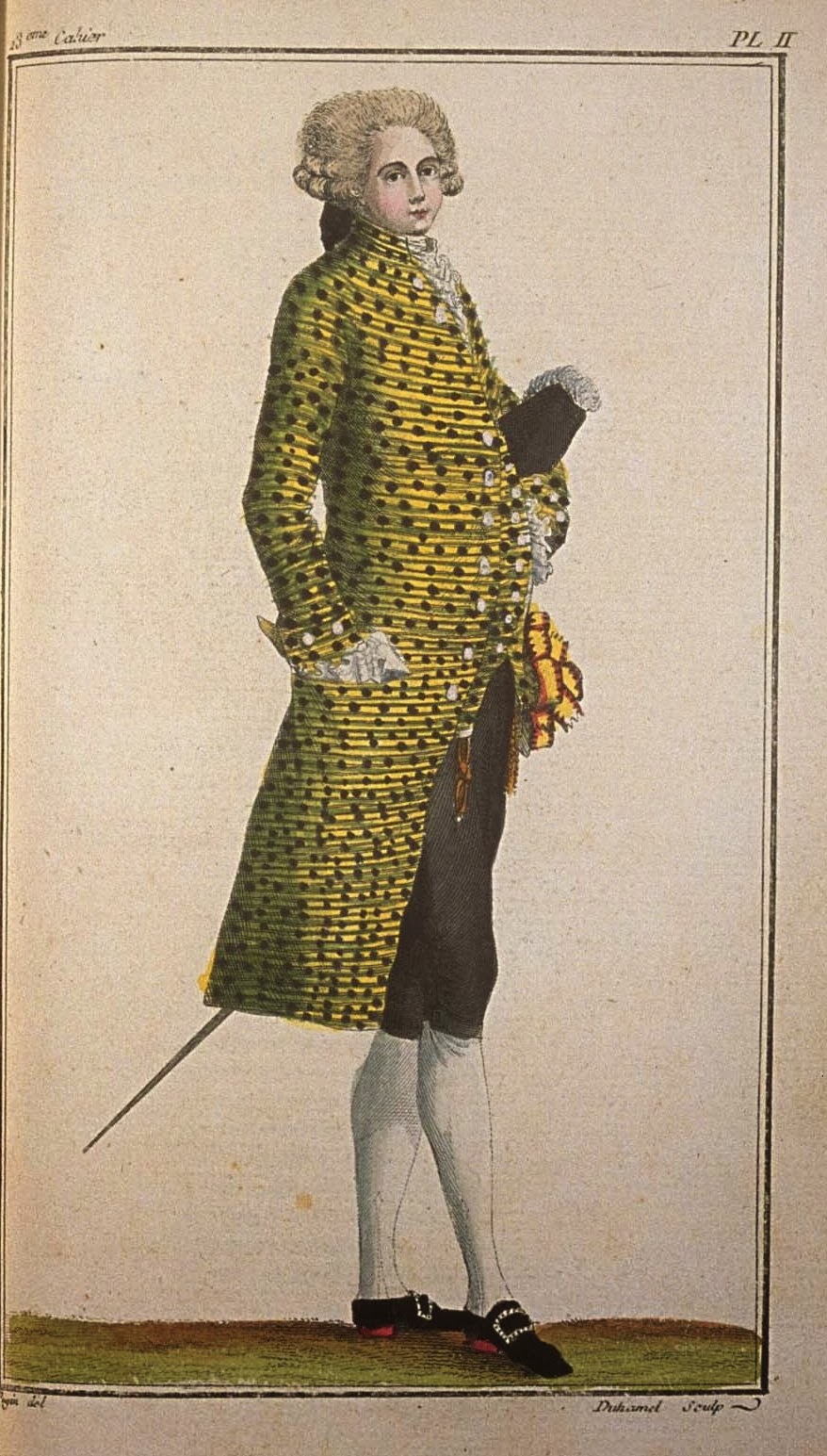 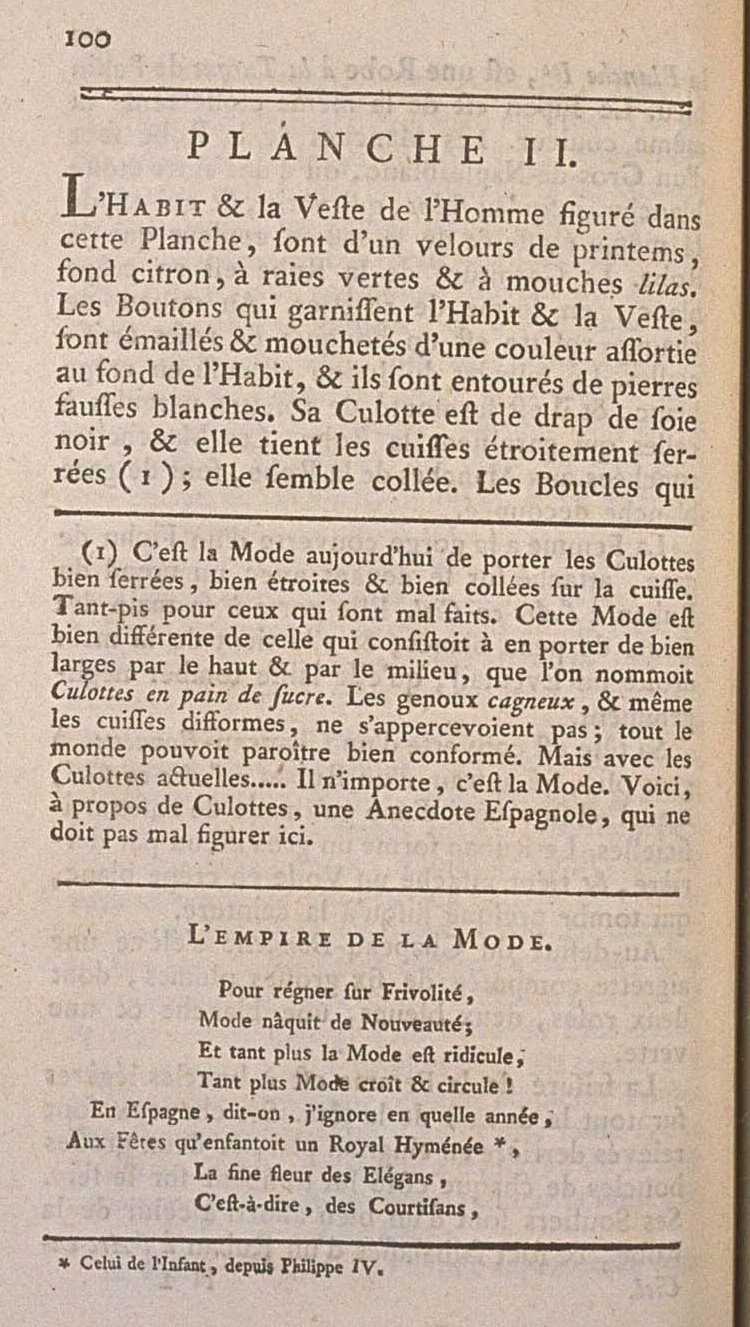 THE COAT and Vest of the Man shown in this plate, are of a spring velvet, with a lemon ground, green stripes, and lilac spots. The Buttons which trim the Coat and Vest, are enameled and spotted with a color matching the ground of the Coat, and they are edged with false white stones. His Breeches are of black silk cloth, and they hold his thighs very tightly (1); they seem pasted on. The Buckle which fastens his garters are a little ring of silver in long-squares. His silk Stockings are white. His Shoes have red heels, (that are not believed to be the Fashion for everyone), and his shoe Buckles are perfect ovals, such as were shown in the previous Book. The Man carries under his arm a Hat with a white plume, and at his wrists are lace Manchettes.

To give him more poise, we have put his left hand in his Vest, and his right hand in the pocket of his Coat. If only a Man has ease and liberty in his walk, one cannot deny that this attitude is agreeable.

(1) It is the Fashion today to wear breeches that are very tight, very narrow, and very stuck to the leg. Too-bad for those who are badly formed. This Fashion is very different from that which consisted of wearing them very wide at the top and in the middle, which were called sugarloaf Breeches. Knock knees, and even deformed thighs, were not seen; everyone could seem well-formed. But with the present Breeches ... it doesn't matter, it is Fashion. Regarding Breeches, here is a Spanish Anecdote, which must not poorly figure here.

THE EMPIRE OF FASHION.

In Spain, one said, I ignore in which year, 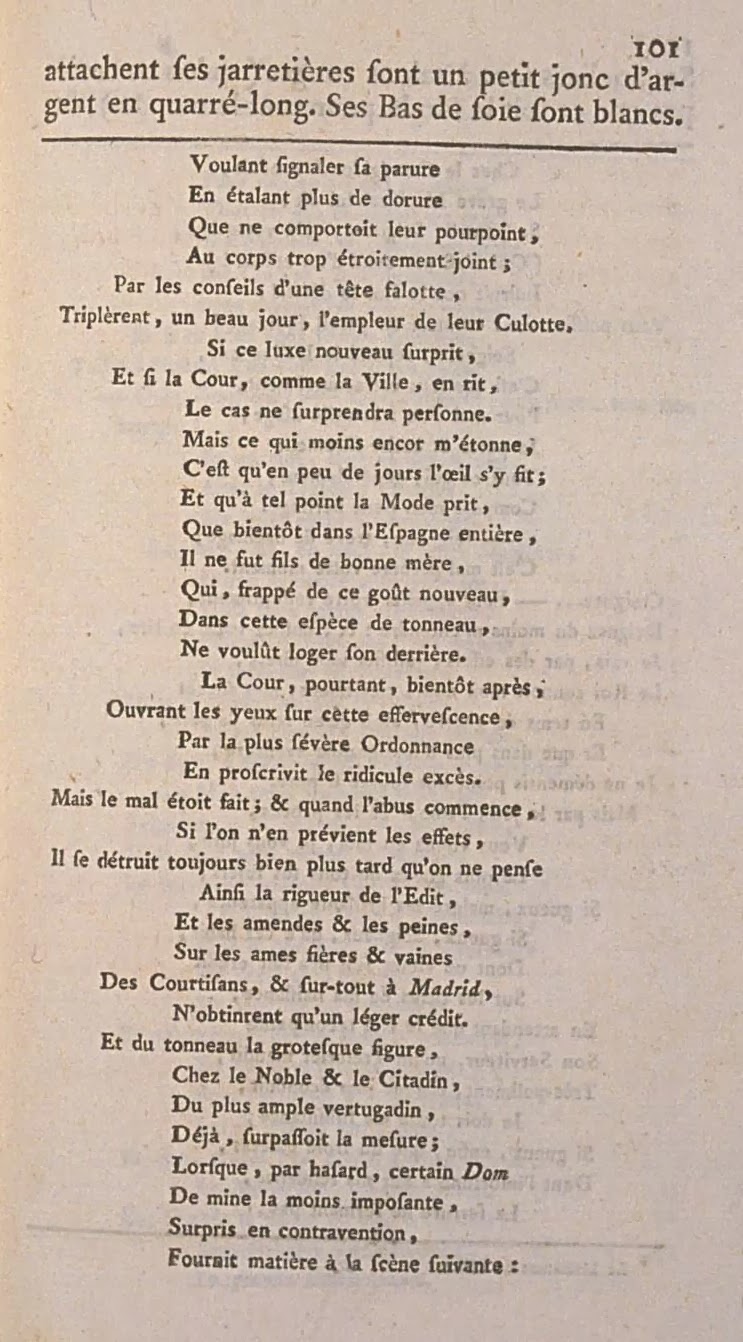 The Feasts that a Royal Wedding birthed*,
The fine flower of Elegance,
That is to say, the Courtiers
Wanting to report on his dress
In spreading more gilding
Than his doublet consisted of,
To the body too narrowly joined;
From the counsels of a frivolous head,
Tripled, one fine day, the fullness of their Breeches,

If this new luxury surprised,
And if the Court, like the City, laughed at it,
The case will surprise no-one.
But what still less astonishes me,
Is that in a few days the eye made itself;
And that insomuch Fashion took it,
That soon in the whole of Spain,
There was no son of a good mother,
Who, broken to this new taste,
In this type of barrel,
Did not want to lodge his bottom.

The Court, however, soon after,
Opening their eyes to this effervescence,
By the most severe Ordinance
Proscribed the ridiculous excess of it.

But the evil was done; and when abuse begins,
If one doesn't warn of its effects,
It is always destroyed later than one thinks
And the rigor of the Edict,
And the penalties and sentences,
On the proud and vain souls
Of the Courtiers, and especially in Madrid,
Only obtained a light credit.

And the grotesque figure of the barrel,
In the home of the Noble and Townsman,
The fullest farthingale,
Already, surpassed the measure; 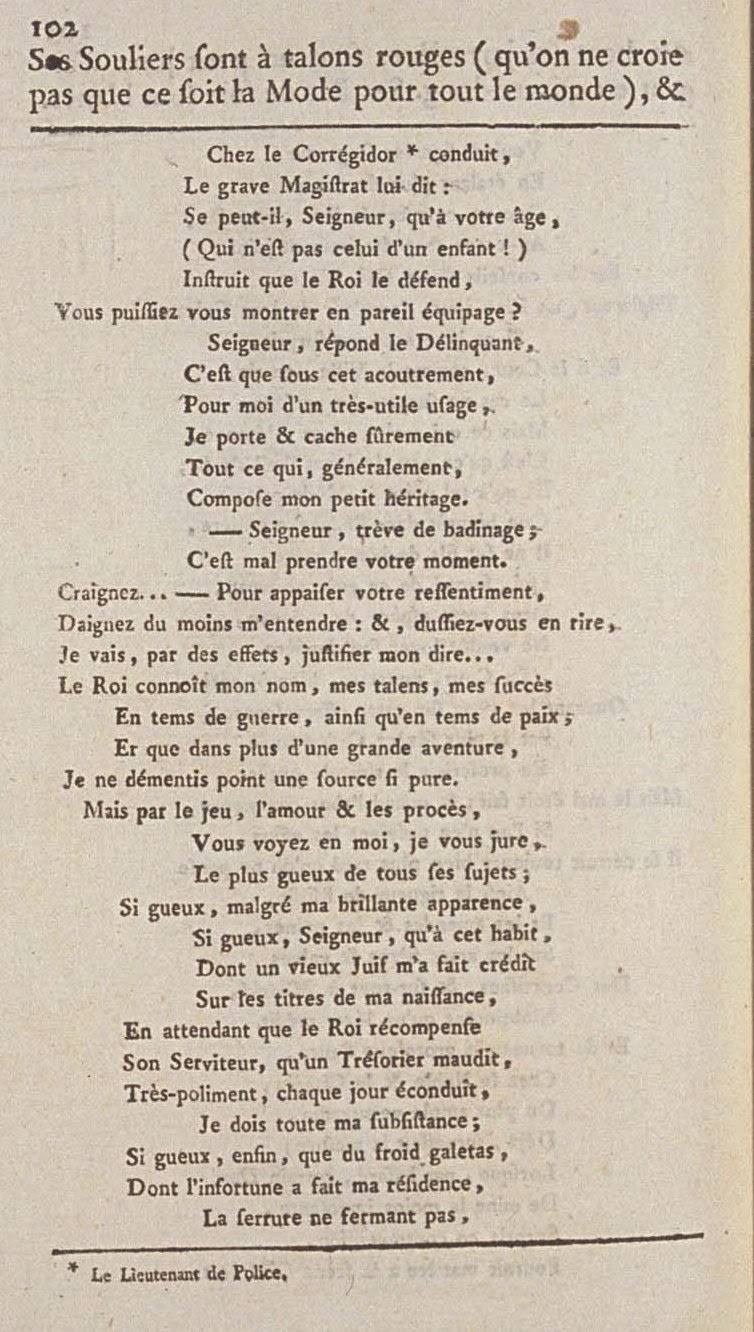 When, by chance, a certain Don
Of the least imposing mien,
Caught in contravention,
Furnished material for the following scene:

To the home of the Corrégidor** driving,
The grave Magistrate said to him:
Can it be, Seigneur, that at your age,
(Which is not that of a child!)
Instructed that the King forbids it,
You can get up in such an equipage?

Seigneur, responds the Delinquent,
It is that under this accoutrement,
For me a very-useful practice,
I wear and hide surely
All that, generally,
Composes my little legacy.
-- Seigneur, truce from badinage;
It is bad to take your moment.
Be afraid ... -- To appease your resentment,
Deign at least to listen to me: and, do not laugh,
I am going, through these effects, to justify my say ...
The King knows my name, my talents, my success
In time of war, as in time of peace;
And that in more of a great adventure,
I never contradict a source so pure.
But by the game, love, and trials,
You see in me, I swear to you,
The most wretched of all your subjects;
So wretched, Seigneur, that in this dress, 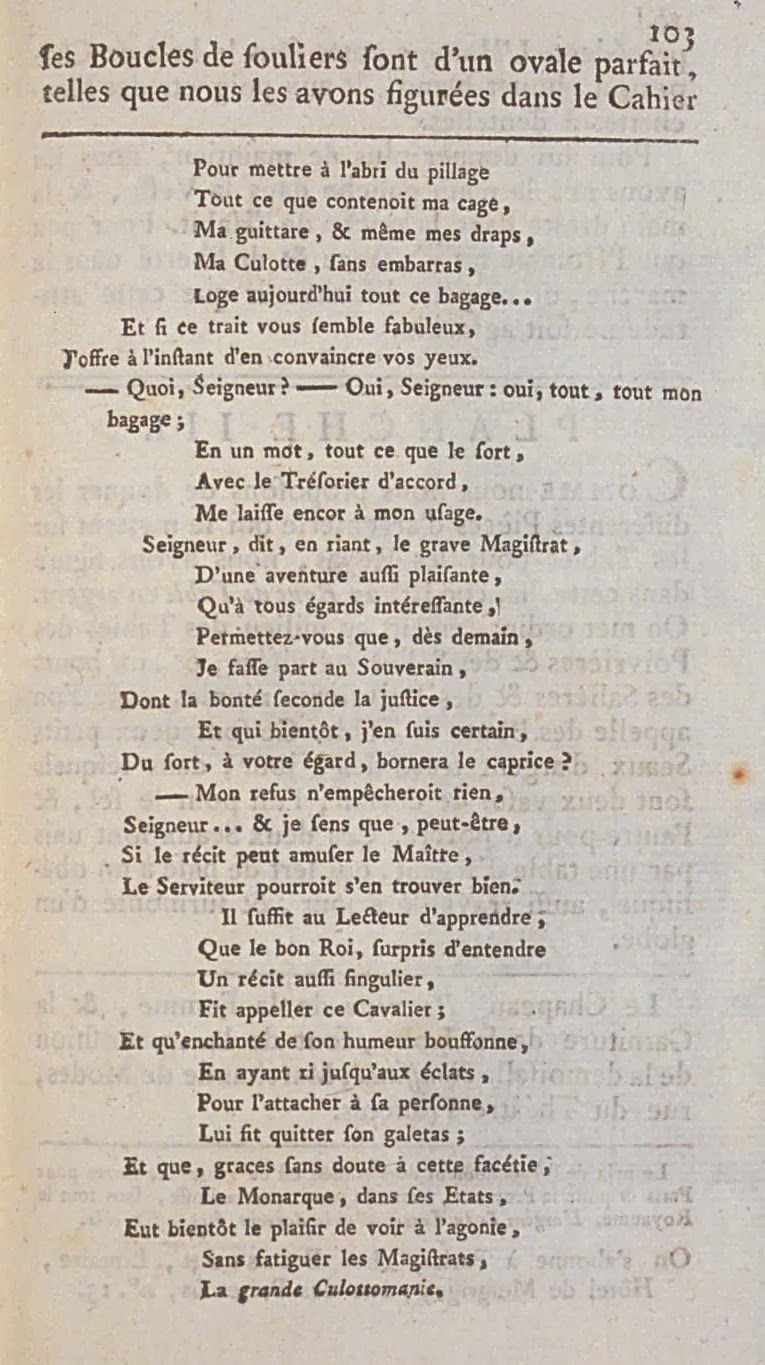 For which an old Jew gave me a loan
On the titles of my birth,
Until the King recompenses
His Servitor, that a cursed Treasurer,
Very politely, each day spurned,
I owe all my subsistence;
So wretched, at last, that the cold attic,
Of which misfortune has made my residence,
The lock not closing.
To take shelter from the pillage of
All that my cage contained,
My guitar, and even my cloth,
My Breeches, without embarrassment,
Lodge today all this baggage ...
And if this tale seems fabulous to you,
I offer instantly to convince your eyes.
-- What, Seigneur? -- Yes, Seigneur: yes, all, all my baggage;
In a word, all that comes out of it,
Agrees with the Treasurer,
Leaves me again to my habit.
Seigneur, said, in laughing, the grave Magistrate,
Of an adventure as pleasant,
As to all interested regards,
Permit that, from tomorrow,
I share with the Sovereign,
Whose bounty is second to justice,
And who soon, I'm certain,
Of fate, in your opinion, will confine caprice?
-- My refusal prevented nothing,
Seigneur ... and I feel that, perhaps,

If the story can amuse the Master,
The Servitor could find it well.
It suffices for the Reader to learn,
That the good King, surprised to hear
A story as singular,
Called this Knight;
And enchanted with his farcical humor,
In having laughed to the sparkles,
To attach to his person,
Made him quit his attic;
And that, thanks without a doubt to this jest,
The Monarch, in his Estates,
Had soon the pleasure to see the agony,
Without fatiguing the Magistrates,
The great Breeches-lover.

* That of the Infante, later Philip IV.
** The Lieutenant of Police.