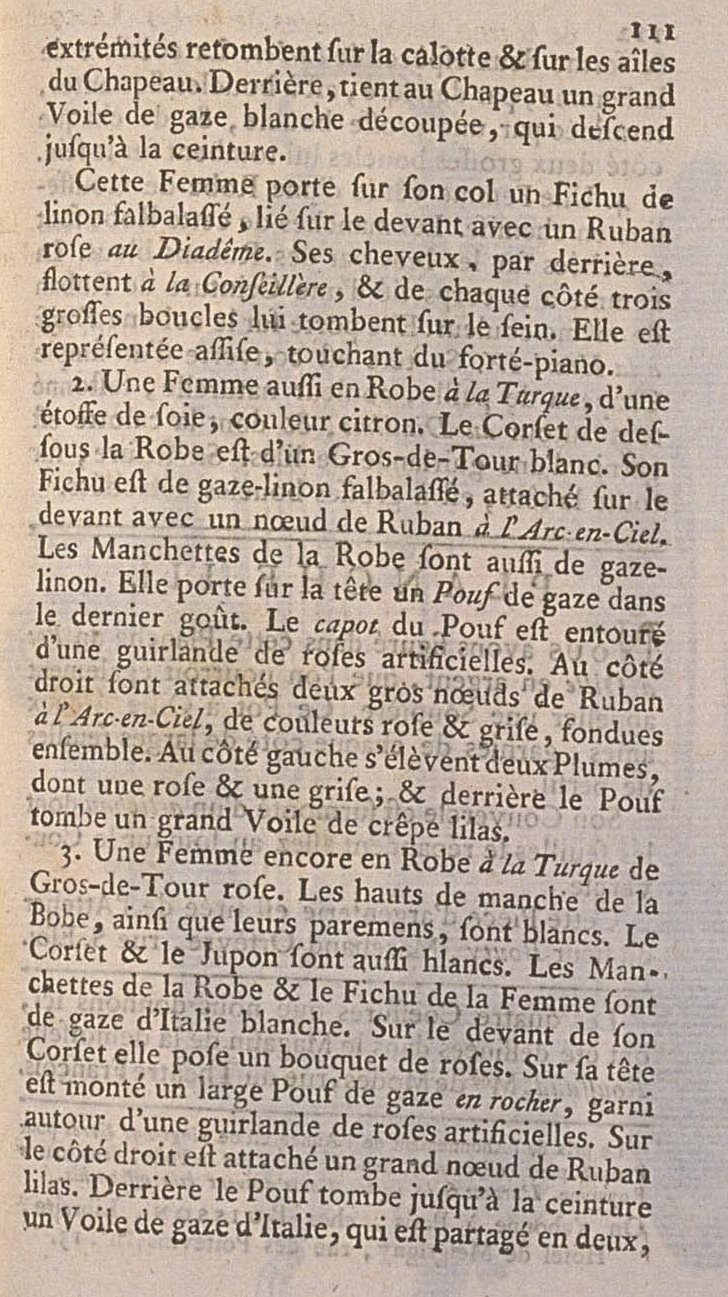 1. A Woman in a Robe à la Turque, of a pearl grey Indian taffeta, edged with a black silk Ribbon. This Woman is in second mourning. On her head, she wears a straw Hat, black, trimmed around the crown with striped black gauze made in diamond points. A pink Ribbon ties the crown. Around are raised at least twelve cock Plumes, flame colored, whose extremities fall back on the crown and on the wings of the Hat. Behind, a large Veil of pinked white gauze is held to the Hat, which descends to the waist.

This Woman wears on her neck a flounced linen Kerchief, tied on the front with a pink Ribbon au Diadême. Her hair, in the back, hangs à la Conseillère, and on each side three large curls fall on her chest. She is represented seated, playing the pianoforte.

2. A Woman also in a Robe à la Turque, of a silk fabric, lemon color. The Corset under the Gown is of a white gros de Tours. Her Kerchief of flounced linen-gauze, fastened on the from with a bow of Rainbow Ribbon. The Gown's Manchettes are also of linen-gauze. She wears on her head a gauze Pouf in the latest taste. The crown of the Pouf is wrapped with a garland of artificial roses. On the right side are attached two large bows of Rainbow Ribbon, in pink and grey, melting together. On the left side rise two Plumes, one of which is pink and one grey; and behind the Pouf falls a large Veil of lilac crêpe. 3. A Woman again in a Robe à la Turque of pink gros de Tours. The tops of the sleeves of the Gown, as well as their cuffs, are white. The Corset and Petticoat are also white. The Gown's Manchettes and the Woman's Kerchief are of white Italian gauze. On the front of her Corset is positioned a bouquet of roses. On her head is mounted a large Pouf of frothy* gauze, trimmed around with a garland of artifiial roses. On the right side is attached a large bow of lilac Ribbon. Behind the Pouf falls to the waist a Veil of Italian gauze, which is split in two, and forms two sort of lappets. The Woman's coiffure, in back, is in floating curls, ending with a large curl, and on each side two large buckles fall on her chest.

4. A Woman dressed in a muslin Gown en chemise. The sleeves of this Gown are fastened on the arms with blue Ribbons. The Woman has tied the body with a Belt of Ribbon of the same color. She wears on her chest a Ruff à la Henri IV. Her head is covered with a simple straw Hat, natural color, bound around au Diadême, and whose crown is trimmed with a lilac garland. Her hair, all over the head, is in large loose curls.

* is perhaps more likely to mean something to do with rocks; the "froth" definition of rocher really only relates to beer