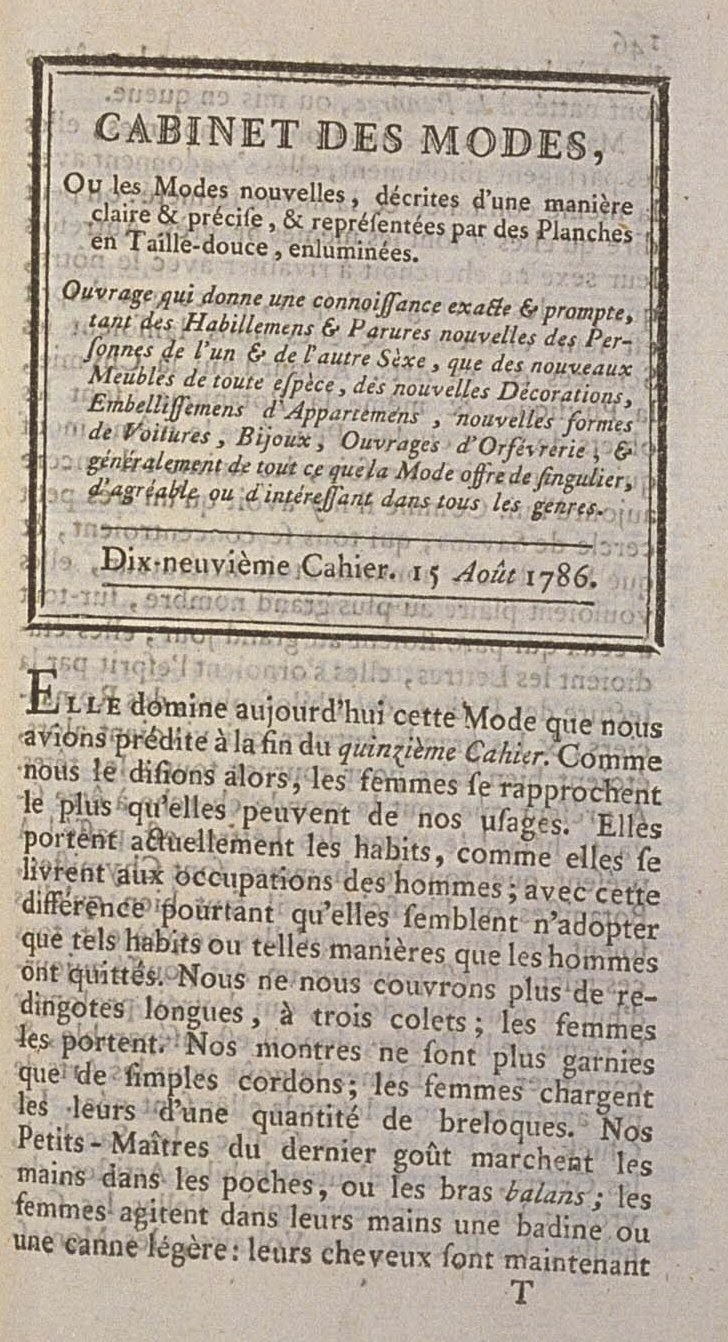 It dominates today, this Fashion hat we should have predicted at the end of the fifteenth Issue. As we would thus say it, women come as close as they can to our practices. They currently wear coats, as they engage in men's occupations; with this difference, however, that they seem only to adopt such coats or such manners as men have abandoned. We no longer cover ourselves with long redingotes, with three collars; women wear them. Our watches are now only decorated with simple cords; women load theirs with a quantity of charms. Our Petits-Maîtres of the latest taste walk with their hands in their pockets, or with dangling arms; women wave a stick or a light cane in their hands: their hair is now tied very-low in a thick cadogan, because ours are braided à la Panurge, or put in a queue. 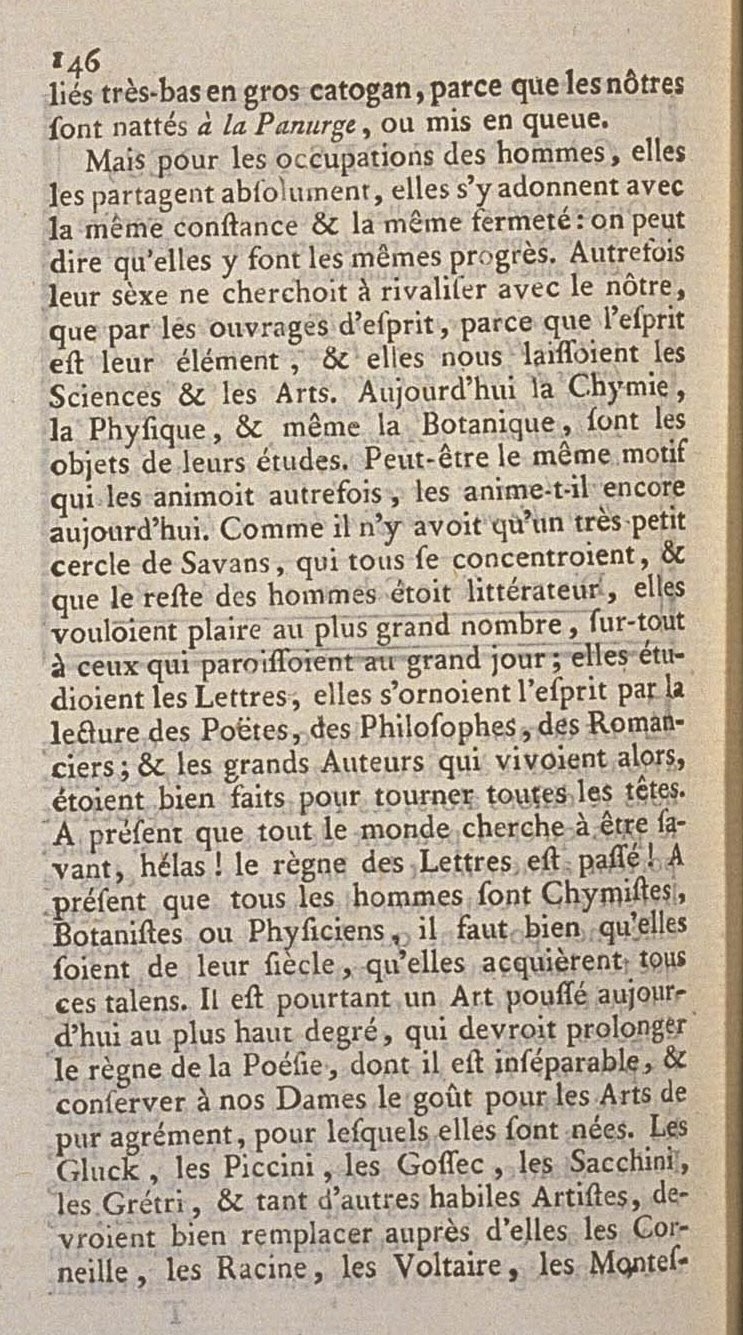 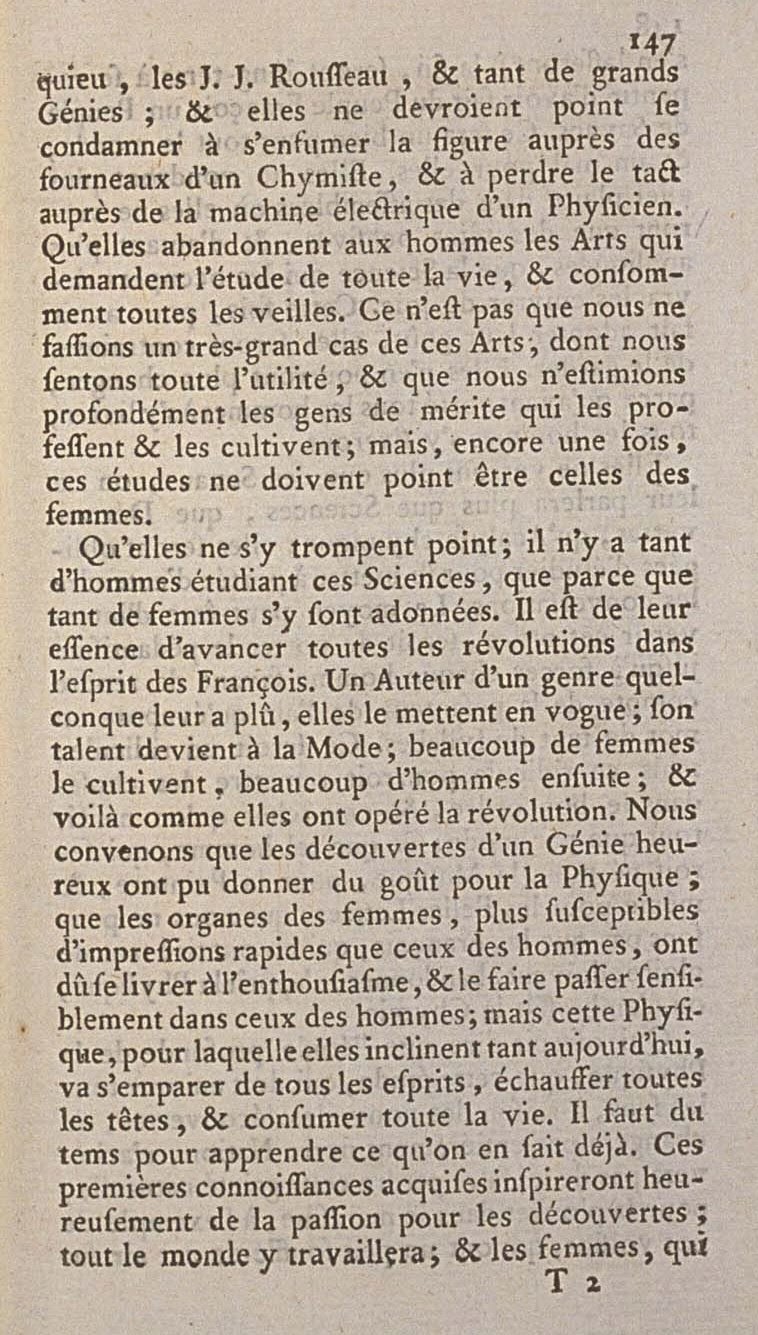 But for men's occupations, they share them absolutely, they become addicted with the same constancy and the same firmness: one can say that they make the same progress in them. Formerly their sex tried to rival ours, only in works of the mind, because the mind is their element, and they leave us Sciences and Arts. Today Chemistry, Physics, and even Botany are the objects of their studies. Maybe the same motive which drove them formerly, it still drives them today. As there was only a very little circle of Sages, who all focused themselves, and that the rest of the men were writers, women wanted to please the greatest number, overall those who appeared in broad daylight; they studied the Letters, they decorated their minds by reading the Poets, Philosophers, Novelists; and the great Authors who lived them, were well made to turn their heads. Now that everyone seeks to be wise, alas! the reign of Letters is passed! Now that all men are Chemists, Botanists, or Physicists, it is very necessary that women be of the same era, and that they acquire all these talents. It is however an Art pushed today to the highest degree, which must prolong the reign of Poetry, from which it is inseparable, and to preserve in our Ladies the taste for the Arts of pure pleasure, for which they are born. Gluck, Piccini, Gossec, Sacchini, Gretri, and such other skillful Artists, should well replace Corneille, Racine, Voltaire, Montesquieu, J. J. Rousseau, and such other great Geniuses with them; and they would never order them to smoke their faces in the furnaces of a Chemist, and to lose their sensitivity in a Physicist's electric machine. They may abandon to men the Arts which demand study for the whole life, and consume old age. It is not that we would make a very-great case for these Arts, of which we feel all the usefulness, and that we would not profoundly esteem the people of merit who profess and cultivate them; but, once again, these studies should never be those of women. 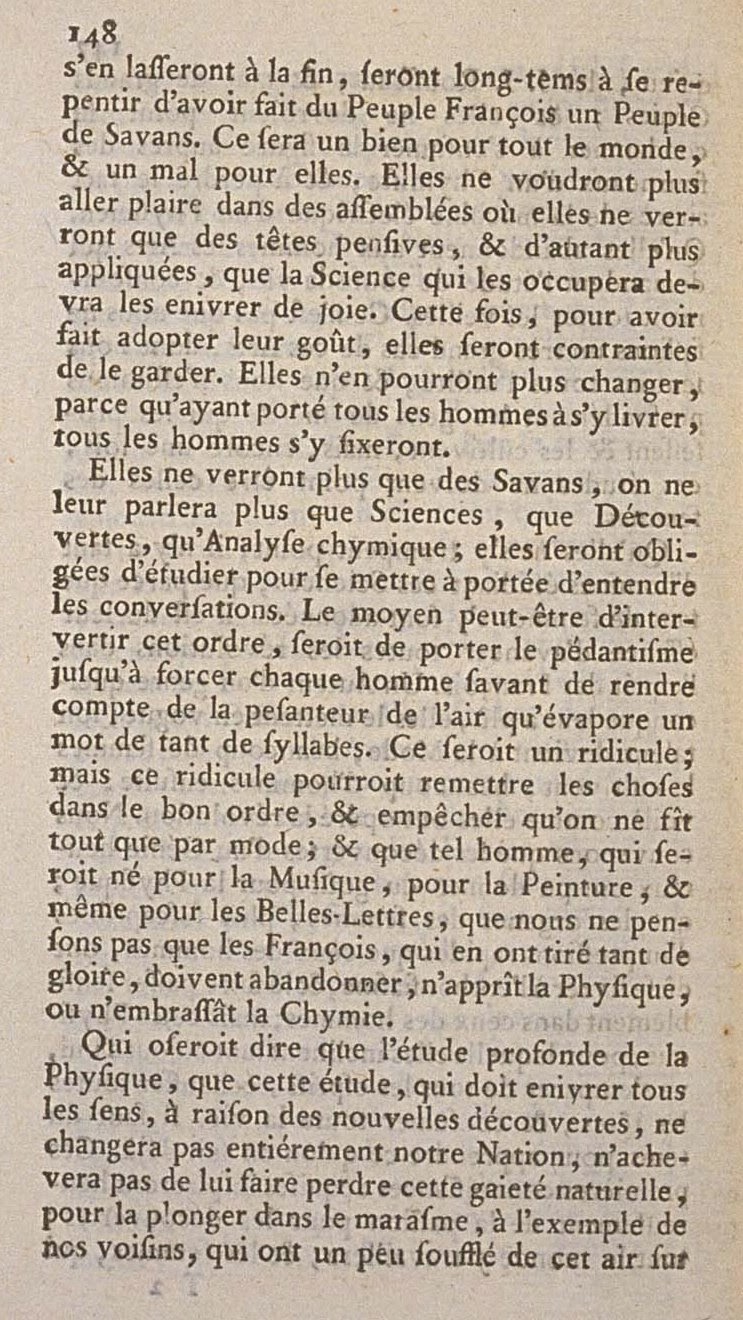 They should not be mistaken; there are so many men studying these Sciences, because so many women are engaged in it. It is in their nature to advance all the revolutions in the French mind. An Author of an ordinary type pleased them, they made him in vogue; his talent became Fashionable; many women cultivated him, make men followed; and thus they worked the revolution. We agree that the discoveries of a happy Genius have been able to give a taste for Physics; that the organs of women, more susceptible to rapid impressions than those of men, have been able to give way to enthusiasm, and pass it sensibly to those of men; but this Physics, for which they are so inclined today, will seize all minds, heat all heads, and consume one's whole life. It is necessary at times to learn what is already known of it. These first acquired understandings will happily inspire passion for discoveries; everyone will find that; and the women, who will leave it at last, will for a long time repent of having made the French People a Wise People. It will be a good thing for everyone, and a bad thing for themselves. They will no longer want to please in the assemblies where they only see pensive heads, and even more applied, that the Science which occupies them will make them drunk on joy. This time, in order to have made their taste be adopted, they will be constrained to keep it. They will no longer be able to change it, because having focused all men on being engaged with it, all men will be fixed on it.


They will only see Sages, they will only be spoken to of Science, Discoveries, chemical Analyses; they will be obligated to study to put listening to conversations within easy reach. The method may-be of inverting this order, would be of continuing the pedantry to force each wise man to account for the heaviness of the air that is released with a word of several syllables. This would be ridiculous; but this ridiculousness could put things back into the right order, and prevent it returning by any means; and that such a man, who would be born for Music, for Painting, and even for Belles-Lettres, that we do not think that the French, who have drawn such glory from these, should abandon them, not to learn Physics, nor to embrace Chemistry.

Who would dare to say that profound study of Physics, that this study, which must intoxicate all the senses, due to new discoveries, will not entirely change our Nation, will not finish by making us lose this natural gaiety, to plunge it into stagnation, as in the examples of our neighbors, who have breathed a little of this air in our climates? It may reach the greater part of our Ladies, who will no longer worry about engaging in study, and who will have time to enjoy their ideas, will be reduced to only listening to love-speaking in Novels, to which they will be forced to return, almost like the Ladies our neighbors, who nearly always wander all alone in immense parks, Tom Jones or Clarissa, or Young* in their hands.