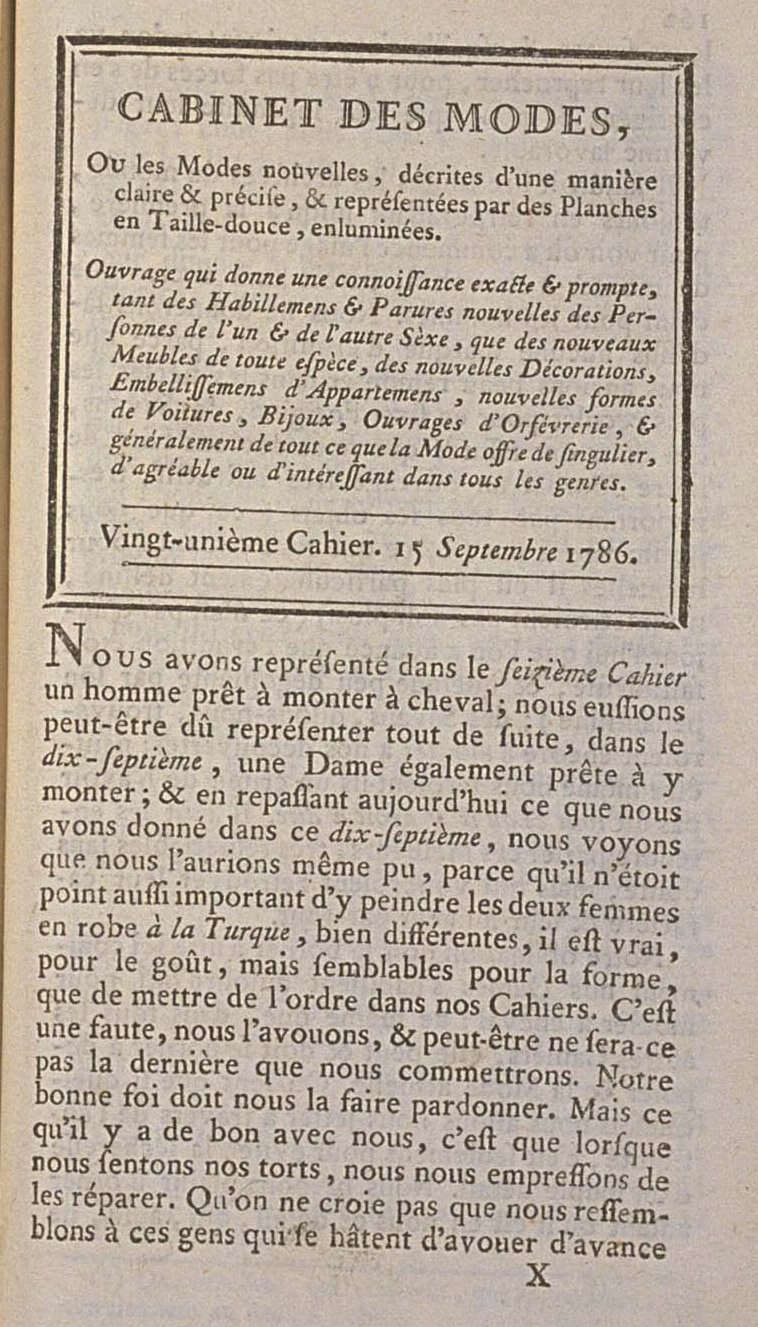 WE represented in the sixteenth Issue a man ready to ride a horse; we would have perhaps had to represent immediately, in the seventeenth, a Lady equally ready to ride; and in coming back today what we gave in this seventeenth, we see that we would have the same, because it was never as important to paint the two women in robes à la Turque, very different, it is true, in taste, but similar in form, that to bring order to our Issues. It is a fault, we confess, and maybe it will not be the last that we commit. Our good faith makes us pardon it. But what is good with us, is that when we feel our wrongs, we rush to repair them. One doesn't believe that we resemble these people who hasten to confess in advance their faults, when they perceive that they are going to be reproached, in order not to be forced to correct them, and in order that their ingenuity becomes them favorably. 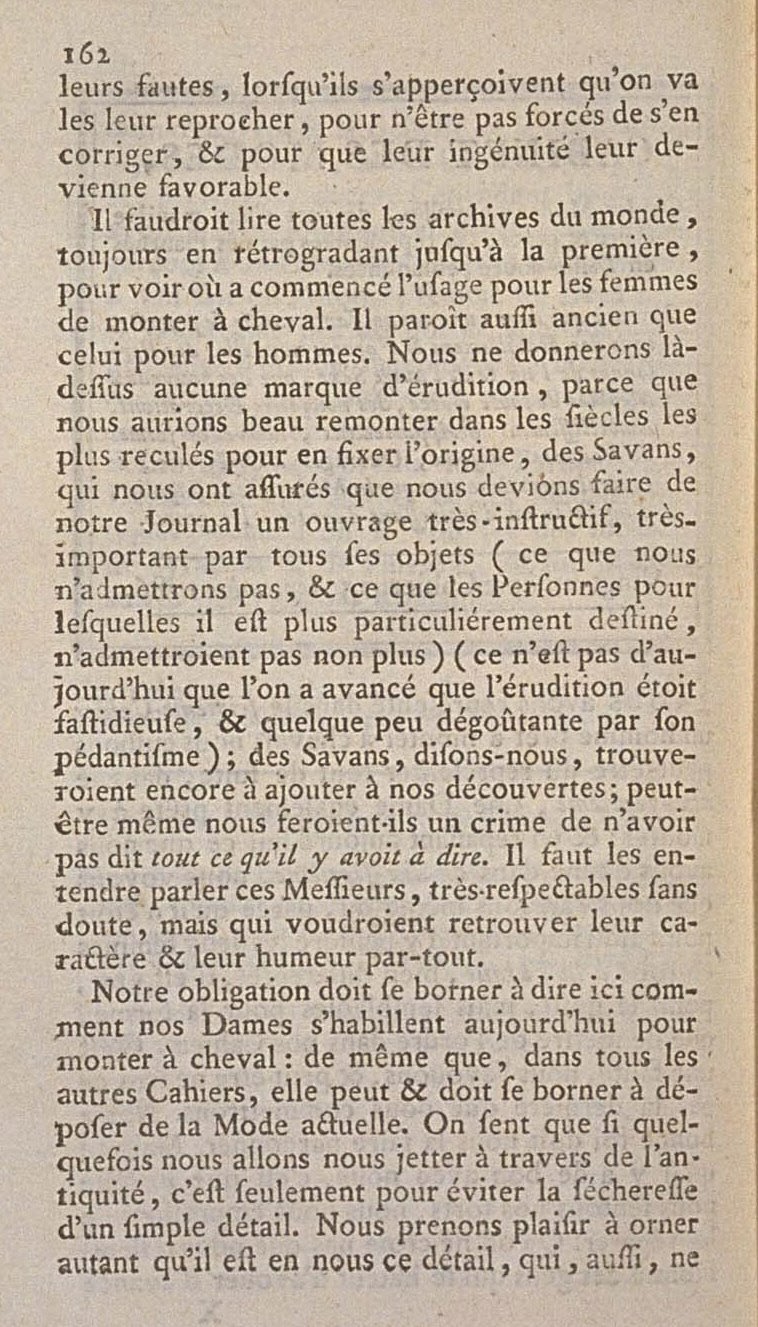 It would be necessary to read all the archives of the world, always going back to the first, to see where the practice of women riding horses began. It seems as ancient as men doing it. We will not give below any mark of erudition, because we would have to go back to the most remote eras to fix its origin, some Scholars, who have assured us that we should make our Journal a very-instructive work, very-important on all its subjects (what we do not admit, and what the People for which it is most particularly define, did not admit either) (it is not today that it has been advanced that erudition was fastidious, and a little bit distasteful in its pedantry); some Scholars, said we, found to add still to their discoveries; perhaps they would even make us a crime of not having said everything that there was to say. It is necessary to listen to these Messieurs speak, who are very-respectable without a doubt, but who wanted to find again their character and their humor everywhere. 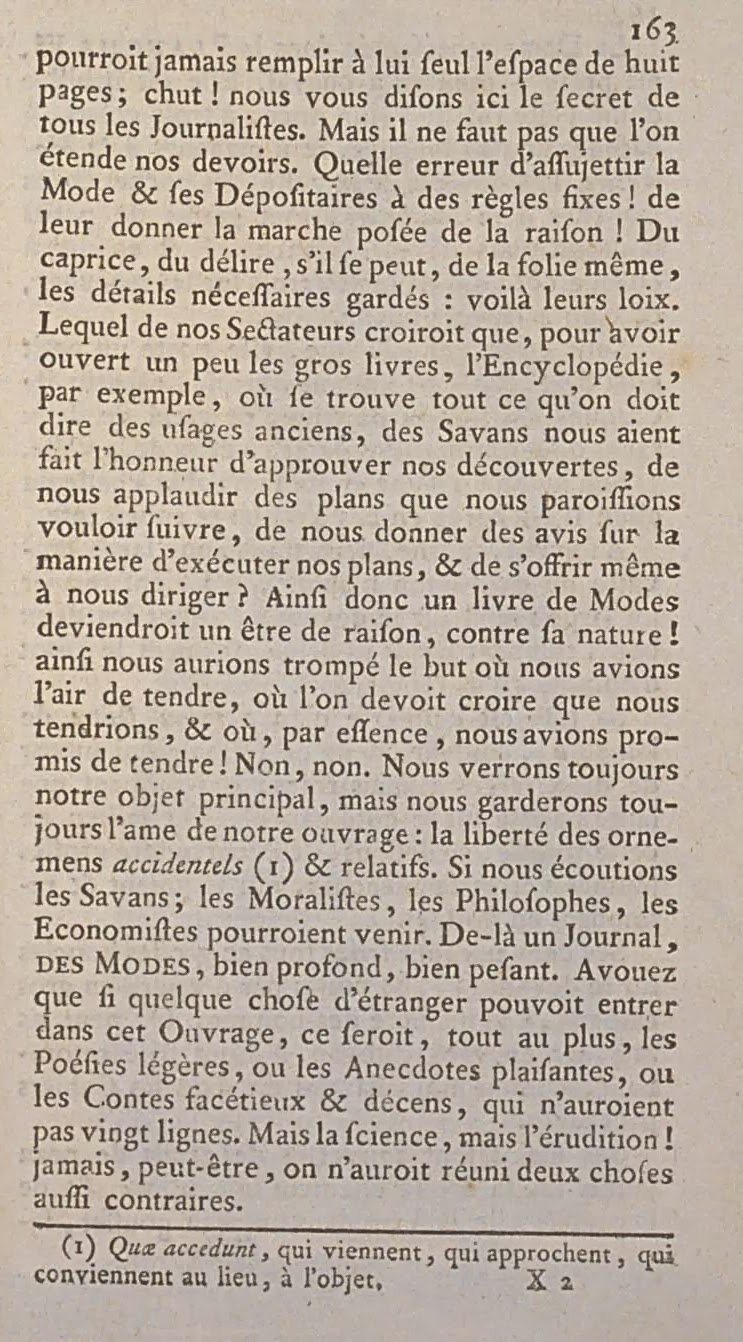 Our obligation must be limited to saying here how our Ladies dress today for riding: the same as, in all the other Issues, it can and must be limited to setting down the current Fashion. One feels that if sometime we are going to throw ourselves across antiquity, it is only to avoid the barrenness of a simple detail. We take pleasure in decorating as far as it is in us this detail, which, also, could never fill only the space of eight pages; hush! we tell you here the secret of all Journalists. But it is not necessary that one extends our duties. What an error to subject Fashion and her Trustees to fixed rules! to give them progress positioned on reason! On caprice, on delirium, if possible, on the same folly, the necessary details guarded.: there are their laws. Which of our Votaries believed that, for having opened large books a little, the Encyclopedia, for example, where is found everything that one must say of the old customs, the Scholars have done us the honor of approving our discoveries, of applauding us for plans that we would seem to want to follow, of giving us advice on the manner of executing our plans, and of offering even to direct us? And therefore a book of Fashions would become a thing of reason, against its nature! therefore we would have tricked the purpose which we would have the air of tendering, which one should believe that we should tender, and which, in essence, we should have promised to tender! No, no. We will always see our principal object, but we will always guard the soul of our work: the liberty of accidentel (1) and relative ornaments. If we should listen to Scholars; Moralists, Philosophers, Economists could come. And there is a Journal, ON FASHIONS, very profound, very heavy. Admit that if something foreign could enter this Work, it would be, at most, light Poetry, or pleasant Anecdotes, or facetious and decent Stories, which wouldn't be twenty lines long. But science, but erudition! never, perhaps, would one bring together two so contrary things. 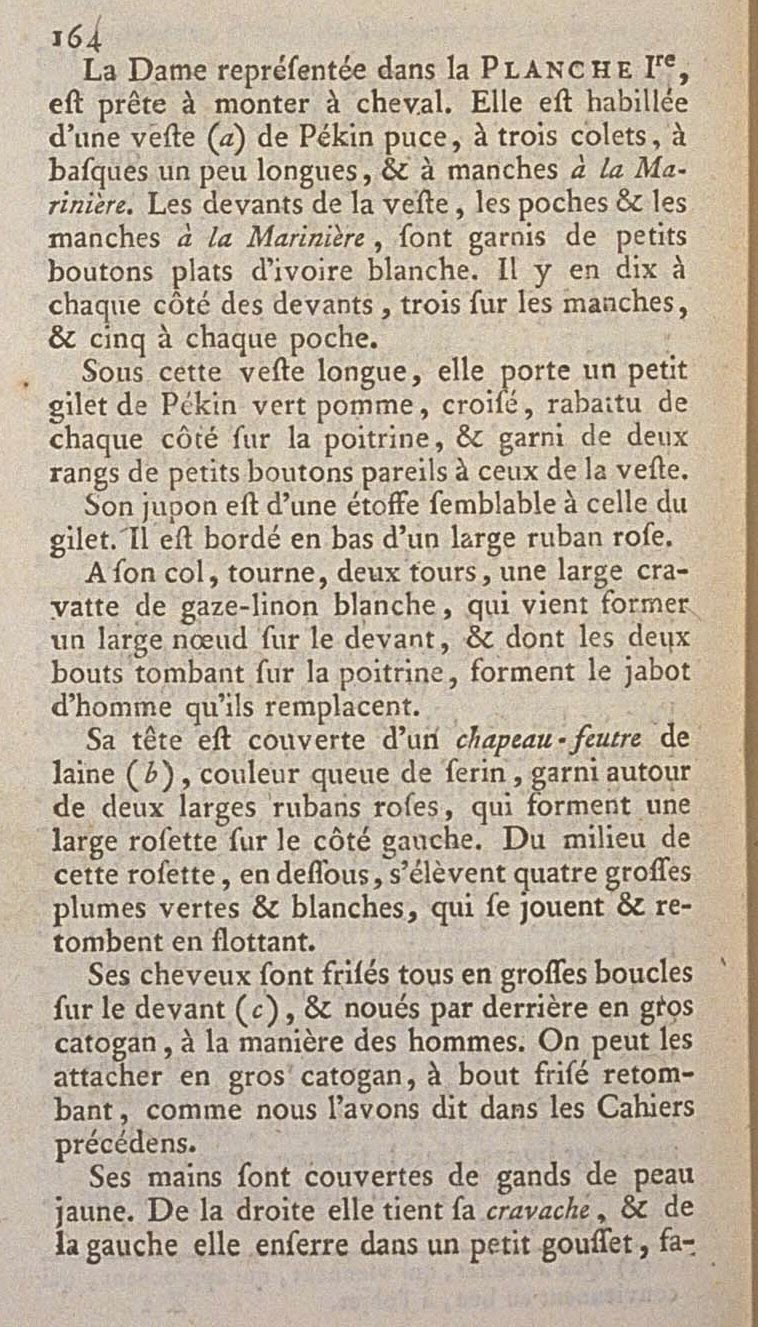 (1) Quae accedunt, which comes, which approaches, which agrees with instead, to the object.


The Lady represented in the Ist PLATE is ready to ride. She is dressed in a coat (a) of puce Pekin, with three collars, with slightly long basques, and with sleeves à la Marinière. The fronts of the coat , the pockets and sleeves à la Marinière, are trimmed with little flat buttons of white ivory. There are ten of them on each side of the fronts, three on the sleeves, and five on each pocket.

Under this long coat, she wears a little gilet of apple green Pekin, crossed, turned down on each side on her chest, and trimmed with two rows of little buttons matching those on the coat.

Her petticoat is a stuff matching that of the gilet. It is edged on the bottom with a wide pink ribbon. 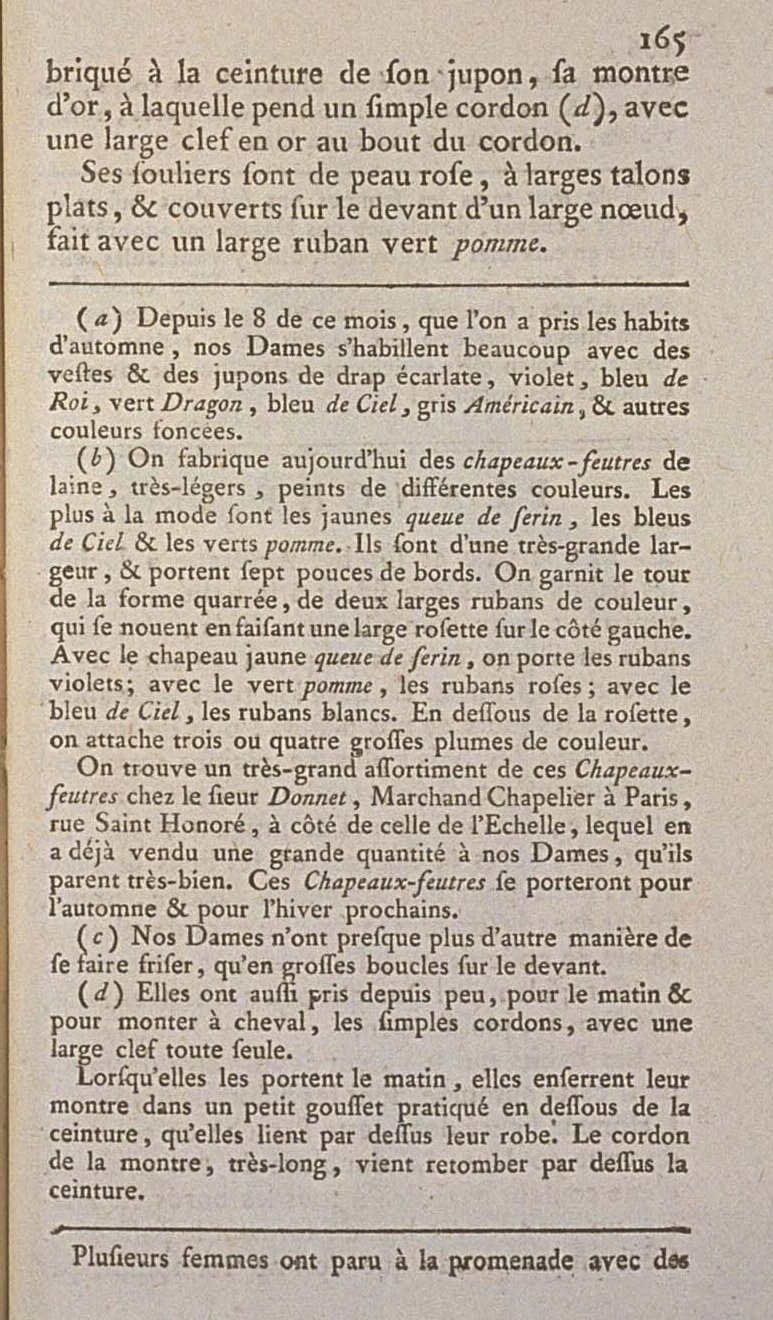 On her neck, wrapped, twice, a wide cravat of white linen-gauze, which comes to form a large bow on the front, and whose two ends falling on the chest, form the man's jabot that they replace.

Her head is covered with a felt-hat of wool (b), canary's tail color, trimmed around with two wide pink ribbons, which form a large rosette on the left side. From the middle of this rosette, beneath, rise four large green and white plumes, which play and fall back in floating.

Her hands are covered with gloves of yellow leather. In the right she holds her whip, and in the left she encloses in a little gusset, made in the waist of her petticoat, her gold watch, from which hangs a simple cord (d), with a large gold key at the end of the cord.

Her shoes are of pink leather, with large flat heels, and covered in front with a large bow, made with a wide apple green ribbon.

(a) Since the 8th of this month, when autumnal coats were put on, our Ladies frequently dress in jackets and petticoats of scarlet, violet, King's blue, Dragoon green, Sky blue, American grey, and other dark colored wool.

(b) Today felt-hats are made of wool, very-light, dyed different colors. The most fashionable are of canary's tail yellow, Sky blue, and apple green. They are of a very-large width, and have seven-inch-wide brims. The crown is trimmed equally all around, with two wide colored ribbons. which are tied to make a large bow on the left side. With the canary's tail yellow hat, violet ribbons are worn; with apple green, pink ribbons; with Sky blue, white ribbons. Below the bow, three or four large colored plumes are attached

A very-great assortment of Felt-hats are found in the shop of M. Donnet, Merchant Hatmaker of Paris, rue Saint Honoré, next to that of l'Echelle, which has already sold a great quantity to our ladies, that seem very-well. These Felt-hats are worn in the autumn and next winter.

(c) Our Ladies hardly have any other manner of curling their hair, than in large curls in the front.

(d) They have also taken since a little while ago, for the morning and for riding, simple cords, with a large single key.

When they wear them in the morning, they hold their watches in a little pocket inside their belts, that they tie over their gowns. The watch cord, very-long, falls back over the belt.
---
Several women were seen on the promenade with caracos whose bodices were white; and the collars, the basques, and the saboted sleeves were puce, pink, violet, black, yellow, green, or lilac.
---
If at all times women had been in the habit of riding, recently our Ladies have adopted that of going in a cabriolet without an Outrider. They go alone, they in pairs, but not with men. They drive themselves; they are only followed by a Jockey or Manservant, who cries to the passersby to move back. You see how much they anticipate all men's manners today!
1780s 18th century Cabinet des Modes riding habit