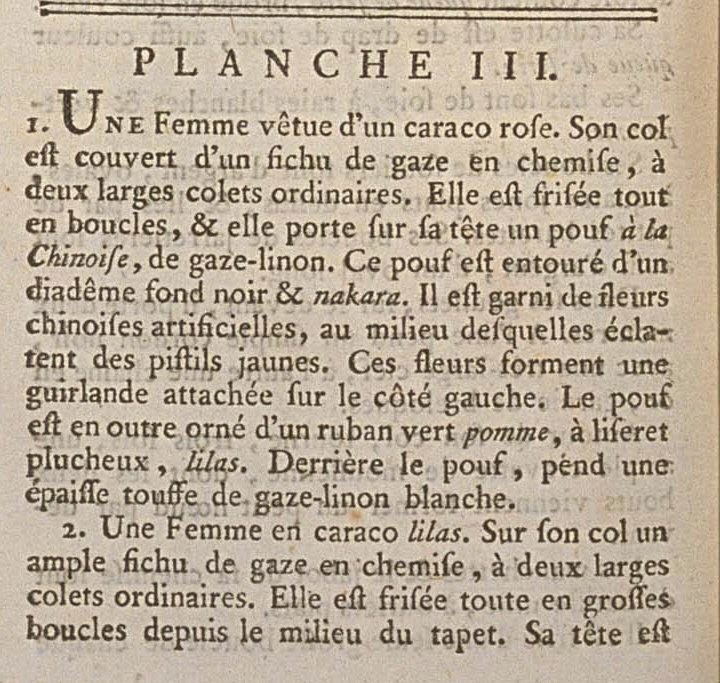 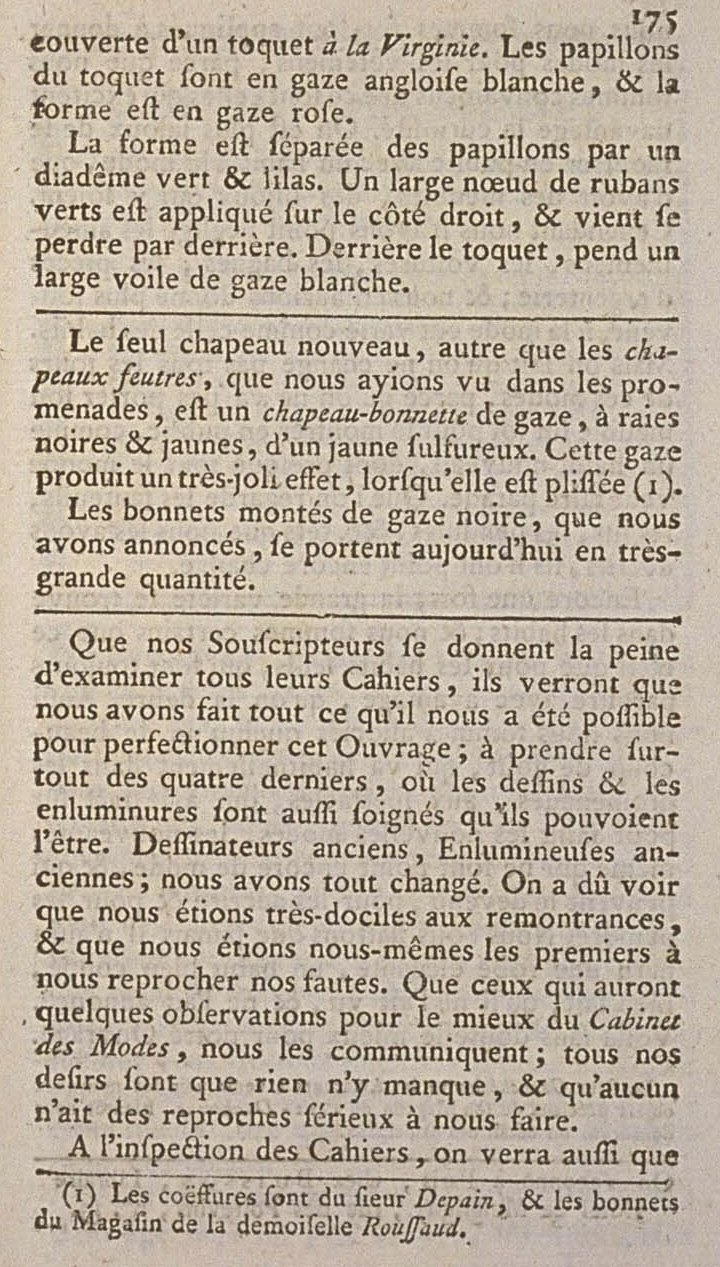 1. A Woman dressed in a pink caraco. Her neck is covered with a gauze kerchief en chemise, with two large ordinary collars. Her hair is done all in curls, and she wears on her head a pouf à la Chinoise, of linen-gauze. This pouf is wrapped with a diadême* with a black and nakara ground. It is trimmed with artificial chinese flowers, in the middle of which glow yellow pistils. These flowers form a garland fastened on the left side. The pouf is furthermore decorated with an apple green ribbon, with fluffy, lilac selvages. Behind the pouf hangs a thick puff of white linen-gauze.


2. A Woman in a lilac caraco. On her neck a full kerchief of gauze en chemise, with two large ordinary collars. Her hair is done all in large curls from the middle of the tapet. her head is covered with a toquet à la Virginie. The ruffles of the touquet are in white english gauze, and the crown is in pink gauze.

The crown is separated from the ruffles by a green and lilac diadême.* A large bow of green ribbon is applied on the right side, and comes to be lost in the back. Behind the toquet hangs a wide veil of white gauze. 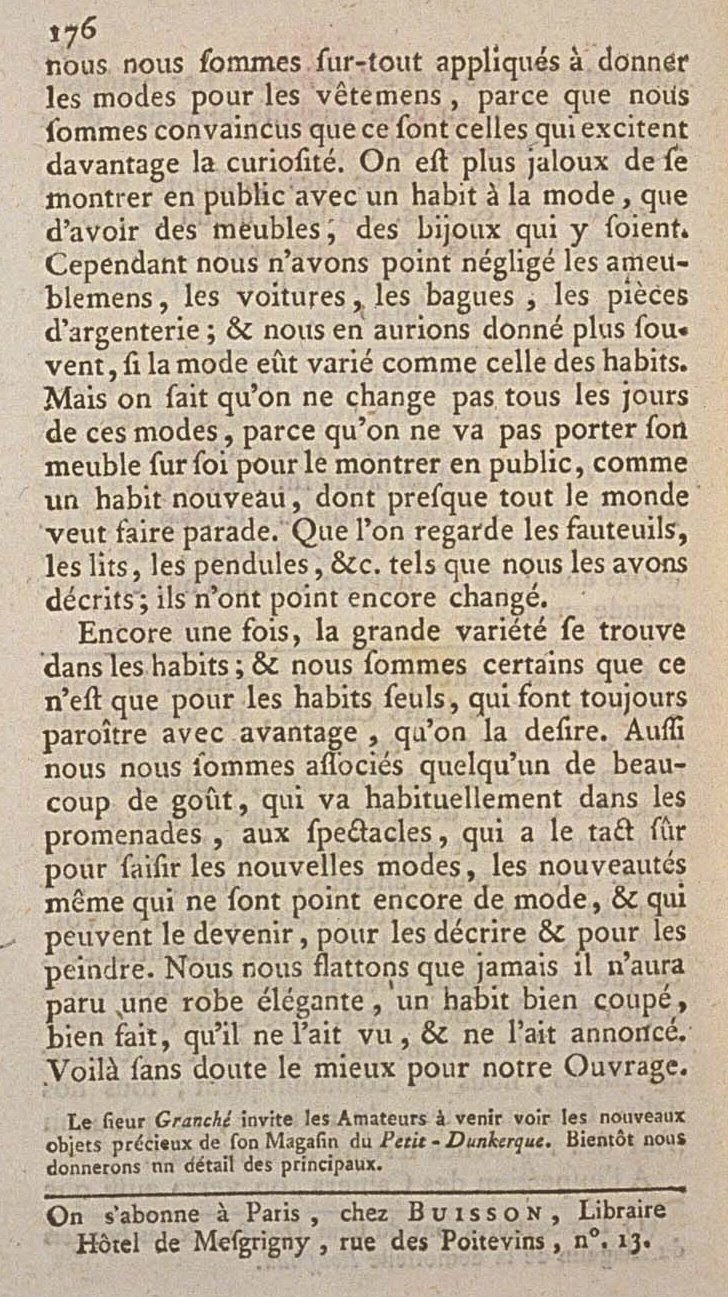 The only new hat, other than the felt hats, that we have seen in the promenades is a chapeau-bonnette of gauze, with black and yellow stripes, of a sulfurous yellow. This gauze produces a very-pretty effect, when it is pleated (1).

The caps made of black gauze, that we have announced, are worn today in a very great quantity.

(1) The coiffures are by M. Depain, and the caps from the Shop of Mlle Roussaud.
---
If our Subscribers are given the pain of examining all their Issues, they will see that we have made all it has given us possible by perfecting this Work; to take overall the four most recent, where the designs and illuminations are as fashionable as they can be. Ancient Designers, ancient Illuminations; we have changed all. One had to see that we would be very-docile to remonstrances, and that we would be ourselves the first to reproach our faults. Those which will have some observations for bettering the Cabinet des Modes may communicate them to us; all our desire is that nothing be lacking from it, and that no-one has any serious reproaches to make of us.

In inspecting the Issues, one will see also that we have overall applied ourselves to giving the fashions for dress, because we are convinced that these which more excite curiosity. One is more jealous of appearing in public in fashionable clothing, than in having furniture, jewelry that is fashionable. However we have not neglected furnishings, coaches, rings, pieces of silverwork; and we would have given them more frequently, if fashion had changed for them as quickly as for clothing. But you know that these fashions do not change every day, because furniture is not carried on oneself to be shown in public, like a new coat, which nearly everyone wants to parade in. One may look at armchairs, beds, pendulum clocks, etc. such as we have described; they have still not changed.

One more time, great variety is found in dress; and we are certain that this is only for dress, which always appears to advantage, when one wants it to. Also we have partnered with someone of great taste, who will habitually go in the promenades, to the spectacles, who has the tact to seize new fashions, even the novelties which are still not fashion, and which could become it, to describe them and to paint them. We flatter ourselves to have never shown an elegant gown, a well-cut, well-made coat, that he had not seen, and announced it. This is without a doubt the best thing about our Work.

M. Granché invites Fans to come see the new precious objects in his Shop at the Petit-Dunkerque. Soon we will give a detail of the principal ones.
1780s 18th century Cabinet des Modes