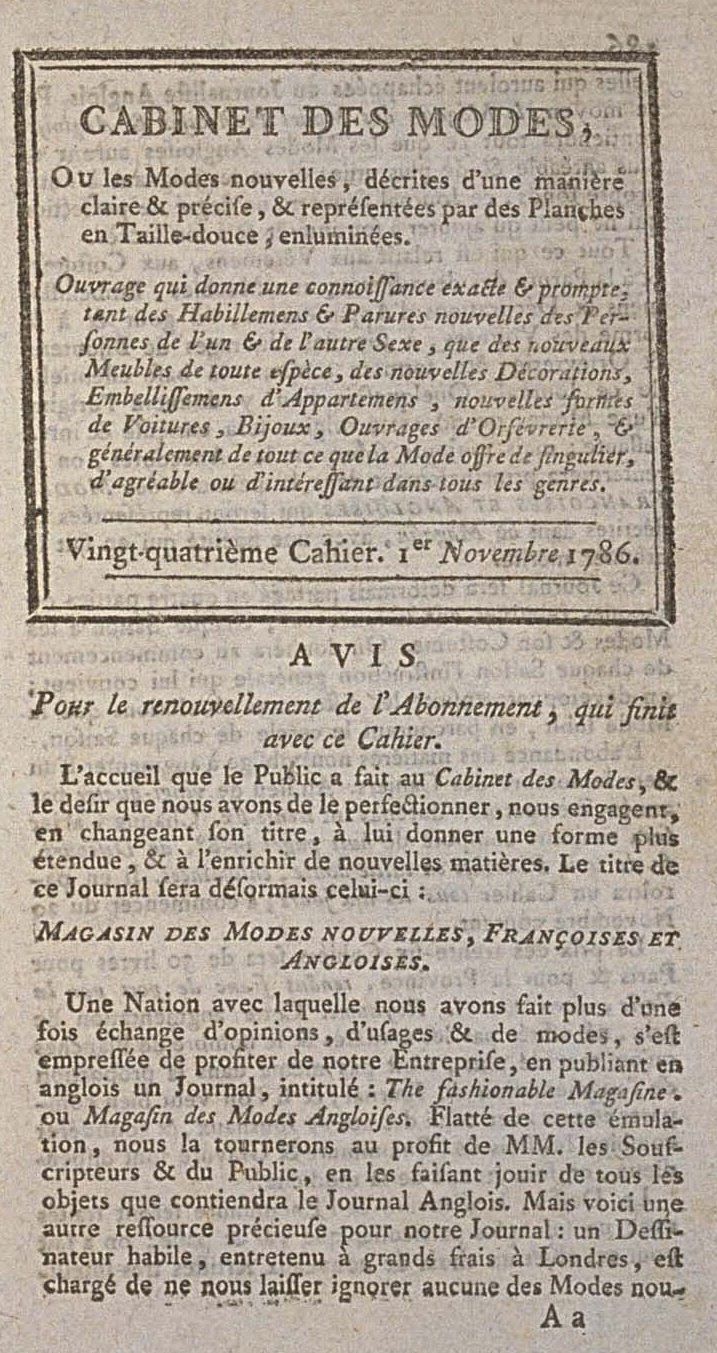 To renew a Subscription, which ends with this Issue.

The reception that the Public gave to the Cabinet des Modes and the desire that we have of perfecting it engage us, as we change the title to give it a more extensive form and to enrich it with new material. The title of this Journal will be henceforth thus: 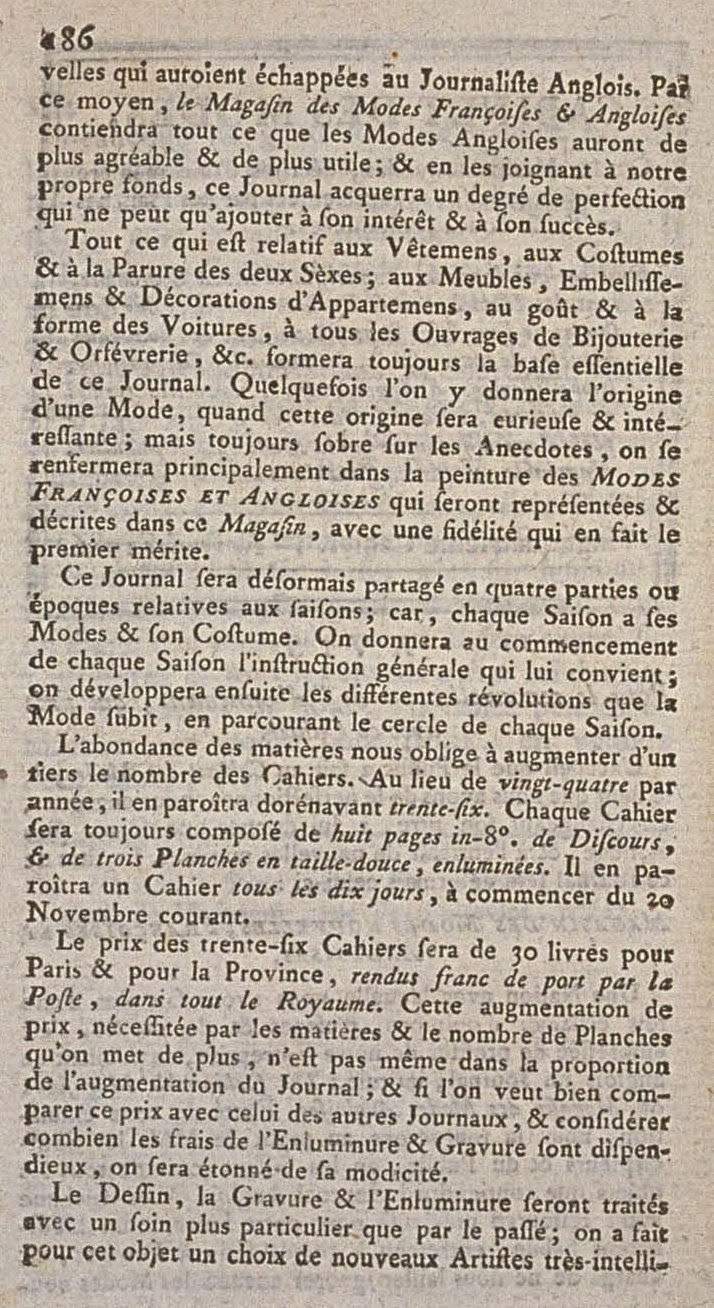 A Nation with which we have made more than once an exchange of opinions, customs, and fashions is zealous to profit from our Enterprise, in publishing in English a Journal, titled: The fashionable Magasine or Magasin des Modes Angloises. Flattered by this imitation, we will turn it to the profit of Messrs. the Subscribers and the Public, in enjoying all the objects that will be in the English Journal. But here is another precious resource for our Journal: a skillful Designer, maintained at great expense in London, is charged with not letting us ignore any new Fashions which would have escaped the English Journalist. By this means, le Magasin des Modes Françoises et Angloises will contain everything in the English Fashions that is most agreeable and most useful; and in joining them with our own money, this Journal will acquire a degree of perfection which can only add to its interest and its success.

All that is relative to Garments, to Outfits, and the Parure of the two Sexes; to Furniture, Embellishments, and Home Decoration, to the taste and form of Carriages, to all the Works of Jewelry and Silversmithing, etc. will always form the essential base of this Journal. Sometimes the origin of a Fashion will be given there, when this origin is curious and interesting; but always abstemious on Anecdotes, it will be kept principally on the painting of the FRENCH AND ENGLISH FASHIONS which will be represented and described in this Magazine, with a fidelity which will be its premier merit. 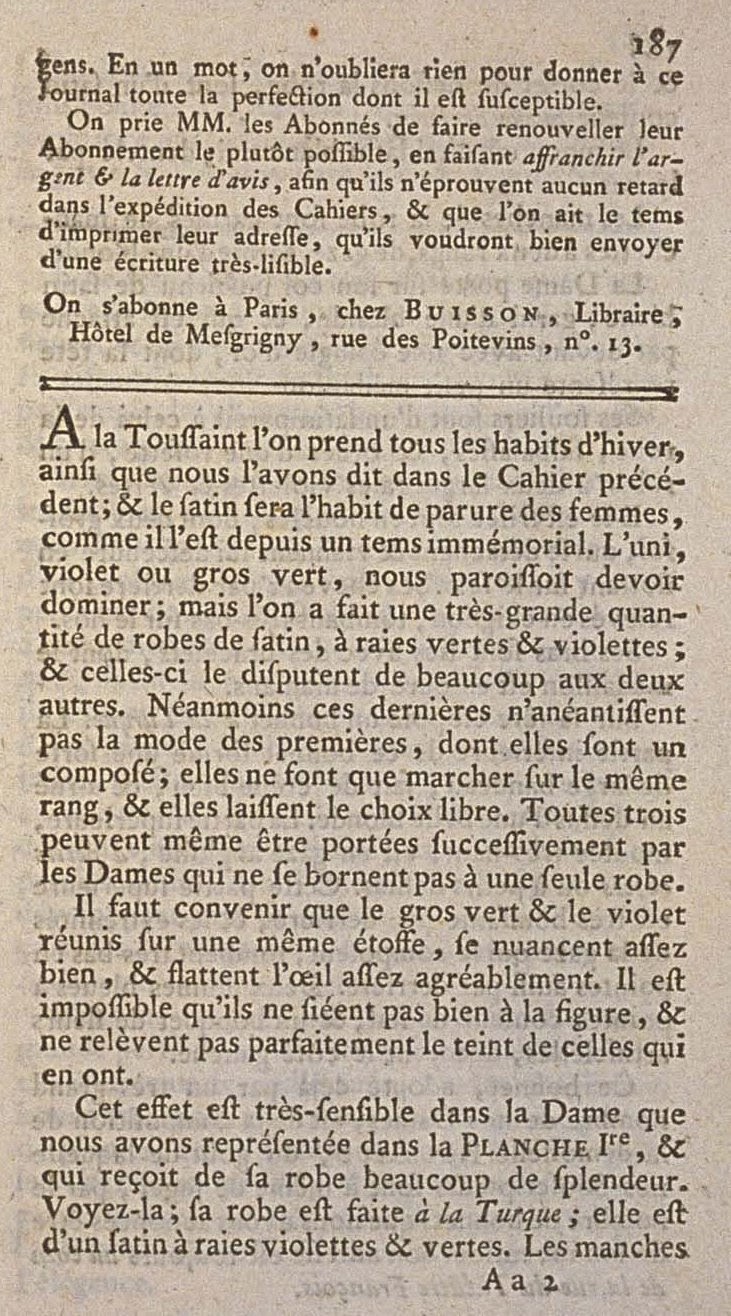 This Journal will henceforth be split in four parts or epochs relative to the seasons; for, each Season has its Fashion and its Costume. General instruction will be given at the beginning of each Season which it is appropriate to; the different revolutions that Fashion undergoes will be developed, in browsing the circle of each Season.

The abundance of material obliges us to add a third again to the number of our Issues. Instead of twenty-four per year, there will be henceforth thirty-six. Each Issue will always be composed of eight pages in octavo of Discourse, and three Plates in intaglio, illuminated. An Issue will appear every ten days, to commence on the next 20th of November. 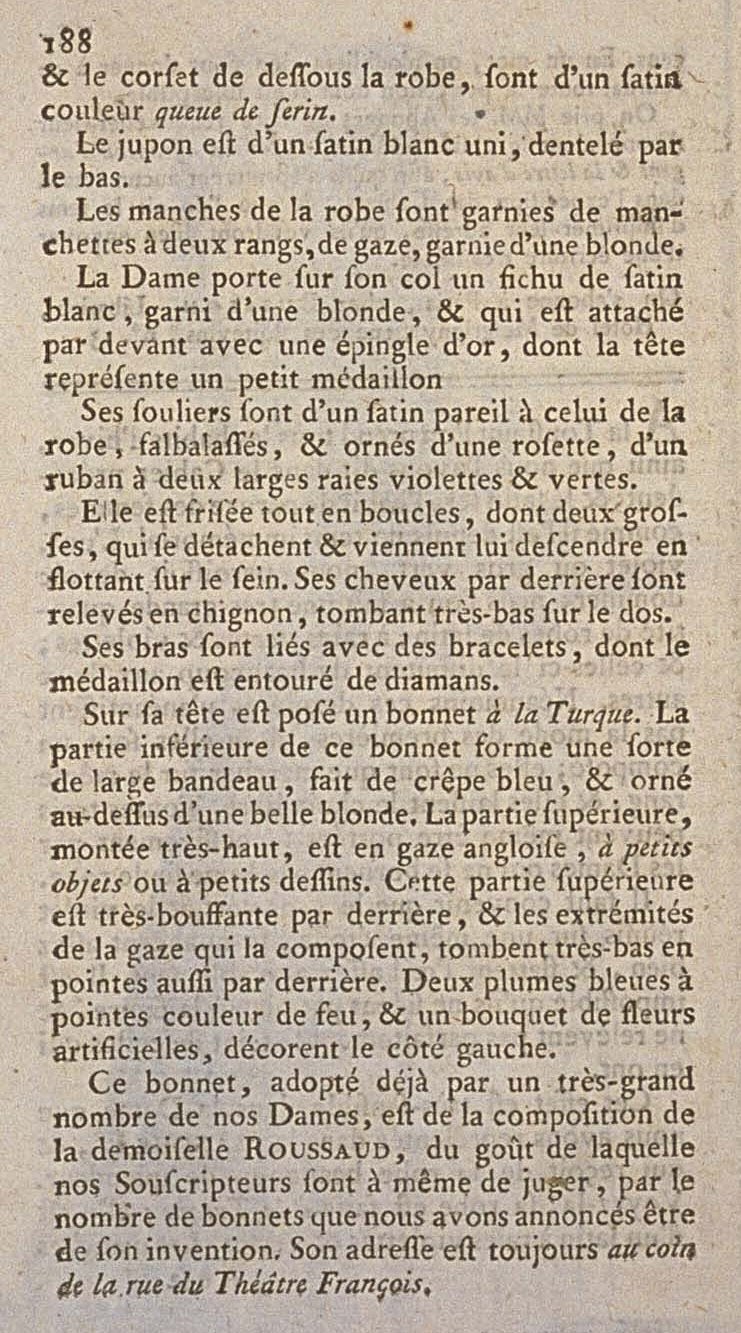 The price of thirty-six Issues will be 30 livres for Paris and the Provinces, prepaid by the Post, in the whole Kingdom. This increase in price, necessary for the material and number of Plates that are being added, is not even in proportion to the increase in the Journal; and if you really want to compare this price to that of other Journals, and consider how expensive the Illumination and Engraving are, you will be stunned at how low it is.

The Design, the Engraving, and the Illumination will be treated with a more particular care than in the past; we have made for this reason a choice of new very-intelligent Artists. In a word, nothing will be forgotten to give this Journal all the perfection of which it is capable.

We pray Messrs. the Subscribed to renew their Subscriptions as soon as possible, by sending money and a letter, in order to experience no delay in sending the Issues, and to have the time to print their address, that they will greatly want to send in a very-legible letter. 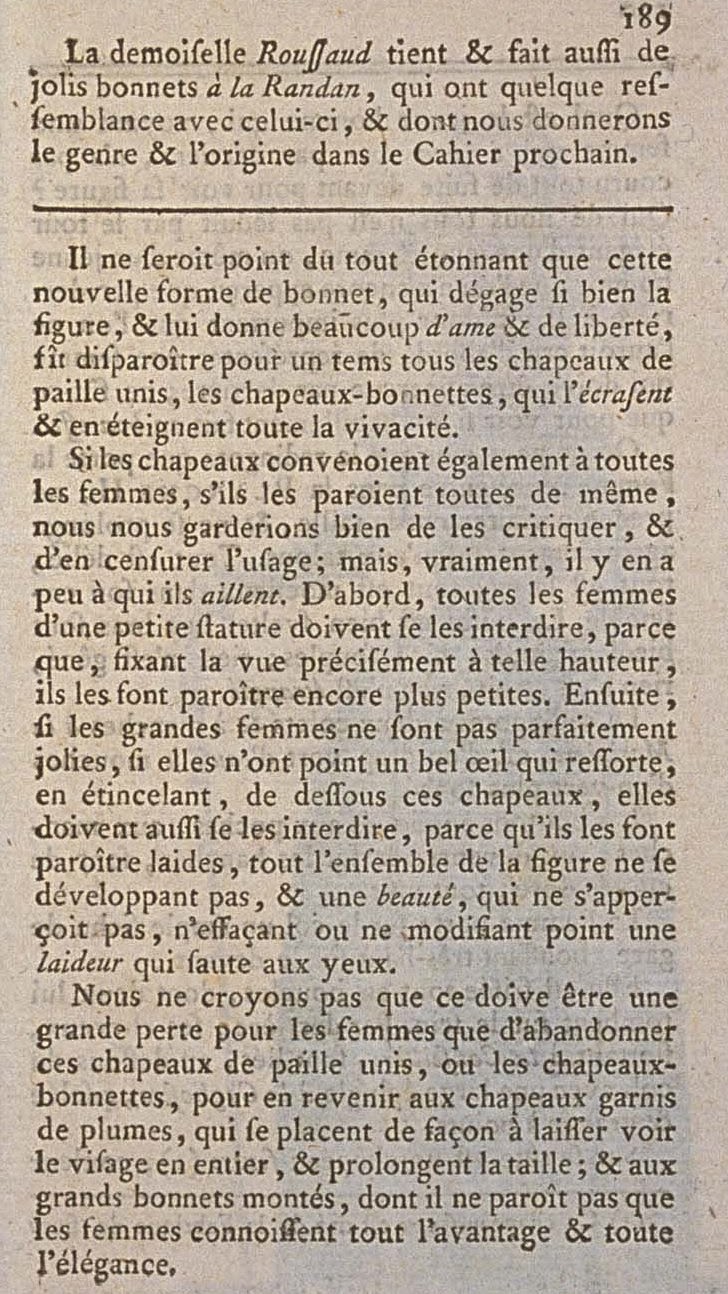 On All Saints' Day all the winter coats are put on, as we said in the preceding Issue; and satin will be the attire for women, as it has been since time immemorial. Plain, violet or dark green, seem to us to have dominated; but  a very-great quantity of satin gowns, with green and violet stripes, are made; and these vie greatly with the two others. However these latter annihilate the fashion of the first, of which they are composed; they only go together on the same row, and they allow free choice. All three can even be worn successively by the Ladies who confine themselves to only one gown.

It is necessary to admit that dark green and violet united on the same fabric, shade into each other rather well, and flatter the eye agreeably. It is impossible for them not to well suit the figure, and not to relieve perfectly the colors in them.

This effect is very-delicate in the Lady that we have represented in the IST PLATE, and who received much splendor for her gown. Look: her gown is made à la Turque; she is in a satin with violet and green stripes. The sleeves and the corset under the gown are of a canary's tail colored satin.

The petticoat is a plain white satin, scalloped at the bottom.

The Lady wears on her neck a kerchief of white satin, trimmed with blonde, and which is fastened in front with a gold pin, on the head of which is represented a little medallion.

Her shoes are of a satin matching that of the gown, flounced, decorated with a bow, of a ribbon with two wide violet and green stripes.

Her hair is done all in curls, of which two large ones are detached and hang over her chest. Her hair in the back is pulled up in a chignon, falling very low on the back.

Her arms are bound with bracelets, with medallions surrounded by diamonds.

On her head is positioned a cap à la Turque. The lower part of this cap forms a sort of wide bandeau, made of blue crêpe, and decorated on top with a beautiful blonde. The upper part, mounted very-high, is in English gauze, with little objects or with little designs. This upper part is very-puffed in the back, and the ends of the gauze which makes it up fall very-low in points also in the back. Two blue plumes with flame-colored points and a bouquet of artificial flowers decorate the left side.

This cap, already adopted by a very-great number of our Ladies, is the composition of Mlle ROUSSAUD, whose taste our Subscribers can judge by the number of caps that we have announced to be her invention. Her address is still at the corner of the rue de la Théâtre Française.

If the hats equally suit all women, if they seem all the same, we would guard ourselves well from critiquing them, and from censuring their usage; but, truly, there are little for whom they go. First, all the women of a little stature must be forbidden them, because, fixing the gaze precisely at such a height, they appear even smaller. Then, if tall women are not perfectly pretty, if they do not have a good eye which stands out, in gleaming from under the hat, they must be forbidden from them also, because they will appear ugly, the whole ensemble of the face not being developed, and beauty, which was not perceived, neither erasing nor modifying an ugliness which meets the eyes.

We do not believe that this must be a great loss to the women that leave off these plain straw hats, or the chapeaux-bonnettes, in order to come back to hats trimmed with plumes, which are placed in such a fashion as to allow the whole face to be seen, and lengthen the size; and to the large mounted caps, of which it seemed that women did not know all the advantage and all the elegance.
1780s 18th century Cabinet des Modes turque