July 17, 2014
Dress forms are pretty important for sewing, so I wanted one for a long time. My first was an old, hollow adjustable form, the fabric peeling off, a hair smaller than me (and the pieces cockeyed) when fully extended - at times I thought about covering it with two layers of pantyhose and stuffing it with fabric, but just getting a better form made more sense, since it was all rusty and gross.

The Dritz Double looked like a nice replacement, but I have a big fit issue - I'm short and my waist is extremely high. The petite Dritz form is almost short enough, but far from robust, so I fixed my eyes on the Uniquely You form. Not only would it take on my dimensions and peculiarities, it would be soft enough to be fitted with my corsets and stays!

I was psyched when it finally came last year. Okay, the form to be covered was pretty big and had ludicrous breasts, but it's foam, it would squish down. My mother fitted the cover to me and everything was looking great. I took the cover home and sat down to put it on the form ...

Oh dear. As many of you know, that foam does not like to squish - it took me ages and ages, moving the zipper a centimeter at a time. The bust was very low and had to be forcibly pushed into place with only moderate success, at my waist the fabric was strained and at the form's waist it was loose, and everywhere there were horizontal wrinkles because each seam was under such stress. I don't have a before picture, so - basically imagine an overstuffed sausage with monster shoulders. (Oh, didn't I mention? Nothing I owned could be put over the shoulders because they were so big. The arm stubs shouldn't stand out straight like that.) There was no question of getting a corset on it, because it was already squished beyond what it could take.
I put up with it for a long time, barely using it or letting it just stand around. At one point, I thought they might have sent me the wrong size body, since I ordered the medium with the largest medium cover and it should theoretically have fit fairly easily. The company wasn't keen on that idea, wouldn't tell me about what base measurements it ought to have for comparison, and wanted me to pay for return shipping plus a restocking fee to exchange it, which I obviously didn't want to do if I wasn't totally sure that it was the wrong size in the first place.

Recently, I decided that the situation needed to be remedied. Julie fixed hers a little while ago, so I knew from her experience that kitchen knives were not the answer. Following my mother's suggestion, I got a boxcutter at the hardware store - you want the kind with a long, thin blade, 18 mm/7 point size - and pushed the blade all the way out. Carefully, I sawed off a thin flake of foam, then another, then another.

(I can't recommend this method enough. The blade does not get dull - I bought a pack of extras and used none of them. However, when doing broad and flat areas like the back it's difficult to get purchase for the blade because there's no room for your knuckles.)

It does take forever. You've got to keep trying the cover back on to see where there's stress, and you still want it to be kind of tight. I did start taking bigger chunks out when I got to the butt, because I knew it was way too low and too big, because of the shortness issue, and it's resulted in a very knobbly texture. It's worth it, though! 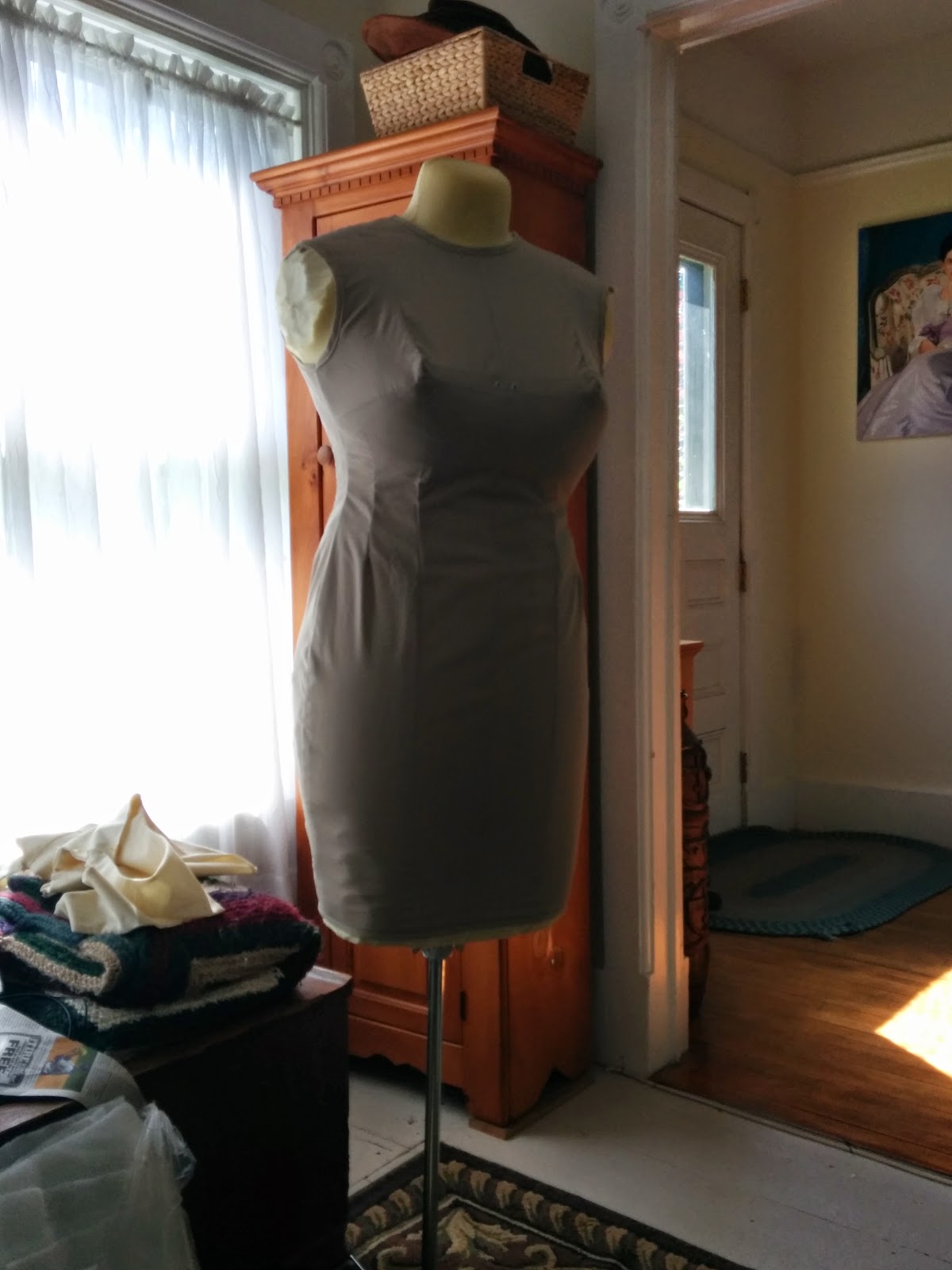 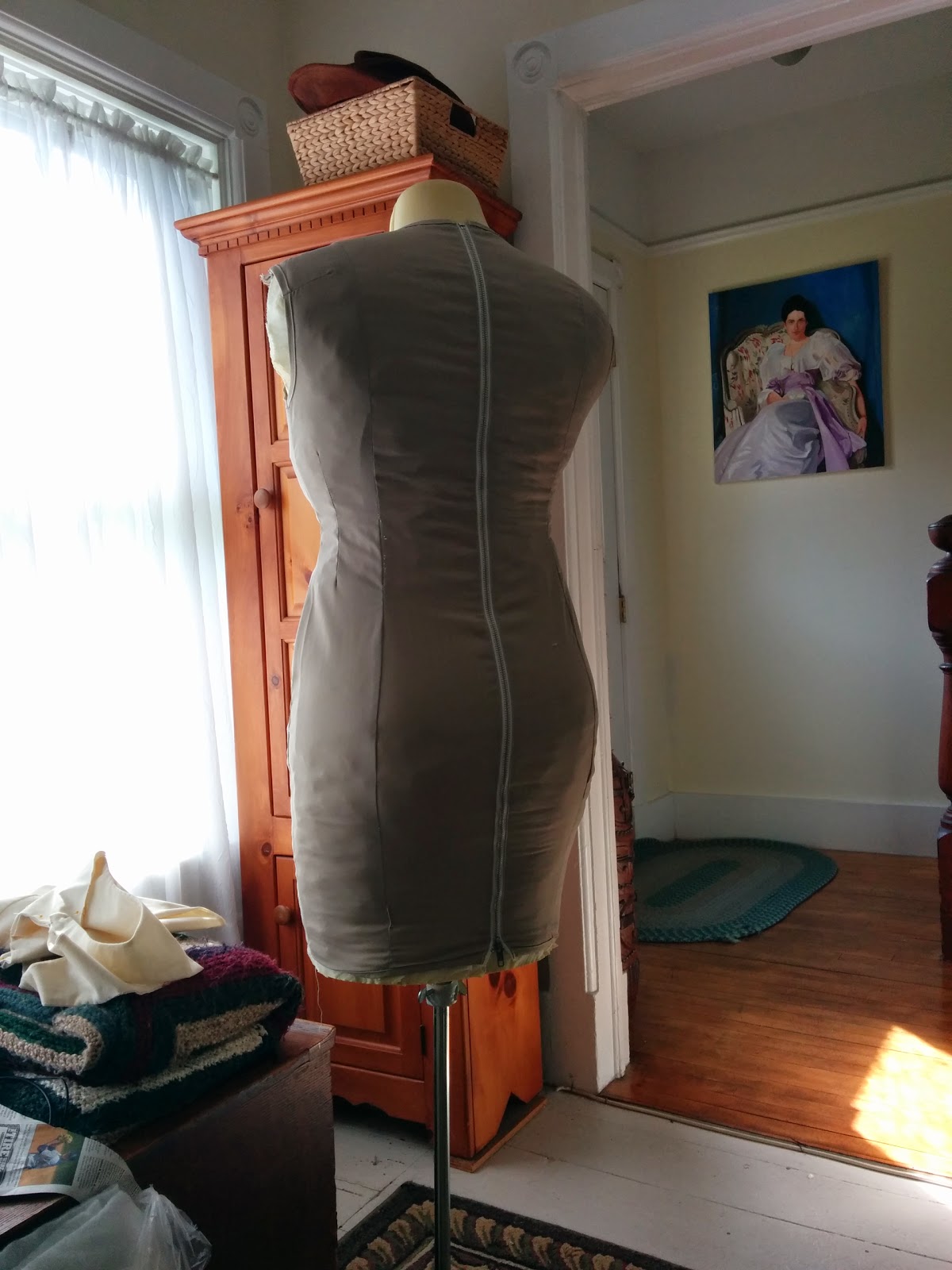 It's not hugely different from the way it was before, but the waist is higher, the bust isn't quite as low, and it doesn't look like it's going to burst out of the cover.

What I really could do is add a little bit of padding through the hips, because the foam body's waist being lower than mine means it's a little thin there ... but I don't tend to make anything ever, really that's fitted in the hips, so I don't know when I'll do it. I don't want to accidentally pad it out too much!
photos