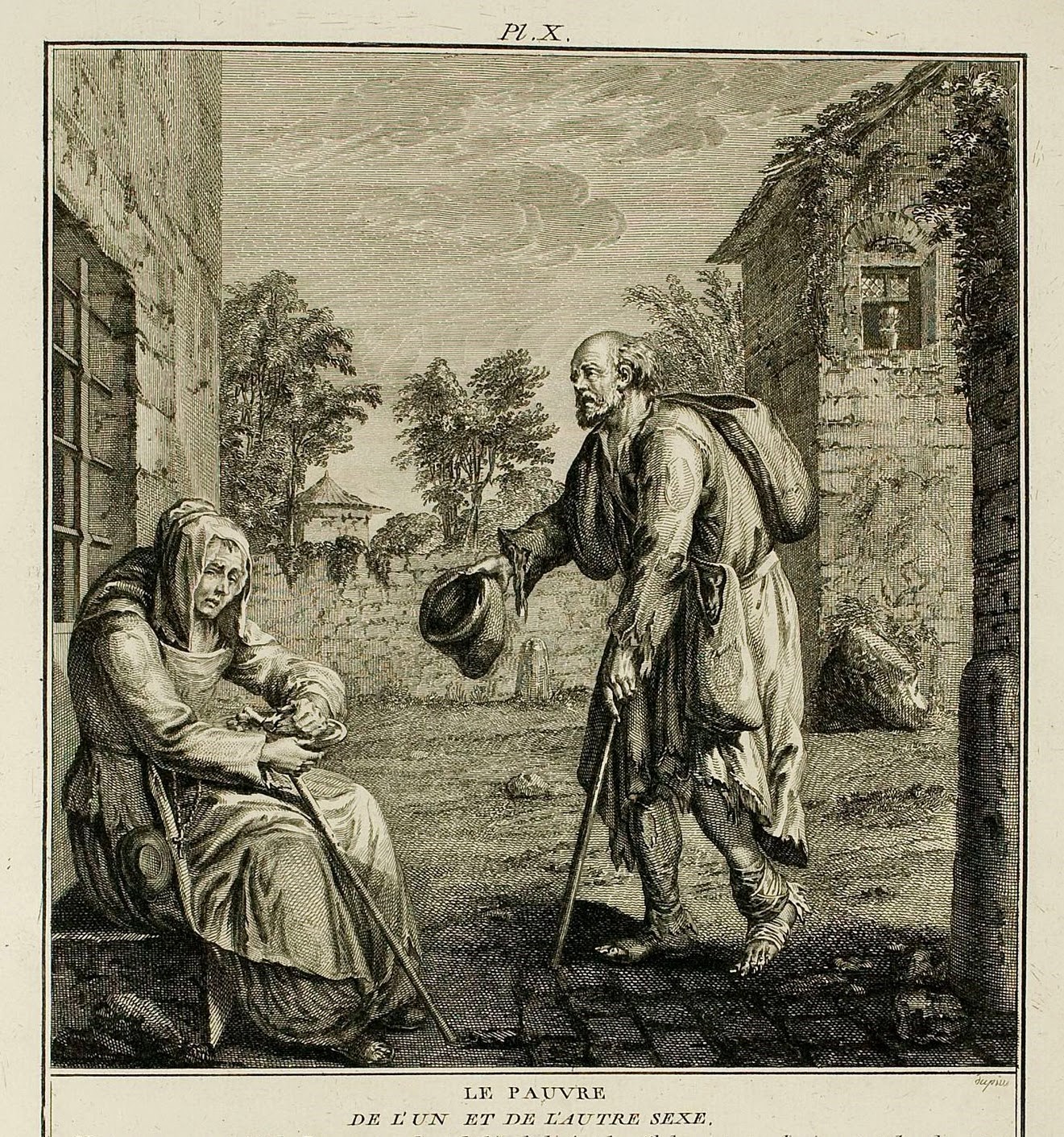 THE POOR
OF ONE AND THE OTHER SEX.

We have represented here the Poor with their torn clothing, such as they ordinarily wear in their state of humiliation. The Spaniard in speaking of poverty said that it is not a vice, but something approaching it. A good mind of this century (de Freny), outbidding this thought, claimed that it ruined things, and in effect poverty obscured the most brilliant virtues, extinguished the most beautiful thoughts, rendered the most beautiful soul contemptible, and in some way stunned those who had not enough strength to endure it patiently. The Pauper is always prey to bodily and mental pain. Can one find a situation more deplorable than beggary? However, among Paupers, how many are found who have the honesty to share, while roguery is more often the characteristic of certain rich men; but of all the estates which are exposed to beggary, it is that of the man of letters and even more that of the botanical Doctor: the great Homer was obliged to recite his Verses in the streets to get bread; the celebrated Plautus was forced to turn a Miller's Grindstone to keep his life. Xilander gave his writings for a little soup. The famous Agrippa was forced to finish his career in a hospital. Miguel de Cervantes, Author of Don Quixote, died of hunger in Seville. Aldovrandi was not left at his death enough to pay for his funeral. J. Ray, this so-renowned botanist, only subsisted on penalty fees that a mercenary hand gave him for his Works: is this not shameful, because of refusing to one who sacrificed his days to assert his rights, which were often accorded to people who did not merit his respects in any other fashion? Why is one more likely to help a poor blind-mute or cripple than a poor scholar? The reason is very simple, said an ancient philosopher: each one believes that he might one day become crippled, mute, or blind; but nobody waits and dies wise. For in a word, all those who have sought to enlighten their time with their works and who have wanted to publish works worth immortality for the scope of its content have always had the misfortune to drag a miserable life, and they have only been rendered justice a very long time after their deaths. Such is, among others, the Author of the religious ceremonies we would have never finished if we wanted to pay for all those who have tried a similar thing.
1770s 18th century