Scaling Up Patterns: A Guide (HSM #6)

June 03, 2015
It was hard for me to figure out what to write for "Out of Your Comfort Zone". My comfort zone is pretty wide, and what's outside of it - the later twentieth century - is also outside of the limits of the Historical Sew Monthly. So I tried to think more broadly about what I'm comfortable with. What makes me uncomfortable? Tutorials, definitely, because I don't do that much when it comes to historical sewing, Another thing that makes me uncomfortable is self-promotion in anything other than short bursts, and this post is essentially shameless begging for you to buy my book - Regency Women's Dress, out this autumn! - even if you normally rely on individual, full-size patterns.

This can also be seen as helping other people move out of their comfort zones. Thinking OUTSIDE the box!
---

When it comes to making historical clothing, I prefer to use patterns taken from extant garments rather than full-size ones graded for different sizes. There are a number of benefits:

It's cool to use whatever method you want to make your garb, but I've seen a lot of people say that they can't scale them up because they don't have a projector or giant copier, and they don't know how to do it by hand. Obviously it's to my benefit if you can not only look at the great pictures in Regency Women's Dress but use the patterns, but I also want to share my genuine enjoyment of messing around with graph paper and maybe open up the possibility of using Janet Arnold, Norah Waugh, Jean Hunisett, or myself (don't forget the patterns I took at the Chapman Historical Museum, which are online for free)

The most sensible way is to fully scale up the pattern as drawn, make a muslin, and fit it as you would fit any other muslin. However, sometimes - usually, when it comes to these patterns based on originals - you already know that it's going to be much too small in certain areas, and I often add in the extra width/height while scaling up. Both methods will be discussed!

The zero step is to make sure you have supplies. Namely:
If you want to adjust in the scaling-up for your own body, you'll definitely need the measuring tape, and possibly a calculator.

It seems like the books most frequently use a scale of 1/8":1", that is, 1/8th of an inch on the page equals one inch in real life, but not all, so check to make sure you know your scale. Corsets & Crinolines in particular seems to use a weird scale: if you're working with that one, you might want to use the printed scale to draw notches on a bit of paper to use as a ruler instead.


The first step once you have all that is to determine your vertical line. Most of the time, this is going to be the center back or the center front - even if these are meant to be on the bias in the final version, because the paper has no relevant grain.

For a side piece, a sleeve, a shoulder strap, etc. you can use any straight line. Depending on the era and sleeve, you may draw the line in the middle of the paper and go from side to side; the other pieces can usually go along one edge of the paper, saving you some drawing and cutting. Just make sure that you're high or low enough on the page not to cut yourself off. 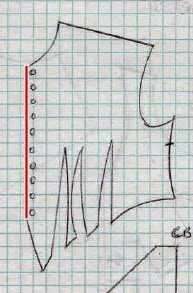 After you have a line, start measuring over to major landmarks at right angles (hence the ruler). I usually start with the top. So with this pattern, it is 3.5" up and 2.5" over from the top of the center front to the corner of the neckline. 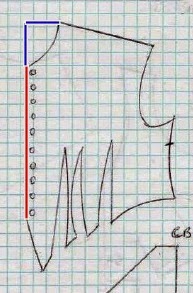 Do this all over the place. Every point can be plotted in relation to another - you don't have to find all of them based on their relationship to the main line, but it can be helpful to go back to it every so often, just to make sure you haven't messed one up. (Shown with the dotted lines.) 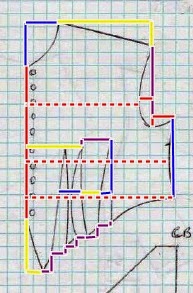 (I kind of overdid it to make the point. You can - should - do the front point of the bodice and the side seam, then a curve for the lower edge between them. You don't really need to do the steps between the darts, because the darts are going to change based on your own figure anyway.)

That looks really intense! But you don't have to draw lines on your pattern with different colored markers. As you do each one, plot it on your newspaper (or whatever paper you're using for this) and draw as you go. For straight lines you can just go from point to point, but with curves you probably want to check the depth on the way.

That will help you make sure they're not too shallow or too deep.

And that's basically it! From this point, you can trace it onto muslin, cut it out, and treat it as you would any other pattern that needed alteration. Mainly, of course, you'll be making them larger. These patterns are pretty much always tiny. Jennie Chancey has a very detailed guide to resizing a real-size pattern, but I'll give you my general rules after I go over the scaling-up-while-altering method.

Scaling Up While Altering

The idea of this is somewhat intimidating. Just bear in mind that you're working with newspaper, which is cheap, and you'll be making a muslin, just like you would to work on any other pattern.

If you've read Cathy Hay's Corsetmaking Revolution, you'll probably find this somewhat familiar - it's based on the same concept. Mark the widest part of the bust and the waist on your pattern, either by sight or by copying it, cutting it out, taping it together, and drawing a line around it.

The next step is to figure out the proportion each piece of that is to the whole.

To go forward, you're going to need your own measurements in the appropriate corset. For me, that's about 19" and 14". You need to find what those percents are on your body.

So when redrawing the back, I need to make sure the upper line is 7.4" and the waist line is 4.5" - apart from that, I'm going to try to keep the proportions about the same.
It's helpful to have a friend or a dress form that's very close to your shape, but however you do it, you need to find the distance between the back of your neck and your bustline, and your bustline and your waist. Draw the straight line between the neck and bust (marking the bust, of course), and then follow the slope of the back dart as many inches as your bust to waist measure. Alternately, you could make your back dart have a different slope, so that its width at the bottom is the same in both patterns. We're talking a pretty small difference either way, though, and if you're a normal-waisted person you probably won't have to deal with that ever, so.

Going back up a bit, what do I mean by "keep the proportions the same"? You can see it illustrated on the back - the shoulder seam ends on the same vertical line as the side seam, so the angle line of the shoulder seam is altered to match it.

This method won't produce a pattern that's absolutely perfect, and even with the addition of your proportions you're going to have to work at fitting the muslin ... but that's something you'd have to do anyway.

Hopefully, this has been a helpful aid in your attempt at scaling up a pattern!