The Art of the Lingère - Chapter VI: The Seaming Stitches in use in Lingerie; Marking Linens; and the Sewing of Lace.

October 25, 2019
Lingères not only sell and cut linens, laces, etc., but as they are charged most often to make garments that are finished and ready to be worn, they send them out for seaming, assembling, mounting, and marking to their Linen Workers. Sometimes the assembling is also done in households of women or by maids who have some knowledge in that respect, or even by thrifty ladies who do it for their amusement: this is why we will explain the seaming stitches used in linen-making as clearly as possible, together with the method of sewing the different marks on the linen that make it known to the laundresses, or any other launderers, to whom they belong.

The different Stitches are:

The overcast stitch, which joins fabrics at the edges.

The whipstitch, which holds fells at the edges.

The backstitch, which joins fabrics flat.

The flat-felled seam joins and holds the edges.

The knotted or buttonhole stitch, which prevents edges from fraying.

The chain stitch, a type of embroidery. 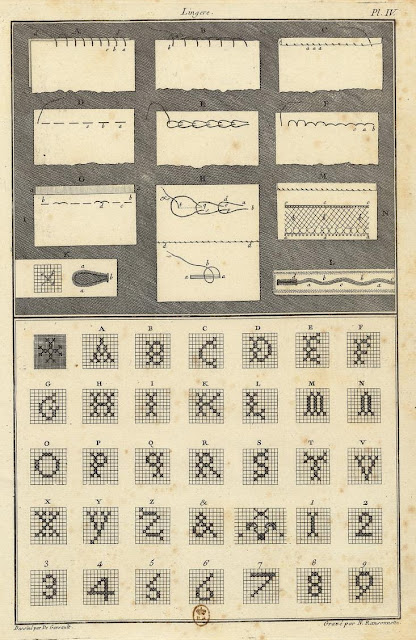 A. Overcasting is a stitch which is used to join two pieces of fabric, lace, etc. See here how it is done.

After having made a knot at the end of the thread to stop in the fabric, as usual, you fold in the edges of each of the two pieces that are to be joined together to prevent the fabric from fraying on top. This is done when the selvages are not used, as it is not necessary to take this precaution when overcasting the selvages.

The folds made, when necessary, the needle is passed through the two edges until the knot is stopped (inside the folds). The thread is released and passed over the folds, re-entering the side which holds the knot, and comes out again on the opposite. The stitches are all made in that manner, all on the same line as each other and little by little, approaching the top edge, as close as can be. As the ends of the folds could fray back, they are usually felled. (See below, the felled seam.)

C. Whipstitching usually serves to sew hems made at the edge of pieces, and also to hold the folded side down in the felled seam below.

To form a hem, one edge is folded up twice on the fabric, and so that this double fold does not come open, it is pleated, or rather gathered, which flattens it to prevent it from opening, which makes it easier to sew.

To sew the hem, the whipstitch is used. After having stopped the thread and taken it out immediately under the hem, the needle is put back in in the front through the three layers, and taken back out a little above the lower edge of the hem, where the maneuver is repeated until the end. [Trans. - This is the "point à rabattre sous le main".]

Figure C: aaa is how the seam looks at the place where the thread is passed under the hem to the next stitch.

F. The backstitch is used for a very solid seam, made thus: after having stopped the knot and pierced the needle between two threads, it re-enters behind the knot, to come out again in front of it the same distance as the first stitch. From there it is pierced again facing backward, on or near the knot, and comes out always in front, at the distance of each previous stitch. All the stitches which appear on the right side with this seam, the first of which are listed b, a, c, are those which were made backwards, which gave it the name "backstitch".

Note. This seam should always be done with the same thread as the fabric; and to make it regular and pleasant to the sight, the same number of threads must be counted in each stitch.

D. The running stitch is simple: you make all of the stitches in front on the same line at equal distances from each other, plunging and bringing up the needle from bottom to top. This stitch is used for gathering and basting: that is why it is called the light seam.

Figure D: a b c are running stitches seen from the outside.

GMH. The felled seam is made with several stitches. It is made with an overcast stitch, also running stitches mixed with back-stitches, the whole used to join two pieces of fabric when neither edge has a selvage, when there is only a selvage on one of the pieces, as two selvages are joined one to the other without needing felling, which is only used to prevent the fabric from fraying: see the maneuver here. Fold the edge of each fabric again, but one more than the other: fold them and bring the folded edges together, such that the fold of one exceeds the other by several twelfths of an inch. Overcast them near the crease of each fold, then turn the pieces over and unfold the fabrics, and you will find each end curling. Turn down the longer over the other, folding them flat on the fabric, and hold them there with a whipstitch. Otherwise, put the edges of each folded piece near each other, as before, but so that edge a exceeds edge bb (in Figure G) by a few twelfths of an inch. Then along lower edge bb, make seam d with backstitch and running stitch: for example, two running stitches and two backstitches. Turn down the upper edge aa (Figure G) over the other piece below the seam, and hold it with whipstitch (Figure M).

Figures G and M show a felled seam with mixed front and backstitches in place of overcasting.

Figure H shows the two pieces open on the underside. The seam hardly shows at dd, for if it is well-executed, the seam should be hardly seen from the front.

B. Knotted or buttonhole stitch is what is made around a whole buttonhole, for fear the edges will fray. It also serves for other occasions which will be explained in their time. It is a type of overcasting in which, before each stitch is tightened, the thread is passed through the ring which forms naturally when making these stitches.

The buttonhole being surrounded with this type of stitches, you make a bar intended to prevent it from getting wider to one or the other end. This bar begins with three or four long stitches, called glided stitches, across the end of the buttonhole, and little by little from one side to the other, they are strengthened by being taken together with the same knotted stitch as before, without piercing the fabric.

E. Chain stitch. This stitch is rarely practiced by Lingères: it is regarded in linen-making as an embroidery stitch, since it is used most often in that art. However, as it can be used here, though rarely, the description will be given for the purpose of thoroughness.

After having stopped the thread in the fabric, lay down a length of the thread, which you will hold with the tip of the thumb of the other hand: this will be the length of the little stitches of this seam. Then pass the thread behind and under, near the knot, and bring it out again near the tip of the thumb, that is to say, at about the length of the first thread, as determined by the thumb. Then put it back in to the side or a little behind this exit, and make it appear in front at the same length as the first. Pierce the fabric again with the needle, and continue.

The letters or numbers which are sewn on linens and which are called marks, as previously explained, are made with only one type of stitch, called cross stitch. The only rule for making this stitch regular is to count threads, for, as the fabric is made of threads which cross at right angles, two threads must be counted in one direction and then in the other for each stitch, that is to say, two threads from right to left, and two from top to bottom. So after having stopped the knot the needle is moved, crossing diagonally the four threads from top to bottom; it comes back under the two threads from bottom to top, and the second diagonal crosses over the first, forming a St. Andrew's cross, called the cross stitch. The example, Figure K, has the knot under a, going from a to d; then passing underneath from d to b, going over from b to c, etc.

The figures which are in the lower part of Plate 4 show all the different ways marking stitches can be disposed to form the letters and numbers which they express.

Note. In the squares which represent the fabric in the plate, only the threads which are used to make the crosses are shown, in order to avoid confusion and to better distinguish each mark. Each little square is two threads in each direction.

Sewing laces, whether to each other or to entoilages or fabrics, is usually done with overcasting, but it is necessary to know where one puts the needle in the lace.

All laces, bobbin and needle, are bordered by two types of selvages. The one which is used to assemble them is called the foot of the lace; the other is called the head, and is edged with a row of little loops called picots. Lace is never sewn on the head. The foot of the lace, opposite to the head, has a simple little selvage, under which are arranged little picots or loops; under the loops, from the side of the body of the lace, is another little selvage that is thicker than the first. These three parts compose what is called the foot. When you want to join two laces, such as to widen the lappets for a coiffure, the two feet are put together, the stitch passing from one foot to the other. You must take care in this case, as in all of the others, to make the needle enter through the little loops between the two little selvages.

Figure M represents a piece of lace: ccc, the foot of the lace; bbb, the lace; aaa, the head and the picot.
18th century Garsault