January 18, 2020
Several years ago, mid-sixteenth-century Venetian gowns were fairly popular among historical costumers, but I don't seem to see them anymore. (Or maybe I'm just not looking in the right places?) Anyway, I was always interested in them but never made one myself. Recently, I was thinking about this era of clothing again due to a personal fiction project, and I realized that while I was familiar with the standard outfit - a sleeveless or sleeved kirtle that laces up the front, revealing a white triangle or strip of gathered chemise - I didn't really know anything about its evolution. 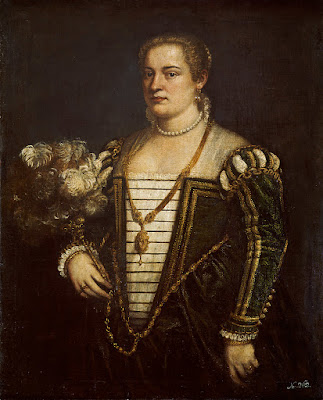 (One interesting thing its evolution shows is that the common statement that fashion only "changed" every few decades until the nineteenth century is, like many common statements about fashion history, not true. Fashions had continuing variety, though often in subtle ways.)

At the beginning of the sixteenth century, Venetian dress was somewhat plainer.

Early-sixteenth-century Venetian women went for a general impression of mass, with voluminous and sometimes flowing sleeves, plain bodices with wide necklines, and full skirts pleated to the waist. The bodices typically seem to be stiffened to some extent, not boned but perhaps with a canvas interlining, given the way they flatten the bust; at the same time, the one above has a certain amount of wrinkling above the waist that indicates that it's not interlined. Maybe an undergarment was used?

The earliest open-fronted gown I've seen in a portrait does come from this period:

It's a little odd, and possibly meant to be allegorical image rather than a real portrait - the opening seems like a keyhole cutout, which would have been seriously wasteful in the period, but then, we can't see the bottom of the bodice very well. It's laced only at the neckline, but does still seem to be somewhat supportive.

By the 1520s, putting more of the camicia on view seems to have become fairly normal. Some gowns featured deep necklines, while others were made so that the bodice opened in front with the edges not meeting.

Many of these in this period used ties rather than lacing, which is interesting. The sleeves were still quite full, but were more likely to be arm-shaped than they had been earlier, and by the end of the decade were often made with a fuller puff at the top; in the early 1530s, the bottom part of the sleeve generally fit closer to the arm.

While there are portraits showing the standard closed bodice into the 1540s, in general the front-lacing bodice that showed a slice of the chemise, generally a thin one, seems to have become the norm by that point. The sleeves were coming to fit the arms better as well, the upper arm puff shrinking into a small decoration. By the 1550s, a slight point to the bodice became the norm.

The above portrait is the latest one I'm aware of that shows ties rather than straight cords, but it's interesting in contrast with both the tied and laced ones above: the waist of the gown is lower, and while there's a bit of wrinkling in the bodice, the front edges don't show the same kind of pulling - the interlining and possibly boning is sturdier. The skirt is also more tightly pleated or possibly gauged to the bodice, and the bodice opening continues slightly into the skirt.

It seems likely that the mother in the above portrait has the opening of her bodice continuing into the skirt as well, but it's covered by what I'm assuming is an apron on a very thin tie - or is the skirt open all the way to the hem? If so, what looks like a camicia would have to be a full underdress. This is about the point in time where I start to get very curious about what I'm actually seeing.

By the 1560s, the point was much more pronounced. Skirts were more frequently cut to be open in front as well, just like the fashion in England and France at the same time, and the puffs at the shoulders became more frequently slashed/paned (as in the following two portraits).

The paned upper sleeves became bigger in the 1570s and then smaller again afterward, skirts were less frequently made open in the front, and the starched standing ruffs popular elsewhere in Europe were also worn in Venice. While more women appear to have worn bodices that were closed across the front by the 1580s as they came more into line with northern and western fashions, the open bodice appears to have been worn to some extent through the end of the century. In some cases, the "peascod belly" shape we so know from the end of the Elizabethan era was involved, even with the open bodice.


The main thing that stands out to me after about 1540 is the flatness of the front of the torso. Most of the Venetian women in these portraits are substantial: if this is a gown worn open over nothing but a chemise, as it seems to be in the earlier decades I would expect to see the profile to be bowed out at the bust and stomach (as you see in many recreations) and for the chemise to have collapsed on the body behind the lacing or scrunched up. That neither of these things happened suggests that there was a stiffened stomacher behind the lacing, either under the camicia or in front of and mimicking it. (The latter was once suggested by Angela Bacci, aka StarlightMasque, although I unfortunately can't find where she posted about it.) These portraits are so realistically painted everywhere else that it seems unlikely the front of the bodices would be "cartoonified" - this must be how they looked at the time.

I can tell there was once a lot of debate about the potential for stays having been worn, but I can't find very much of that still online! It definitely seems possible to me, given that the Florentine Eleonora of Toledo's 1562 funeral outfit included a velvet underbodice (although Janet Arnold noted the possibility that it once had a skirt attached), but I believe the stays worn by Dorothea Sabina von Neuberg at her burial in 1598 are the earliest extant or visual example we have of a skirtless underbodice with strong boning, so I would think a supportive underdress/sottana is more likely for most of the period, if there was an actual separate garment rather than the bodice being stiffened and worn with a stomacher.

The other confusing thing is the way the skirt attached to the bodice in front when there was such a wide opening to the bodice - while the portraits showing a thin opening also show the skirts ending at the bodice edges and being open an inch or two below the waist, the skirts must come past the edges on these wider openings ... but what do they attach to? If there is a stomacher, perhaps the bottom of it hides some kind of waistband.

A very few portraits do show what is clearly something else behind the bodice's opening, either a stomacher or an underdress:

This helps to lend credence to the idea that the others are showing something other than the chemise, but it's not definite.

One last theory from me. The horizontal cords are generally interpreted as ladder lacing, but we then come again to the realism issue: ladder lacing almost always has some amount of angling as the cord pulls the eyelets or lacing rings, and by the 1540s the portraits show perfectly straight lines. Could this actually still be short cords tied to either side? Or, even more radically, a non-functional opening, with the real bodice openings being lacing at the side back seams (as on Eleonora's burial gown)? The relatively few side/back views we have don't seem to show it, but it's a possibility. Something to chew on!