May 21, 2011
The shift was easy, apart from all of the flat-felling, but the stays are proving less so.  There don't seem to be any patterns of extant examples in the style I'm looking for - as I pointed out in my post on corsets of the period, most surviving pieces are either conical (early 1790s) or long and slender (late 1800s), but during the period there was a lot of emphasis on the natural roundness of the body* and I want to make a short corset with cups.

To start off, I used Jill Salen's brown jean 1790s stays pattern, which I made at 1/4 scale in paper and taped together to get an idea of the shape and length. I shortened it and made little tabs, then traced the pieces back on graph paper. When I mocked it up in a layer of muslin, it turned out that the pattern was still too long and too drastically shaped. I slashed and spread each piece, then ended up taking the side pieces back in a little.

Since the stays are so light and don't need to actually move my flesh into a shape (beyond the bust support, I mean), I'm not using that much or that heavy fabric. The top layer is a light but strong white cotton (I think the label said "German chintz"?), and the interlining is a warp-faced linen/cotton blend. I plan to line the stays with the same linen I used in the shift. The boning will be basket reed, possibly doubled.

My sewing methods are coming from Costume Close-up - backstitched channels, butted seams. I did several of the channels on one side, including the ones at the lacing edges, then stitched the pieces together. 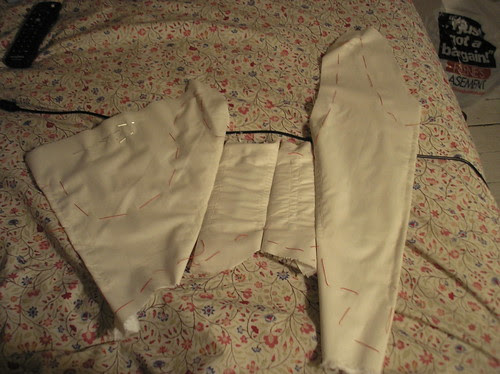 It's a little difficult to tell without the cup space cut out, but I think it's too big (and too long). I'm waiting to do anything else until I get home and can get Mom's expert spatial-awareness opinion. 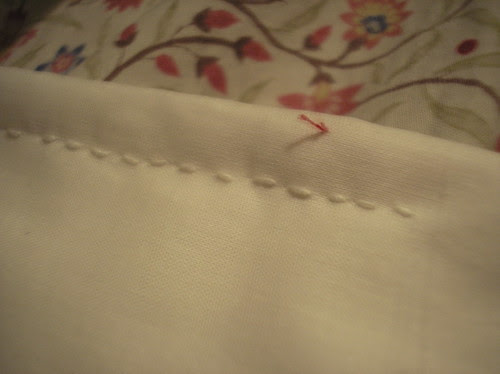 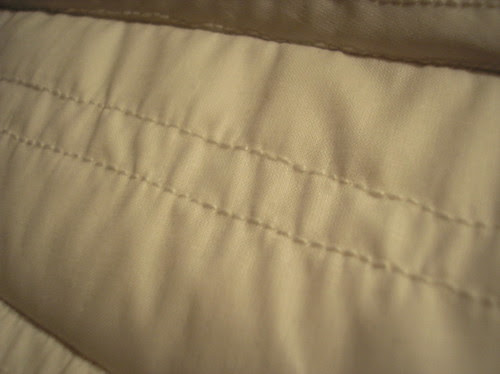 One of the channels.

* to an extent I think the 1920s are like that as well - true, the fashion plates show women who are as thin as rails, but movies and photographs show women who don't seem to care that they're not perfectly thin or that their clothes aren't flattering because omg no corset!
18th century corsetry neoclassical thesis project