June 05, 2011
The last dozen or so posts have been fairly well organized, but I don't think this one will be. 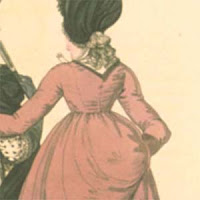 January 1798, fig. 166, morning dress.  I'm interested in the back construction there - the shape of the pieces, and the roundness of the waist. 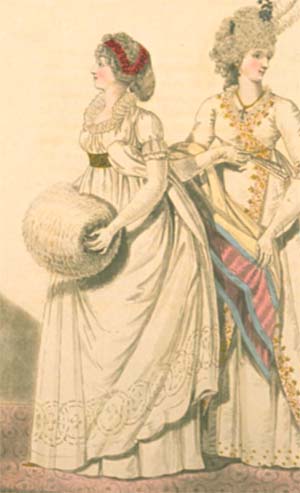 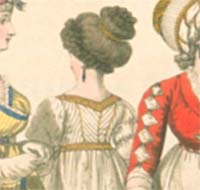 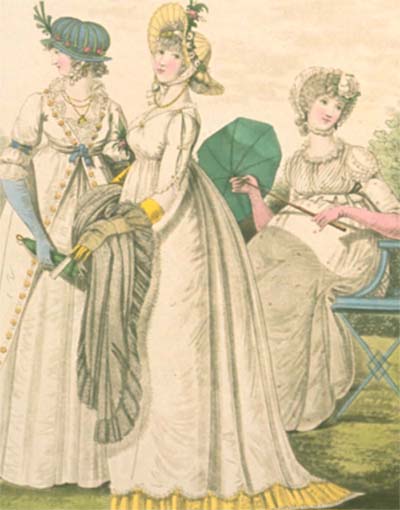 June 1798, figs. 181-183, afternoon dresses.
181: "... melon-ribbed hat of lilac and green silk, with a very large crown, trimmed round with a wreath and a bouquet in the front ... Petticoat of white muslin; robe of the same, short full sleeves, trimmed with lace, and tied in the middle with an embroidered lilac riband; the whole bordered with an embroidery of flowers, and tied in the front with lilac riband."
182: "Round gown of cambric, flounced with yellow crape in small Vandyke scallops, and headed with lace; short open sleeves, looped in three different parts with gold buttons: jacket skirts of lace, and trimming of lace round the neck and sleeves."
183: "Caul of muslin, trimmed with a frill passing under the chin; a large artificial rose in the front.  Round gown of muslin, embroidered in purple and in dice pattern, short close sleeves; Spencer, with epaulettes and laps in side-plaitings trimmed with lace." 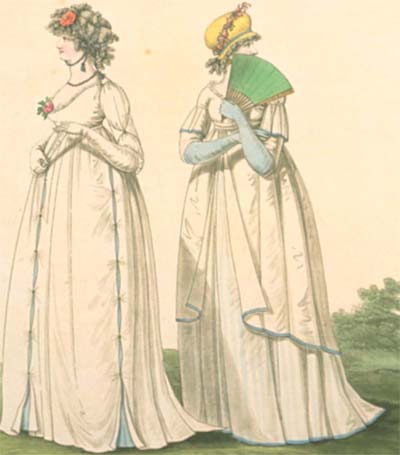 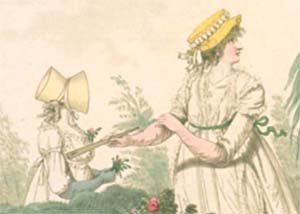 August 1798, figs. 188 and 189, morning dresses.
188: "Round gown of cambric muslin; short full sleeves, tied in the middle of the arm with riband.  White muslin spencer, trimming of the same in small scollops."
189: "Round gown of cambric muslin, the train in Vandyke scollops; short close sleeves.  White muslin cloak trimmed with lace, and tied to the waist with a green riband."