June 13, 2011
SUCH PAIN.  On my mother's advice, I made a one-layer mockup of one side of the stays to mess around with, and while it was very useful I now want to punch myself in the face.  I think they're roughly the right size around at this point, and if they're a bit too big it seems slight enough that redoing the channels on the lacing edge should be enough to take care if it.  (Or I could sew the back pieces together and take it in there.) 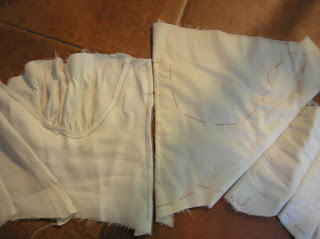 Both of them together - the machine-sewn mockup is on the left, and the real one is on the right.  I basted the seamlines because my stupid stupid washable marker disappeared.  I think I might keep the cup shape of the mockup, or I might go for something in between.  It's very difficult.  I don't think I've seen anyone make transitional, cupped stays that had a lot of bosom to deal with, so I have basically nothing to go off beyond the picture in Underwear Fashion in Detail.  ETA: And as soon as I say that, I find an example. 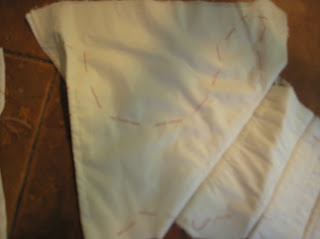 Closeup of the originally-drawn cup. 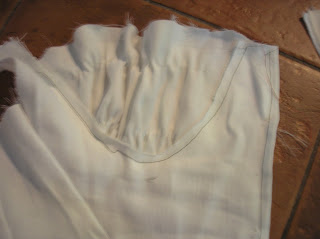 And a closeup of the mockup.  I did the gathering very sloppily - just two rows of largeish stitches.
18th century thesis project