June 06, 2011
No pictures this time, just rambling.  So I downloaded the entire run of Gallery of Fashion from the Bunka Gakuen online library (it took about three hours) and have been looking at the plates in a general way, trying to put together a bit of a timeline with regard to waistlines and hem flounces and such.  One thing I'm noticing is that descriptions of the clothes tend to say:
as different types of dresses, I mean.  So I'm trying to figure out the difference between "round gown" and "chemise".  At the moment, I think it could be that a chemise is pulled over the head and a round gown fastens?  I need to go back through and look at the plates again, but that seems plausible.

Anyway, what I'm really thinking about is petticoats.  How do you do petticoats for the 1790s?  Bodiced or at least strapped petticoats make sense for the Regency, when the silhouette was slimmer and you only needed one, but the 1790s silhouette is so solid.  I've read one suggestion that makes sense and fits with an idea I had earlier - that you use one petticoat at the high waist to create a smooth line over several(?) more at the natural waist.  But I don't see how you can tie a petticoat under the bust and have it stay there.

This lot at Christie's has a description that says that the petticoat has hooks to match eyes on the jacket - so I guess it may have been common/possible for petticoats to stay up that way - petticoats worn with spencers or "corsets" (basically a bodice with sleeves that match the petticoat, as far as I can tell) or under (open) robes, that is. 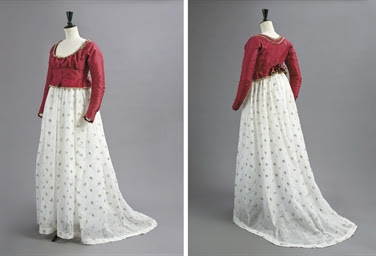 This one from the MFA doesn't explain how it works.