July 29, 2011
In September 2009, I finally let myself order the stays kit from Silly Sisters in blue linen.  It took me months and months - it's hard to commit to sewing miles of boning channels when you have papers to write - but I think around the September of 2010 I had them basically finished (minus the lining and maybe a row or two of horizontal boning across the sides).  I used the 1730s-1740s pattern in Corsets & Crinolines, as I really like that period and plan to make a gown from it for my own nefarious purposes, and the instruction from Cherry Dawson's stays workshop (now offline). 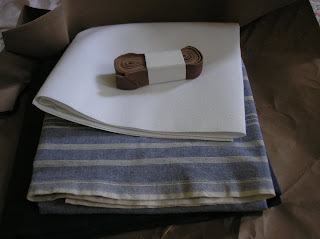 The bundle, as it came from Silly Sisters.  Dark indigo linen, blue and white striped linen for the lining, white linen canvas, and leather strips for the binding. 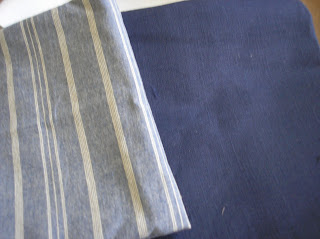 The lining and outer fabric in a better light. 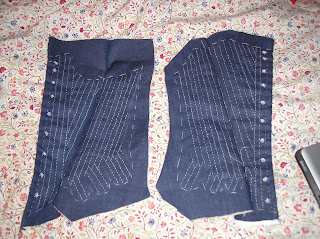 And a great big skip forward.  The channels stitched in half-backstitch - I'd started with regular backstitch, but the stitches were too meandering and it looked dreadful.  I made them slightly too big by accident: 3/8" per channel, but at some point I started sewing on the inside of the chalked line (more like 2.5/8") and the bones fit much better. 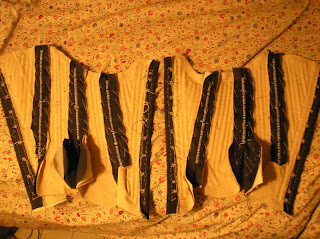 Very yellow picture of the inside of the stays, before I cut out the tabs.  The one thing I don't like about this pattern is the way the front tabs point back and the back ones point front - it makes them overlap at the side and it's just difficult to deal with and looks bad.  Next time I make stays, the tabs are going to slant less. 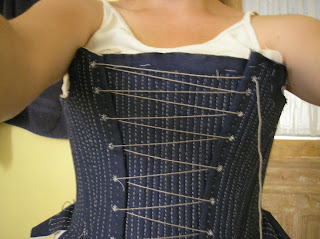 Pre-binding, just to make sure that everything fits.  Probably I could have made the stays a little smaller - when I enlarged the pattern, I left it the same height but widened it a bit. 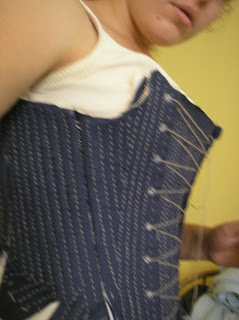 A (blurry) 3/4 view to show that awesome silhouette it gives me. 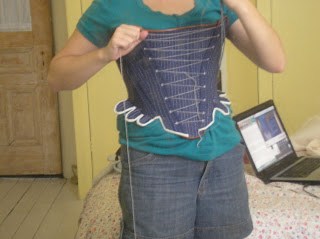 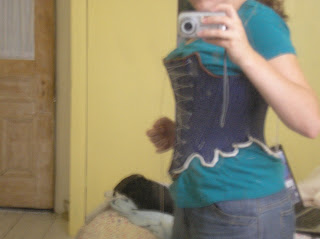 Post-binding (again blurry).  It turned out that one packet of leather binding was not enough to fully bind the stays - take note!  But I had bought an enormous roll of unbleached cotton twill tape for just-in-case, since there are so many things you can do with it in costuming and in museum work, and I used that for the tabs, which was probably less frustrating than doing it in leather would have been.  I kind of like the color contrast, too.  You can see that I'm pulling the lace (a length of sock yarn) tight: I hadn't mastered tying it off without losing tension at that point, so I just held it.  I need to get a lucet or some ribbon or something, because that yarn keeps wearing and snapping. 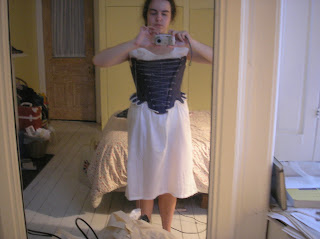 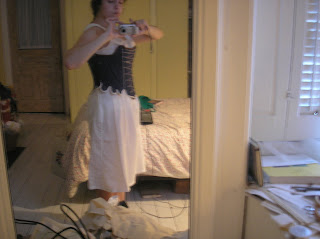 Over an inaccurate shift, just to show it against the white.  Still not getting the whole tension thing, you can see that the stays aren't laced as tightly as they were in earlier pictures.  Some of that was also that I wasn't pleased at the amount of flattening I was getting on my bust, which is what's prompting me to think about putting in the horizontal boning indicated on the pattern that I'd ignored - that would make the stays stand out more at the top, right?
18th century corsetry