The Interesting Transition of the 1830s

The extraordinary changes in fashion during the 1830s are a reminder not to over-indulge in "decade-ism" - there is no one style emblematic of the 1830s as a whole: it is important to use "early", "mid", and "late" (or beginning and end dates) when dating extant garments and portraits.

The fashions of the beginning of the 1830s were an exaggerated version of what had come before.  The puffed sleeves were enormous, full skirts flared out at the hem, and waists were cinched in at their natural level. 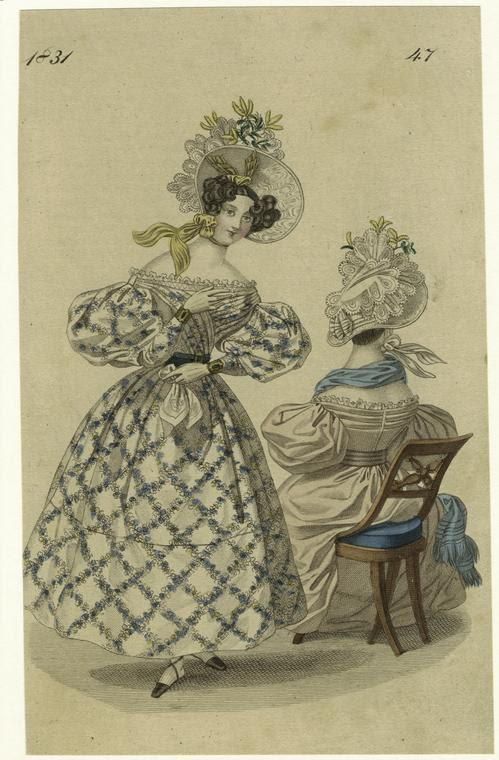 Feet and ankles were displayed, appearing more dainty under the very full skirts, which were held out by numerous petticoats rather than the padded hems fashionable earlier.  The puffed sleeves were placed on the arm, accentuating the slope of the shoulders above them and creating  a contrast between their width and the waist.  The hourglass figure was a great change from the earlier high-waisted shape that had predominated in fashion since the late 1790s, and contemporary cartoonists loved to lampoon it (just as they always did corsetry and other shape-changing devices). 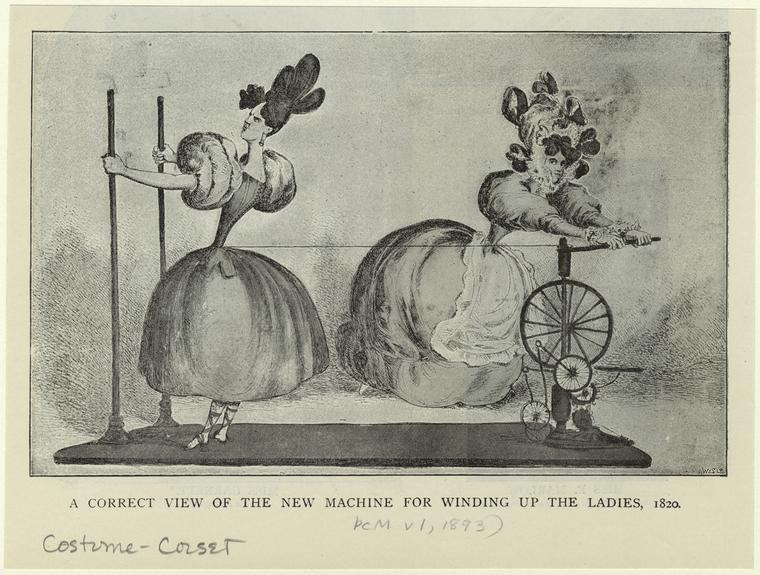 As the decade progressed, the top of the sleeve became wider.  The width was often emphasized with petal-like short oversleeves or pelerine capes.  At the same time, it became less important for the hem of the skirt to stand out, and many fashion prints show skirts that fall in folds all the way down.  The waist was on its way down, and occasionally becoming more pointed in the front. 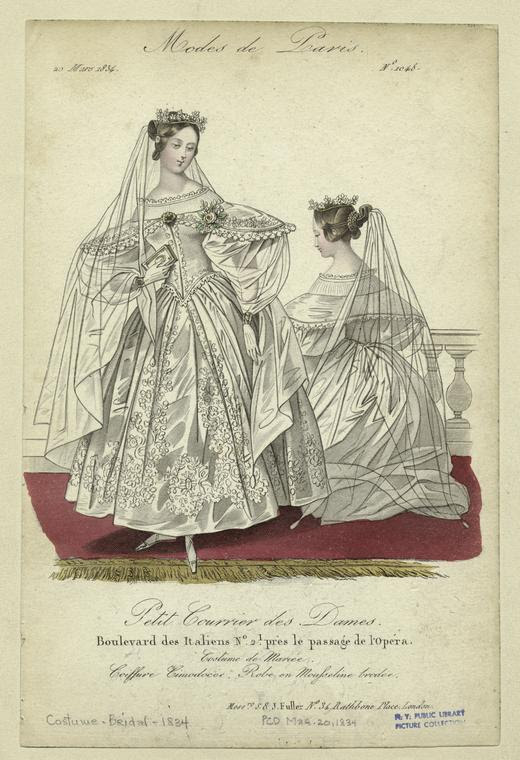 (It is interesting to note that these wedding gowns are white - general fashion history knowledge says that Queen Victoria started that tradition, but clearly white gowns intended just for one event predate her own marriage.) 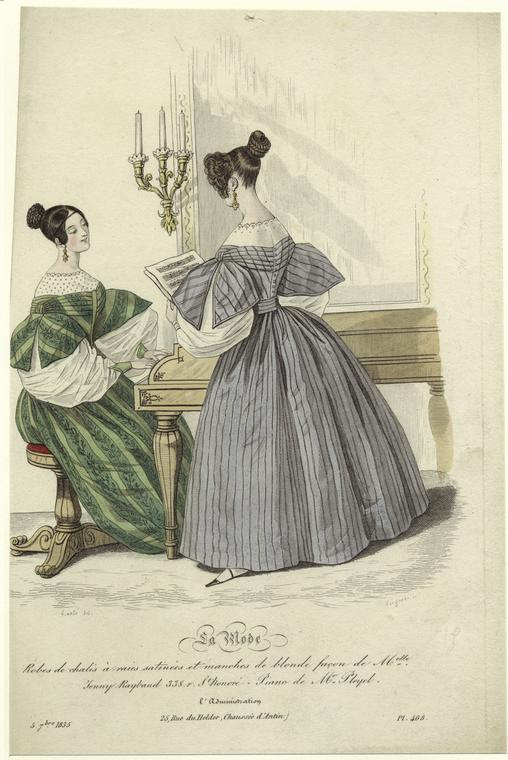 By the middle of the decade, skirts had lengthened to the floor and were achieving a distinct bell shape.  The enlargement of the sleeves stopped, and the first of the changes to happen to them was that they began to fall and lose their volume.  At the same time, hairstyles were losing the thick bunches of curls from the front, and the high chignon moved down the back of the head. 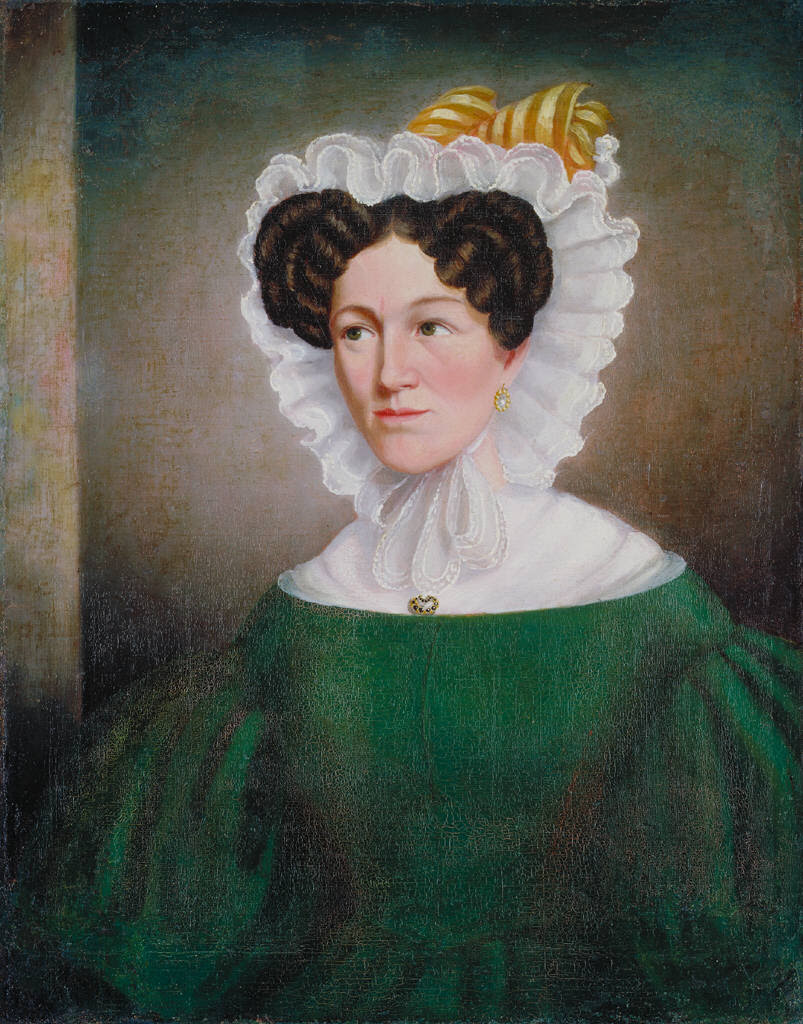 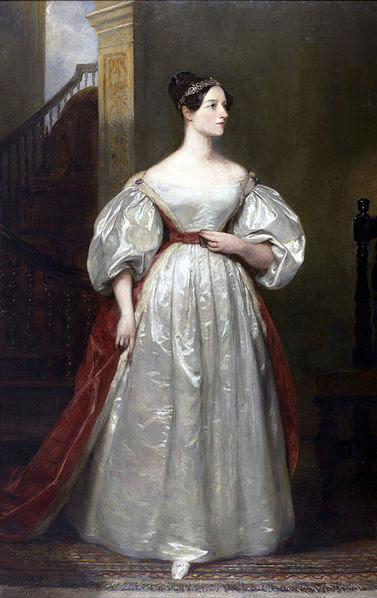 After this, sleeves of many different styles were worn contemporaneously.  Generally, these can be divided into being either puffed (around the elbow, on the forearm) or flounced (at the elbow, from the shoulder, etc.), or both. 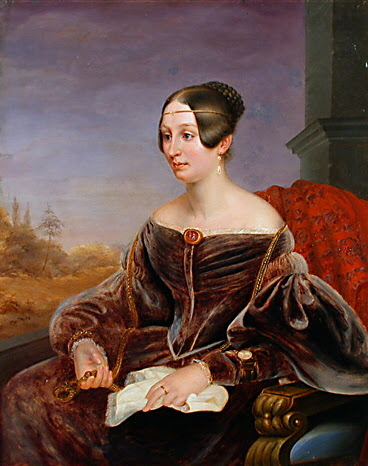 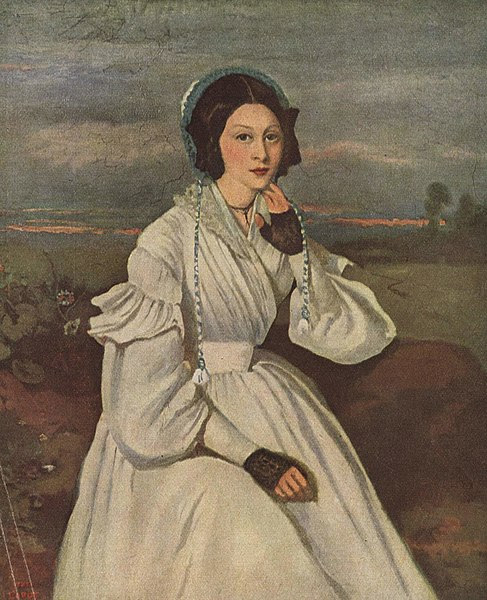 This variety of sleeve styles persisted through the end of the decade.  The main change in fashion between 1836 and 1840 was the increase in pointed waists.