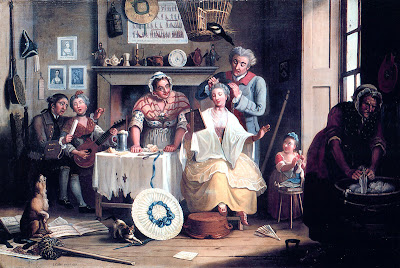 I was looking through What Clothes Reveal when I came across this picture again, and my attention was drawn to the three prints on the wall in the upper left-hand corner.  The lower two are of the Empress of Russia and Moll Flanders, very recognizable figures, but the upper one is labeled "Eliz. Canning".  When I first saw the picture some time ago, I didn't think anything of it - I assumed that Elizabeth Canning was another fictional character, like Moll, and passed by. However, this time the name struck a chord, and I remembered that I had come across it in my post on stuff gowns. 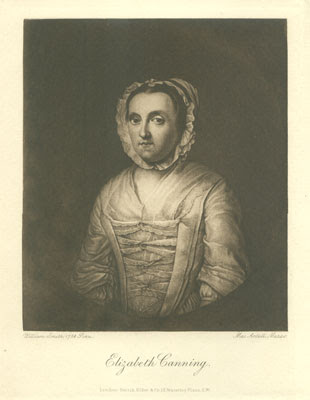 Elizabeth Canning was eighteen at the time of the mystery, working as a maidservant for a publican who lived near her poor but respectable family in Aldermanbury, London.  On New Year's Day in 1753, she visited with her aunt and uncle until nine in the evening, when she left them to go back to her lodgings.  Unfortunately, she did not arrive there, and the next day her family and friends began searching for her.  Advertisements were placed in the newspaper asking for any information.


Elizabeth Cannon went from her friends, between nine and ten of Monday night between Houndsditch and Bishopgate; she is fresh-coloured, pitted with the small-pox, high forehead, light eye-brows, about five feet high, eighteen years of age, well set; had on a masquerade purple stuff gown, black stuff petticoat, white chip hat bound round with green, white apron and handkerchief, blue stockings, leather shoes.  Any person that can give any account where she is, shall have two guineas reward, to be paid by Mrs. Cannon in Aldermanbury-Postern, a sawyer, which will be great satisfaction to her mother.

Note, It is supposed she was forcibly taken away by some evil disposed person as she was heard to shriek out in a hackney-coach in Bishopgate-Street.  If the coachman remembers any thing of the affair, by giving an account as above he shall be handsomely rewarded for his trouble.


Left by her uncle and aunt in Houndsditch, about half-an-hour after nine in the evening, on Monday the first of January, a young woman upwards of eighteen years of age, pitted with the small-pox, high forehead, fresh-coloured, light eyes and eyebrows, dark hair, about five feet high; had on a masquerade purple stuff gown, black quilted coat and green under-coat, blue stockings with red clocks, black leather shoes and clogs, white shaving-hat edged with green ribbon, white handkerchief and apron: the above young woman is supposed to be forcibly (by the screams and shrieks) taken into a coach by some ill-designed persons, the same young woman not being since heard of.  Any coachman, or persons, that can give intelligence to Mrs. Cannon, sawyer in Aldermanbury-Postern, near Fore-Street, shall have six guineas reward, to be paid by Mrs. Cannon. --- [THIS IS THE LAST TIME OF ADVERTISING.  HAD IN HER POCKETS TWELVE SHILLINGS AND NINE-PENCE HALF-PENNY - written on the draft but not printed] 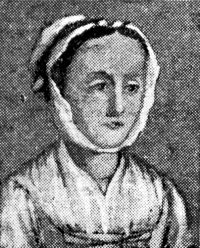 Elizabeth returned in the evening on January 29, dirty, extremely weak, bleeding from an ear, and dressed in a bedgown and petticoat.  She told her story to Henry Fielding, who was Chief Magistrate of London at the time.

... her Uncle and Aunt, it being late, walked a great Part of the Way home with her; that soon after she parted with them, and came opposite to the Bethlehem-Gate in Moorfields, she was seized by two Men who, after robbing her of half a Guinea in Gold, and three Shillings in Silver, of her Hat, Gown, and Apron, violently dragged her into a Gravel-walk that leads down to the Gate of Bethlehem Hospital, about the Middle of which one of the Men, after threatening to do for her, gave her a violent Blow with his Fist on the right Temple, that threw her into a Fit, and intirely [sic] deprived her of her Senses.  These Fits she says she hath been accustomed to; that they were first occasioned by the Fall of the Cieling [sic] on her Head; that they are apt to return upon her whenever she is frightened, and that the sometimes continue for six or seven Hours; that when she came to herself she perceived that two Men were hurrying her along in a large Road-way, and that in a little time after she was recovered, she was able to walk along; however, they still continued to pull and drag her along; that she was so intimidated by their Usage that she durst not call out, nor even speak to them; that in about half an Hour after the Recovery of her Senses they carried her into an [sic] House where she saw in the Kitchen an old Gipsy Woman and two young Women; that  the old Gipsy Woman took hold of her by the Hand, and promised to give her fine Cloaths [sic] if she would go their Way, which Expression she understanding to mean the becoming a Prostitute, she utterly refused to comply with; upon which the old Gipsy Woman took a Knife out of a Drawer and cut the Stays off this Elizabeth Canning, and took them away from her, at which time one of the Men likewise took off her Cap, and then both the Men went away; that soon after they were gone, and about an Hour after she had been in the House the old Gipsy Woman forced her up an old pair of Stairs, and pushed her into a Back-room like a Hay-loft, without any Furniture whatsoever in the same, and there locked her up, threatening that if she made the least Noise or Disturbance, the old Gipsy Woman would come up and cut her Throat, and then fastened the Door on the Outside and went away.

She reported that she had been given only bread and water, and had eventually been able to get out a boarded-up window and walk home.  Later, she said that she'd heard the name Wells, and Susannah Wells, landlady of a house in Enfield Wash, was identified as the woman behind the kidnapping, and Alderman Thomas Chitty was approached to arrest her.  When the party arrived at her house, they found that the attic looked nothing like Elizabeth's description and there was no evidence of someone breaking out of it - however, Elizabeth identified the room and women living in the house (Mary Squires and Virtue Hall) and they were taken into custody.  Mary Squires was arrested for removing Elizabeth's stays (the theft of Elizabeth's stays, worth ten shillings, was the biggest crime under the laws at the time - it would result in a capital sentence), and Susannah Wells for running a bawdy house.

Fielding was impressed with Elizabeth, and took her side, as did nearly everyone - the story was exactly the sort to inflame sympathies, with injured innocence on one side and the easy targets of old women and Gypsies on the other.  He questioned Virtue Hall repeatedly, and when he threatened her with imprisonment she confessed that Mary Squires's son and another man had assaulted Elizabeth and taken her to Susannah Wells's house.  Mary Squires and Susannah Wells were tried on February 21; Virtue repeated the testimony she'd given to Fielding, and many character witnesses for the defendants were kept out by the mob in the street.  They were found guilty.  Susannah Wells was to be branded, and Mary Squires was to be hanged.  Elizabeth was feted by the gentry, and enough money was donated to her cause that she was able to get better lodgings.

However, the judge, Sir Crisp Gascoyne, was not convinced.  He conducted his own investigation and noticed that Mrs. Canning had reported items in her advertisements she couldn't have known until Elizabeth returned and which Elizabeth couldn't have known if she was really in a fit (such as that she had been taken through Bishopgate-Street); that Elizabeth had only made a mark on her earliest statements, though she wasn't illiterate and could write; and that the shift she'd supposedly worn for a month in a loft and then walked five hours home in was clean.  Both Gascoyne and Fielding published pamphlets defending their points of view.  Fielding had created an enemy some years earlier in John Hall, a Grub Street journalist, however, and when Hall heard a rumor that Virtue might recant her testimony, he went to see her in the prison where she was still held on the orders of Elizabeth's supporters.  She eventually admitted that she had lied out of fear at being sent to Newgate.  This spurred Gascoyne to talk to the witnesses who had been kept out by the mob, and it became clear that the Squireses had not even been in London at the time of the crime.  In March, Gascoyne had Elizabeth arrested for perjury, and petitioned for a stay of execution for Mary Squires. 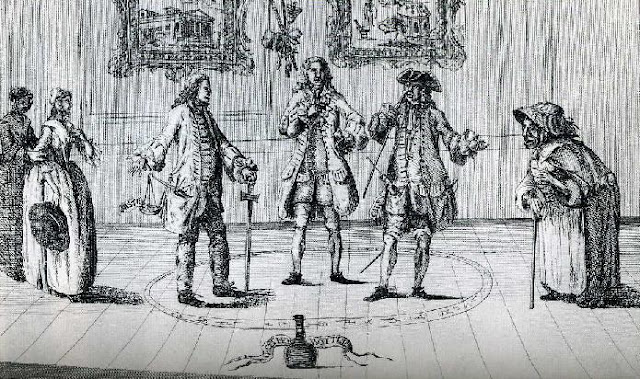 Elizabeth came to trial on April 29, 1754.  At first, she was found guilty of partial, not corrupt perjury, but were asked to choose between innocence and guilt, and the jury changed their verdict to willful perjury.  Her sentence was a month's imprisonment at Newgate, and then seven years' transportation.  The mob continued to support her, however, and both sides produced more publications defending or attacking her.  Elizabeth traveled to Connecticut in August, where she was taken in by the Methodist Reverend Elisha Williams and eventually married John Treat. 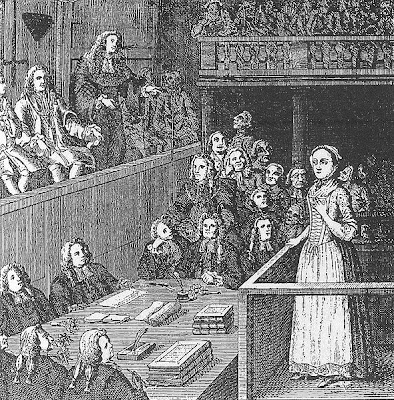 The Trial of Elizabeth Canning

To this day, the true facts are unknown.  The case was continually written about in legal magazines, and Voltaire even wrote a fictionalized version in 1762, presenting his opinion that she had run away to hide a pregnancy.  Other suggestions include: she contracted amnesia; she was lying to hide her own criminal acts; she had been in the house at Enfield Wash, but not as a prisoner, and someone else had been pregnant.