The Place of Fabrics: Linen

November 21, 2011
This is perhaps not the most necessary post/series, but I began looking at historical mentions of various types of gowns for my thesis and found so many sources.  I thought people might be interested in seeing the many quotes I turned up that relate to various gown fabrics.

Linen gowns were close to the bottom of the scale, worn by poorer women in the country, under-servants, and wealthier women in the morning, before anyone came to call.  However, linen that had been printed with a pattern was considered much finer (though not as fine as silk).  While linen could be read as evidence of being poor and slovenly, it could also be used as an antifashion statement, showing a deliberate lack of attention to fashion and frivolity and indicating a deepness of character.  This is especially true later in the century, when a simple country look became fashionable.

A fire was detailed in The Monthly Chronologer of 1752:

In The Rambler (Samuel Johnson, 1750-52), there is a letter supposedly written by Zosima, the daughter of an impoverished country gentleman "detailing a species of cruelty, with which the life of a man of letters perhaps does not often make him acquainted".  She goes from house to house, looking for a place as a servant, but each lady that she speaks to is rude to her.  Zosima is advised to dress her best to visit Lady Lofty, who has just got a place at court, but Lady Lofty makes fun of her for being too fine, and she leaves. 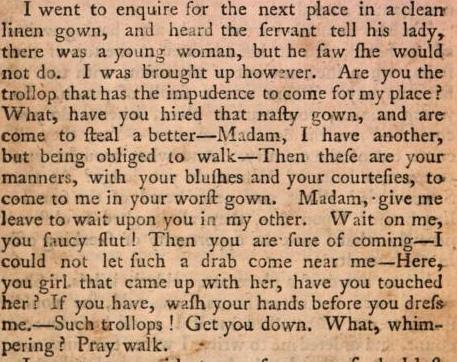 Lady Clementina, from The History of Sir Charles Grandison (Samuel Richardson, 1753), had become engaged to Charles Grandison in Italy, but they break the engagement and he ends up married to Harriet Byron.  In this letter, Clementina wishes to see the woman who has replaced her. 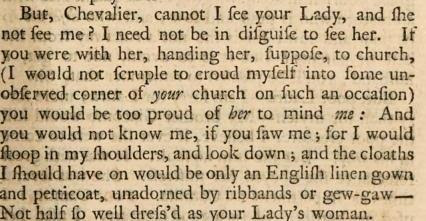 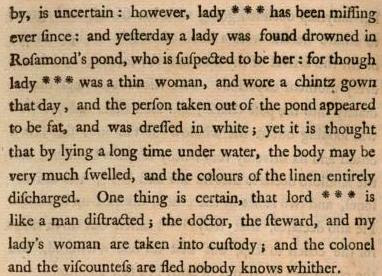 There is a missed-connections personal advertisement in The London Chronicle (May 14-17, 1757) which identifies a pair of women by their clothes. 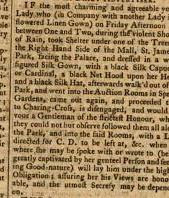 A serialized play, The Minor, in The Gentleman's and London Magazine (1760) features a short mention of a woman in a linen gown who has come to work in a bawdy house.

A poem, "The Link," in A Collection of Poems: in Six Volumes (Robert Dodsley, 1765), explicitly reiterates the connection between the country and linen:

In "Memoirs of L---- Ironside," printed in The Town and Country Magazine (1772), Mr. L maintains constant romantic relationships with women. 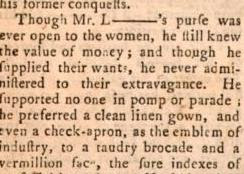 Samuel Cooper calls for a reduction in or abolition of tithes in his Letter to the Clergy of the County of Norfolk (1773).  He especially mentions young women and their dress. 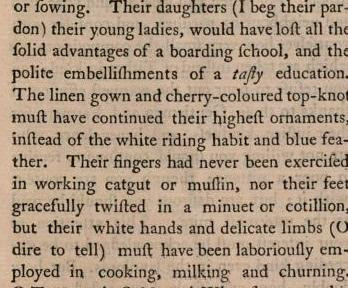 In Virtue in Humble Life (Jonas Hanaway, 1774), a virtuous young woman describes her interview with a kind older lady.

In one scene of A School for Scandal (Sheridan, 1777), Lady Teazel and Sir Peter argue about her extravagance.  He reminds her of where she was before they married:

A woman praises her servant in "The True Point of Honour," in The Lady's Magazine (1778); the girl is extremely attached to her mistress. 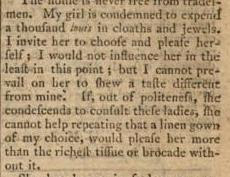 In "A Trifling Pleasure Parted For One Much Greater," in The Children's Friend (Berquin, 1782), a woman and her daughters discuss giving charity to another girl.

In The European Magazine and London Review for August 1786, there is an article about the examination of Margaret Nicholson (whom you may remember from The Madness of King George III; she attacked him with a knife).  She was described:


According to The Life of Mrs. Bellamy (extracted in The Annual Register, 1787), when she met the Duchess of Queensberry, that lady gave her some advice. 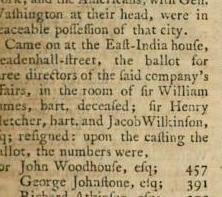 In the story, "The Three Sisters," (The Children's Miscellany, 1788) a rich man is made aware that he has been kept in ignorance of one of his cousins, who lives simply and gives charitably, unlike her wealthy sisters. 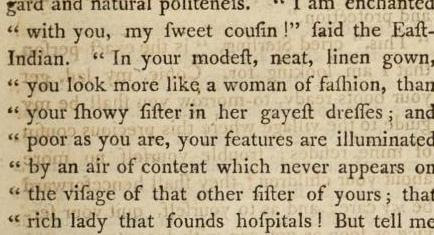 Advice was given to officials in The Annals of Agriculture (Arthur Young, 1790) as to which fabrics would be most economical for charity. 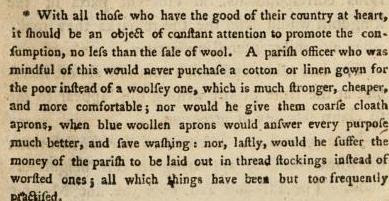 A young woman returns to her family in The Maid of Kent (T. Hookham, 1790), and her father studies her altered appearance: 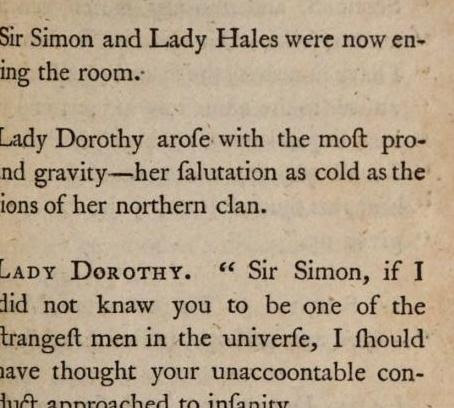 In Charlotte Temple (Mrs. Rowson, 1791), the eponymous heroine elopes from England and is abandoned in New York.  This description is of Lucy Eldridge, the woman that her brother falls in love with:


Her eyes were blue; and her hair, which was light brown, was slightly confined under a plain muslin cap, tied round with a black ribbon; a white linen gown and plain lawn handkerchief composed the remainder of her dress; and in this simple attire, she was more irresistably charming to such a heart as Temple's, than she would have been, if adorned with all the splendor of a courtly belle.

A man and his daughter are described in Letters From France (in The Universal Magazine, 1792); they are a poor family living among rich ones in a French spa town. 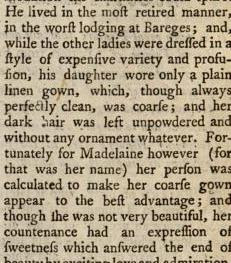 A poem, "Domestic Happiness," was published in The Edinburgh Magazine (1793), explaining all the ways in which the anonymous author prefers his own wife to all others.

In Camilla (Fanny Burney, 1796), Camilla and Sir Sedley go to see a performance of Othello which is comically overset in numerous ways.  At one point, Othello accidentally sets his wig on fire and jumps into bed, which frightens the actress playing Desdemona. 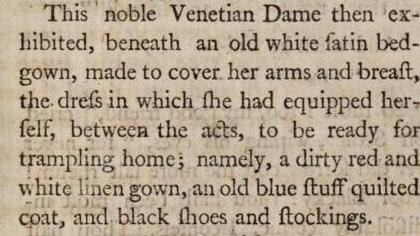