The Place of Fabrics: Stuff

November 23, 2011
I was intending to make a post on wool, but the term "wool gown" does not turn up any results on Google Books.  "Stuff gown," however, is a very common phrase.  Meg Andrews defines "stuff" as "a general term for worsted cloths. Twill or plain weave and made of common wool."  A New General English Dictionary (Thomas Dyche, 1768) defines it as "any sort of commodity made of woollen thread, &c. but in a particular manner those thin, light ones that women make or line their gowns of or with ..."

Stuff was a cheaper fabric than linen; while linen was the fabric that a tenant farmer's daughter would wear, her servant would wear stuff.  Poor women and farm workers are described as wearing it, and it is strongly associated with clothing given as charity.  While linen could also connote a respectable simplicity, stuff could not.


In The Life of Alderman Barber (Edmund Curll, 1741), the Alderman is happy to remain in England:

The titular mouse of "The Good Little Mouse" (The Court of Queen Mab, Countess D'Aulnoi, 1752) arrives at court to witness a royal marriage between the Wicked King's Son and the King's Turkey-keeper.  The Turkey-keeper was refusing to get married, surprising everyone, and the mouse wanted to see her.

In The Adventures of Captain Greenland (W. Goodall, 1752), a lady who is considered by her husband to have gambled too excessively is placed with a physician, who determines that the best course of action would be for her to be confined in calm surroundings with none of her luxuries. 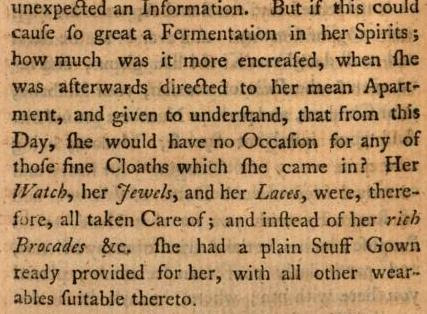 In 1753, a very sensational case was brought to court: a young servant claimed that she had been attacked and stripped of her gown and petticoat while walking home from a relative's house, abducted to a bawdy-house, stripped of her stays, and locked in an attic for a month.  (It transpired upon further investigation that this was all untrue, and she was prosecuted, convicted of perjury, and transported.)  Advertisements placed by her family in the Daily Advertiser during her absence (reproduced in Sir Crisp Gascoyne's Address to the Liverymen of the City of London) described her as wearing: 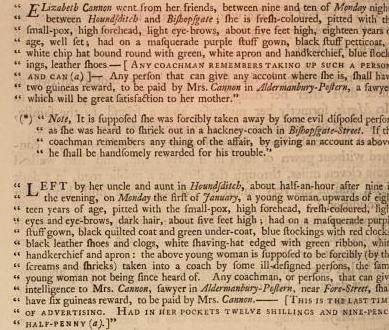 "The History of M. de Pompadour," in The Scots Magazine (James Boswell, 1758), details Louis XV's sexual exploits prior to meeting her.

"The fortunate Isabella," described in The Spiritual Quixote (Richard Graves, 1773), was the only daughter of a poor widow. 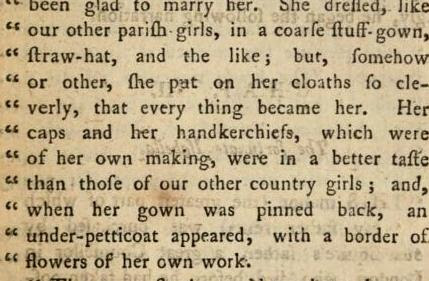 An instructional tale, "The Brothers; of, the Use and Abuse of Trade" (The London Magazine, 1773), describes the wife of a deserving youngest son: 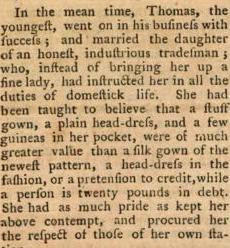 Another improving story, called only "A Tale for Ladies" (The Town and Country Magazine, 1779), described the downfall of a family from the extravagance of a woman. 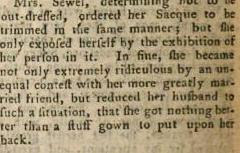 In Sketches from Nature (George Keate, 1779), the narrator describes the situation of a woman he comes across in his travels. 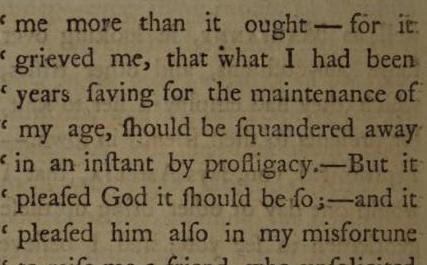 In "A Trifling Pleasure Parted For One Much Greater," in The Children's Friend (Berquin, 1782), a woman and her daughters discuss giving charity to another girl.  The mother says that she will be able to afford a dress for the girl if her own girls will forgo having new silk gowns.

A letter to the editor of The Lady's Magazine (1787) criticizes the dissipation and frivolity of the city consuming country simplicity. 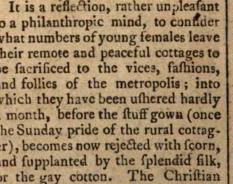 From a description of a court proceeding in The Templar (1789):

A list of garments that could be made cheaply for the poor (Instructions for Cutting Out Apparel for the Poor, 1789) includes: 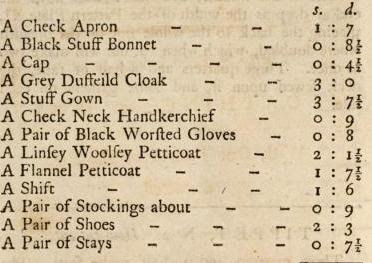 Ladies of fashion dress in an unusual manner for a Lincolnshire benefit ball described in The Lady's Magazine (1791). 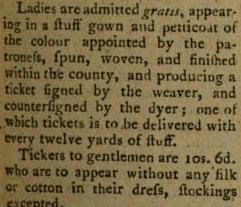 The heroine of The Old Manor House (Charlotte Turner Smith, 1793) is described: 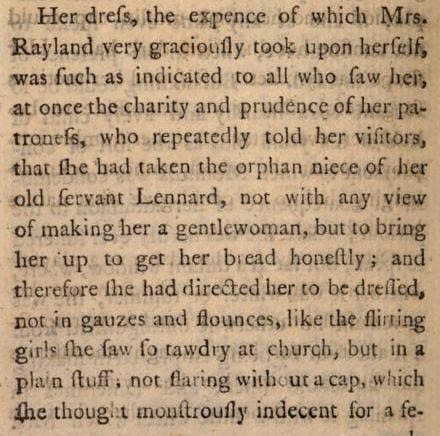 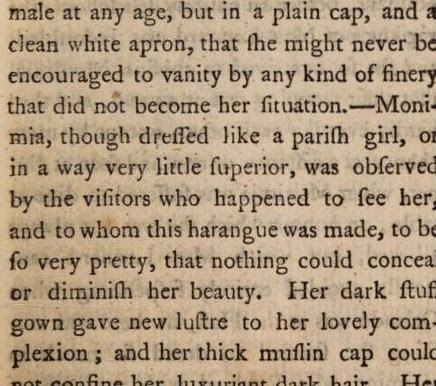 In The Young Philosopher (Charlotte Turner Smith, 1798), an unmarried and pregnant young woman goes to work as a servant for the "uncouth" Lady Kilbrodie.  Her mistress's clothes were described: 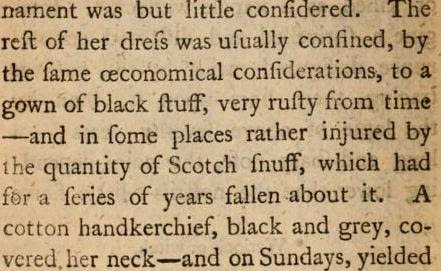 An article on the Grey Coat School in York (The Monthly Magazine, 1798), explains the way that the charity pupils were divided and dressed. 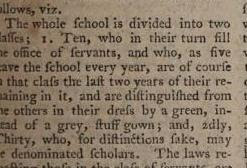