February 06, 2012
I realize that more experienced people than I have already addressed the topic of the transition from gowns with stomachers to the gowns that "fly back" to the gowns with center-front closures, and I doubt that I will actually find anything new.  However, I want to make sure that I understand the 1770s, as I will soon be making a gown suitable for Revolutionary War re-enacting, and I think the best way of doing that is to write up my own synopsis.  Of course, I am mainly looking at fashionable dress here, but that can still say a lot about what is possible in less fashionable dress. 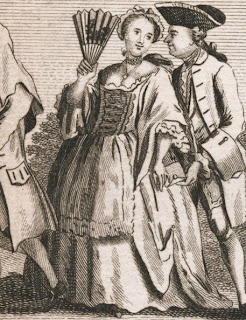 This lady is wearing a trimmed stomacher; her robings also seem to have some kind of gathered trim on them.  Her apron is short - knee-length - and the skirt of her gown is slightly rétroussée in the front.  A short cloak covers her sleeves.  Her petticoat and gown are both long, almost touching the ground.  She is wearing a choker with two rows of pearls, and a small pendant. 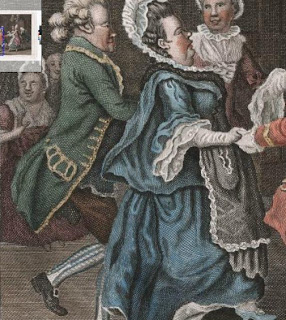 The seated woman in pink on the left has a gathered trim on her robings, and across the top of her stomacher; her petticoat is quite long.  The dancing woman's sacque* is rétroussée, probably through the pockets, and is still long.  Her sleeves end above the elbow and have two self-fabric ruffles.  Her apron, which has pocket slits, is about knee-length, semi-obscuring the trim on the front of her petticoat. 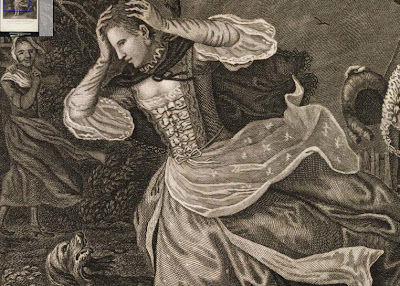 The wigless woman's robings have a sinuous line of thin, gathered trim. Neither the color nor the trim matches her stomacher, which consists of a row of light bows, graduated in size.  Her short cloak, which ties at the neck, is trimmed with lace, and she's also wearing a ruffled choker.  The sleeves of her gown end above the elbow, and have a self-fabric ruffle.  Her sprigged apron, when not blowing in the wind, would probably end a bit below the knee.  The less-fashionable woman in the background has an apron that is about as long as her petticoat, and cuffed sleeves with an oval opening. 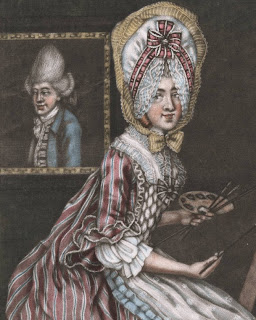 The painter's stomacher looks like it's printed with large, close-set polka dots, and it has a large cockade at the top.  The stripes on her sleeves run down the arm, and the sleeve ends before the elbow (unlike the shift sleeves, which are full and end below the elbow).  Her robings are trimmed with a very narrow, very tightly curved trim, and her kerchief and sprigged apron are both bordered with a gathered trim.  The bottom of her apron isn't visible in this detail, but it is fairly long.


Magdalen seems to be dressed in a Brunswick (I know that the difference between that and a Jesuit is supposed to be the length, but 1770s sources tell me that a Brunswick is traveling dress and a Jesuit specifically buttons up to the neck and down to the wrist - clearly this does not button up to the neck, but it is some kind of hooded, long-sleeved traveling outfit) that ties across the matching stomacher at the chest.  The robings, hood, and sleeves are decorated with straight, gathered trim.  Her choker is made of two rows of large pearls, tied with another ribbon. 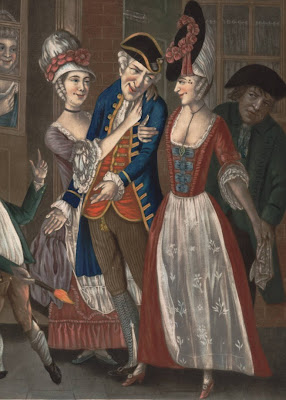 The woman on the right has a row of narrow, gathered trim on her robings, and an echelles stomacher like the one in "The Ladies Disaster".  Her sprigged apron (probably made of pre-embroidered fabric) is as long as her petticoat, which is ankle-length.  There is a bow on her sleeve above the ruffles - there would be another, most likely, on the other arm if the artist had not accidentally neglected to draw it - and the crown of her hat is lushly circled with them as well.  She is wearing a pendant on a black cord.  The woman on the left has two fly-fringe-trimmed self-fabric ruffles on her sleeve, and a very narrow band of gathered trim above them.  Her gown is pulled up through the pockets, above a flounced and trimmed petticoat.  Her apron is plainer and shorter, cut below the knee.  Her cap has an unshaped ruffle, rather than being round-eared, and her choker is a thin black ribbon.  Both women have heeled shoes with buckles, and lace on the neckline and flounces of their shifts.  The woman on the far left, inside the bagnio (possibly a servant), is dressed in an untrimmed dress and plain stomacher, and her sleeves are cuffed. 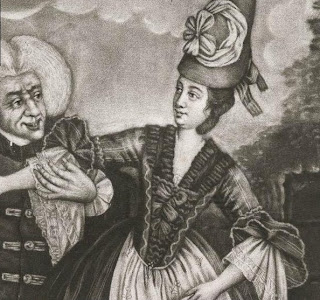 This woman has a narrow, winding trim down her robings and across her stomacher (which is not quite an échelle, as there are only three bows) in rows.  The stripes run down her sleeves, which end in a gathered band and two self-fabric ruffles, all trimmed in fly fringe, which might be the same as the winding trim - and her ruffles appear to be circles cut out of fabric rather than pleated to fit the sleeve.  Her apron, pre-embroidered fabric again, is just a bit shorter than the petticoat, and may be held down at the center front with a brooch.  Her narrow black kerchief is trimmed along the edges, like the painter's, and her beribboned hat is strongly shaped, like the prostitute above.  A ruffle on her shift shows through her kerchief above her stomacher.


Queen Caroline is wearing a Brunswick, like Magdalen, but hers is decorated with fur rather than gathered trim.  Rather than just tying across the top of the stomacher, it ties four times, with ribbons that are pinked at the ends.  Her pendant is hidden under her stomacher, and hangs from a cord.

Mrs. Winthrop's blue satin gown has a gathered trim running straight down the robings and across the top of her stomacher, which is somewhat obscured by a pair of large bows.  Her kerchief and ruffles are embroidered in matching whitework embroidery, and the self-fabric ruffles of her gown have an applied, scalloped, self-fabric trim.  Her choker is made up of six strands of pearls.

At the beginning of the decade, fashions were much the same as they had been for some time.  Gowns closed over a stomacher, skirts were long, and sleeves were ruffled.  Gathered trim might be meandering or straight.  The only things that surprised me at all were:


* I'm changing my terminology for two reasons: 1) this is shorter than française and 2) I think terms like "sacque" have been somewhat neglected because the "robe à la ..." construction sounds more scientific.  So I'm trying to give the period English terms some more credibility.  At the same time, period magazines seem to use "gown" for anglaise, which could be very confusing, and "polonese" is not really that different than polonaise, so it could be confusing/look like I just can't spell.

** A word about museum objects and dates.  I'm sure most people know this already, but occasionally I see someone who doesn't seem to and I just itch to tell them, but it seems like that would be rude.  So.  Please, never take a museum's date on an extant garment as solid fact.  It very well might have been accessioned by someone with little knowledge of fashion history, or by someone years ago who didn't have the benefit of recent research.  Use your own judgment: if you're reading and writing fashion history blogs, you probably know enough to make a good guess.  Take, for example, the sacque I linked above - the museum has it dated "1750-75".  We know that closed-front gowns cannot be attested during those years, however, and that the fabric is not likely to be earlier than 1770, so I dated it on Pinterest as ca. 1778.
1770s 18th century gown research