The Writer's Guide to Costume: "Flapper"

March 30, 2012
Originally, this post was going to address 1920s fashion as well, but I think that will wait until later.  There is enough to discuss in just the meaning of the term!  My issue is with the tendency of people to ascribe the term "flapper" mainly to the 1920s (perhaps mentioning that it was used before then, but ignoring how frequently it was used before then) and of the simplistic description often given of the rise of the type; later I'll address the realities of 1910s and 1920s dress as compared to the image of the flapper.


"Flappers" in the 1920s was a term applied to a "new breed" of young Western women who wore short skirts, bobbed their hair, listened to jazz, and flaunted their disdain for what was then considered acceptable behavior. - Wikipedia


The term "flapper" has its origin in the Victorian era.  Some nineteenth century dictionaries define it as meaning "a young bird when first trying its wings", while others note that it was a dialect word for "a young partridge just able to fly" and was also "applied in joke to a girl of the bread-and-butter age".  It was established enough by 1915 for Mary Roberts Rineheart to write, in the Saturday Evening Post, "To him I was a flapper, nothing else. Whether flapper is a term of reproach or one of tribute depends on whether the girl is a débutante or in the first line of the chorus of a musical show.  Oh, I wasn't very old, but I knew my way about."  (It was not impossible for the term to be used about a young man as well.)

The meaning of the term when used in reference to young women tends to be given euphemistically during the 1900s and 1910s, but it seems to mean a teenage girl who has developed a figure, generally 13 or 15 to 17 or 18.  The Theatre Magazine comes the closest to spelling it out: "And it is no easy matter - this finding of suitable wearing apparel for a miss of tender years but developed growth. One is so apt to swing a trifle the wrong way."  Both women's and men's lives were divided up into strict partitions: infancy, childhood, girlhood and boyhood, womanhood and manhood.  While someone was in girlhood, she was expected to behave as a girl and to be treated as a girl, not an adult.  Once she was a woman, she would change her whole manner of dress (usually, longer skirts and done-up hair) and deportment.  Flappers upset this order - they didn't fit into it.  They were meant to act like girls even though they looked like women.  The Theatre Magazine's article on fashion for flappers focuses on how parents can dress their daughters to avoid putting them into women's dress too soon, signalling that they were adults ready to be married, while also avoiding making them look ridiculous in too-girlish clothes that were physically wrong for them to wear. 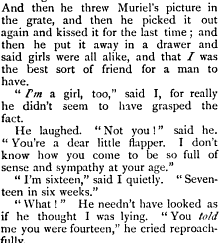 In Bunker Bean (1913), the term is used repeatedly in reference to a young woman that the main character knows who is part of the women's suffrage movement.  An illustration shows a woman who looks completely demure and respectable. 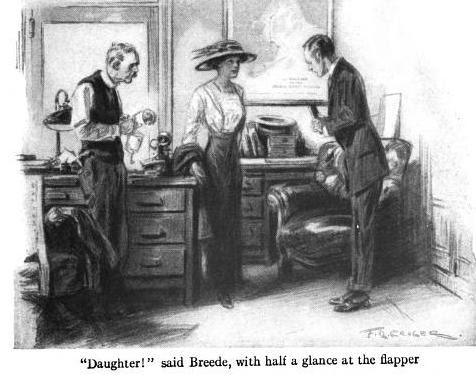 (There is also an interesting long passage in which the flapper's grandmother reminisces about the 1870s.)


Flappers had their origins in the period of Liberalism, social and political turbulence and increased transatlantic cultural exchange that followed the end of World War I, as well as the export of American jazz culture to Europe. - Wikipedia


The term "flapper" first appeared in Great Britain after World War I. ... During the war, the boys had fought against both the enemy and death in far away lands; the girls had bought into the patriotic fervor and aggressively entered the workforce. During the war, both the boys and the girls of this generation had broken out of society's structure; they found it very difficult to return. - About.com

As "flapper" was a commonly-understood term even before WWI, the origins of the type cannot be put down to its end.  An article by "Frances" in TP's Weekly (1914) goes into depth on the more judgmental meaning of the term. 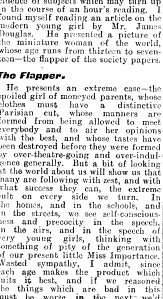 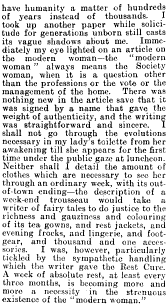 "He presents an extreme case - the spoiled girl [whose age runs from thirteen to seventeen] of moneyed parents, whose clothes must have a distinctive Parisian cut, whose manners are formed from being allowed to meet everybody and to air her opinions with the best, and whose tastes have been destroyed before they were formed by over-theatre-going and over-indulgence generally."

Frances is very clearly blaming the flapper's parents for giving her too much freedom and for spoiling her, as does the narrator of Reflections of a T. B. M. (Roger Livingston Scaife, 1922).  By the end of the Victorian era, the middle and upper classes had established a new idealization of childhood, in which children were more highly valued and more kindly treated.  It is possible that the better treatment of children led to more outspoken flappers - or that older contemporaries blamed parents for "spoiling" their children and allowing them to run wild (a complaint made about every generation).

World War I may have seen a shift in the term's meaning.  In "Putting the Flappers to Work" (Commerce and Finance, 1917), the writer quotes a Mrs. Robins as saying that "55 per cent of the women of the United States are 'flappers'" - members of a leisured class who "merely exist[ed]", were useless rather than cute, and were being called to take men's jobs during wartime.  However, in A Woman's Woman (1919), the main character refers to an irritating girl her son likes as a "giggling flapper", drawing on the original meaning that related more to age.

While some references in The Mixer and Server (1922) are clearly about younger girls, others are about women of marriageable age, a few years older, who have ruined their chances by losing their "mystery"  and being indiscreet.  A description of the film The Married Flapper (in Motion Picture, 1922) makes it clear that the women called flappers were mostly unmarried, as they normally gave up many "flapper" behaviors after the wedding.  "A Flapper's Appeal to Parents" (The Outlook, 1922) shows that the label still hinged on youth, but was by that point about more than simply being at an in-between age.  Its writer, Ellen Welles Page, points out that this flapperdom was partially caused by the war and the huge changes it had brought about in the lives and spirituality of the people who had lived through it - however, she mainly lays the blame on the parents who have called her generation lazy and ill-behaved instead of trying to talk to them about their problems, which are much different than the older generation's were at the same age.  Tellingly, an article in The International Interpreter (1922) compares the flappers to the Incroyables of the French Revolution - young people living through a time of difficult social unrest.  (The writer also points to George Bernard Shaw's Back to Methuselah (1921), where a character defines "flapper" as "a female who
is no longer a girl and is not yet quite adult".)  It seems likely to me, given the ages of the flappers, that they had not been in the workforce during the war and were not reacting to the loss of freedom after soldiers returned.

On a different tack, a writer for the Dearborn Independent (1925) sets it down to a "natural process of work, toward that equality of the sexes which laws might decree but could not obtain", and praises the modern young women.


The flapper did not appear, fully-fledged (pun intended), after the armistice.  The young flappers of the prewar period set the stage for the women of the 1920s, and in many cases probably were the same people.  The term itself could be used in multiple ways - girls who were too old to be children and too young to be grown up, girls who were fashionable, girls who were frank and not squeamish, girls who did little out of the ordinary but happened to be given the label.  It is not a useful one to attach to all fashionable women of a ten-year period.
1920s 20th century mythbusters writer's guide