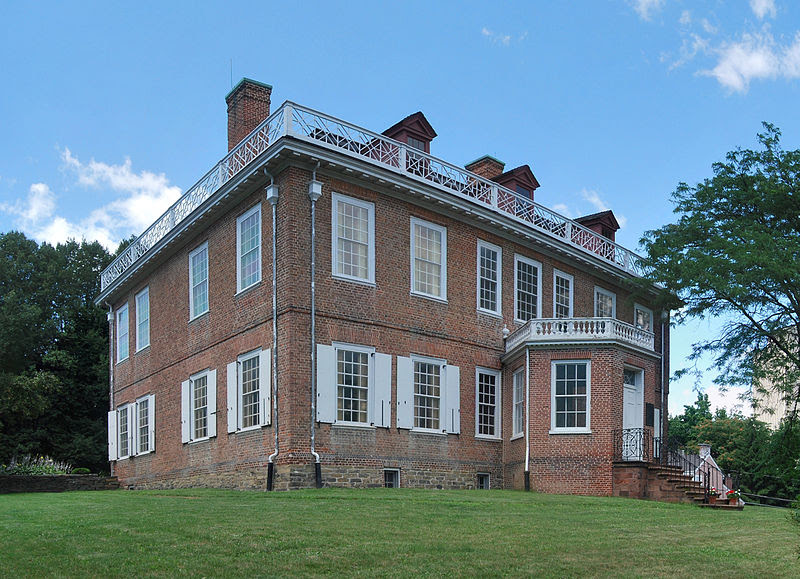 Well, I have to admit that I didn't take any pictures - but honestly, there wasn't as much to see as I expected.  From the description, I thought that the first talk, on "the painstaking research and construction methods behind reproduction period clothing made especially for site staff", would be aimed at people who were already familiar with eighteenth century dress; however, it was much more basic than that.  There really wasn't any discussion of specific methods of construction, and the research shown didn't seem to include examination of extant garments.  There were three ensembles on dress forms (nice Wolf forms): one upper-class Dutch colonial, one RevWar, and one ca. 1790.  Now, they weren't bad, but they each had significant issues that made me think they should not have been presented as reproduction garments.  I think the reason the term was used as an alternative to "costume", with its theatrical connotations (though I tend to use it in the older sense myself, "a set of clothes in a style typical of a particular country or historical period"), but the trouble is that "reproduction" implies that a garment is a copy of a specific extant one.  If a gown isn't made from an Arnold-type pattern or based directly off an extant piece, I don't think that it ought to be called "reproduction".


- The Dutch costume did not seem to be based on an extant garment - they said the pattern had been created from scratch.  The painting the bodice was based on was shared, and I could see why they made it as they did, but there is a pattern in Waugh that is pretty much a perfect example of the garment the women in the paintings are wearing.

- The Revolutionary War outfit consisted of a "caraco" and petticoat.  The seamstresses brought up that the garment had been challenged by another group saying there's no proof it had been worn in America, but said they had defended it by pointing to one in the Williamsburg Collection and one in the Snowshill Collection (in Arnold).  Neither of these have provenances given in the books where they found the examples, so it's quite possible the former wasn't American, and the latter very probably wasn't.  (I have my own issues with the garment, at least in the name, but that's for another post.)  The existence of an object in an American museum does not make it American.

- The 1790 gown had odd princess-line seams from armscye to waist, straight sleeves, and a back closure.  I don't want to say that none of those elements could appear on a gown from that year, but I've never seen an extant gown with them.

(Also, they described tied-up skirts as polonaise, but you know all of my feelings on that one already.)

Edit to add: With the research I've since done on the fourreau, this gown seems more accurate in conception, but my criticism on the execution - the princess seams, the straight sleeves - still stands.

Overall, I had the impression that the research was the sort of a previous generation, based on secondary sources.  It's very important to challenge received wisdom from secondary sources, to check it based on primary ones, especially if one is representing an institution.

The second part at Fort Crailo actually felt more authentic to me.  The woman who gave the talk there was a PhD student who had grown up re-enacting; she created costumes for a short film recreating a Dutch genre painting and a court case from Fort Orange.  No criticisms there, except that a man in the painting seemed to me to be wearing a pinked jacket with hanging sleeves, and it was interpreted as a vest and cloak.  (But you wouldn't know it was me if I didn't have something to whine about, right?)  It was great to see a new historical site as well!