Quite a Lot of Gown Progress

April 22, 2012
It's so nice when one finishes a foundation garment and gets to move forward on outer clothing.  The latter moves so much faster!

For the most part, I used the pattern I took from the sacque at the Albany Institute - the lining would be the same for either a sacque or a gown, in this case, since the saque lining has no lacing or ties beneath the pleats.  Fortunately, I scaled it up well and it turned out well right off!  Although I did make the back go a little too high up my shoulders, as you can see by the placement of the shoulder-strap seam in the picture below.  (I need to unpick the topstitching on the pleats and cut it down soon.) 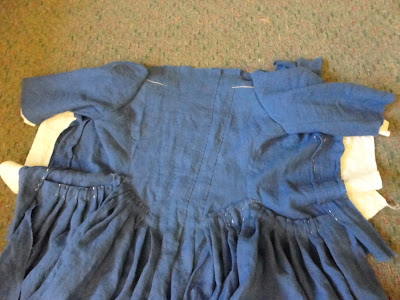 Today, I sewed the lower part of the armscye, but did not get around to pleating the top of the sleeve. Here you can see that I messed up a bit when pleating as I forgot to include a CB reverse box pleat.  Next time!  The skirt pleats (done by my wonderful mother) are just pinned to the outside, but I'm going to sandwich them between the lining and blue linen once I have the shoulders finished. 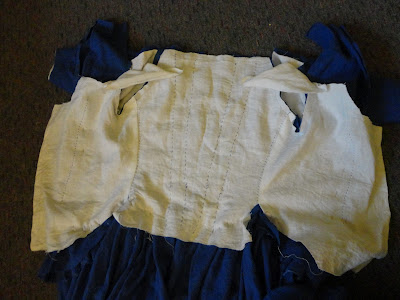 And the interior.  I actually would have had the sleeves finished today if I hadn't had to work out why the sleeve didn't fit in the armscye (due to the height of the back making the armscye too large). 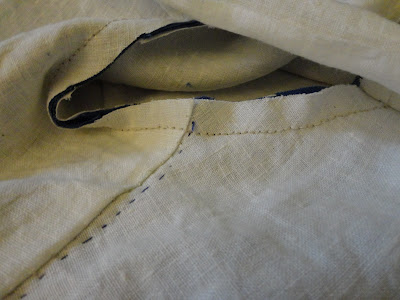 The shot I took of the other armscye showed a really crooked seam, but I think this one is rather nice.  I can do small, even backstitches when I put my mind to it.  For a quick rundown: the blue linen is fabrics-store's True Blue, 5.3 oz; the lining is their bleached white, 4.3 oz; and the threads are William Booth, Draper's 35/2 unbleached and 50/2 royal blue linen thread.  (The sleeve lining is actually fabrics-store's bleached linen/cotton blend, 4.3 oz.  I bought lots of it ages ago for my Tudor outfit, and it comes in handy when I run out as I did here.) 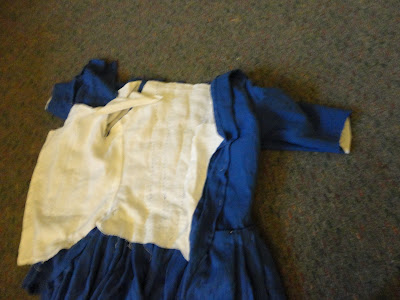 So you can sort of see the front, although that's still a bit messy.  The robings of the sacque were completely separate and applied, but I decided to use the technique I saw on a yellow damask gown at the New York State Museum and simply pleat the outer fabric into robings.  This was good in that it takes out some steps, but it's also kind of complicated and fiddly and annoying.  I already sewed the pleat underneath the robing down, but when I put the gown on for Mom to pleat the skirt the other day I realized that the robings don't angle in enough.  This isn't the end of the world - there's enough fabric in the pleats to unpick the stitches and fix it - but it'd also be easier to adjust the robings if they were separate parts.
1770s 18th century gown photos