It is hard to understand Victorian era purses without first understanding Queen Victoria and her long rein over England. Her influence was so pronounced that it greatly affected styles and her middle class attitude was reflected in fashion. - Victorian Era Purses

It's easy to understand why this misconception exists.  The era is named for Victoria and therefore the fashion is referred to as Victorian, which implies that the fashions were created by her.  (I don't know where the idea that she had a "middle class attitude" comes from, though.)


In 1837 the young (18 years old) and lovely Queen Victoria ascended to the throne, and introduced new ways of dressing that set the tone for ladies of style and status for the next 60 years. Indeed women all over the world tried to emulate this much-adored queen. ... Following Victoria’s lead, fashion was at once modest and elaborate. - Recollections

In the early 1830s, fashionable dress involved ludicrously large sleeves and comparatively short skirts, as part of a trend that had been building since about 1805.  Fashion is about change, however, and it was time for one.  The sleeve puffs, declining, had migrated from the tip of the shoulder out to the upper arm by 1833, and over 1835 and 1836 the puff collapsed, gradually moving down the arm and decreasing in size.  By 1837, a variety of sleeve styles with puffs and ruffles in different locations and combinations were portrayed in fashion plates.  Skirts had also been lengthening at the same time.  Victoria became queen in 1837, of course, and it's easy to contrast fashion plates from 1833 and 1838 and imagine that the change suddenly occurred because of this great event between them.  But it didn't. 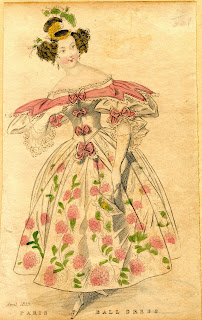 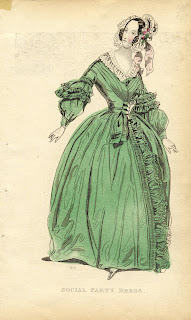 In 1840, Queen Victoria of England married her cousin Albert in a white gown of satin and lace. ... This would start the trend toward white wedding gowns. - Business Builders in Fashion, p. 137

Here is a painting by Franz Xavier Winterhalter of Queen Victoria in her wedding dress, 1842:

Here is a fashion plate from several years earlier:

Victorian fashion created by Queen Victoria in England ...  - VictorianEraCNR (The latest post on this blog is about corsets and is full of misinformation.  Corsets did not cause mass sterility!)

Americans, long apt to follow the fashion lead of England’s Queen Victoria ... - The Rise to Fashion of the Paisley Shawl

Wealthy women of the time followed Victoria's lead in dress and leisure pursuits. ... Queen Victoria enjoyed a long reign, spanning 64 years. Her fashion influence gradually changed over time, so the end of the era differed markedly from the beginning. - Victorian Fashion History

Queen Victoria was the trendsetter for fashion and jewelry for women ... as always, British women followed her fashion lead. - Fine Victorian Jewelry

Napoleon III became the emperor of the Second French Empire in December 1852, and married Eugenie de Montijo in January 1853.  Empress Eugenie was a serious fashion leader: not only did dressing well benefit her personally and reflect well on the throne, but it encouraged others to spend on clothes, which helped France's luxury goods industry.

Charles Frederick Worth went into business with Otto Bobergh in 1858 as Worth & Bobergh.  In the next year, Worth's wife, Marie, introduced his work to Eugenie's friend Pauline Metternich (wife of the Austrian ambassador and one of the most fashion-forward women of the time), and she began to wear his designs to court functions, bringing them to Eugenie's notice.  Eugenie's patronage resulted in Worth becoming the father of the modern couture system, and the designer of the nineteenth century.

He was famously controlling, creating ensembles and trends without reference to his ordinary clients' opinions  The cage crinoline was already a necessary part of fashion - helped to an extent by Eugenie and Pauline - but under Worth's influence it grew larger.  When he felt a change was needed, he made the hoop more elliptical, and then modified it into the bustle.  The French Empire was overthrown in 1870, but Worth and his fellow Parisian couturiers continued to thrive.

Edward, the Prince of Wales, had married Alexandra of Denmark in the 1860s, and Alexandra was to be a strong influence on fashion for decades, far outlasting Eugenie.  In general, Alexandra and Victoria didn't always get on too well.  Denmark and Germany were enemies, so Alexandra was not sympathetic to that country even after her marriage into the very German Saxe-Coburg-Gotha family.  (Victoria's ancestors, the House of Hanover, had pretty much exclusively married Germans as well.)  The Princess was also rather more fun-loving than Victoria.  Unlike the heavy-set Queen, she was slender and laced her corset tightly, setting off beautiful and fitted gowns.  Her most famous fashion innovation was the high collar/choker necklace worn with a low neckline, which covered a scar she'd had on her neck from childhood.

Like Paul Poiret, Worth made a lot of claims about his guiding hand on fashion that may very well be slightly exaggerated, but the fact is: much of Victorian fashion came from Paris.  When it was influenced by England, it was influenced by the younger and more interested Princess of Wales.
19th century mythbusters