June 07, 2012
For my first review, I'd like to go with a "favorite" of mine - The Lady and the Highwayman.  It's an adaptation of a Barbara Cartland novel that, surprisingly, stars Hugh Grant (not that surprising, thought, as a lot of established actors seem to have worked on one or another of these).


Plot: The film begins during the time of the Commonwealth, just before the Restoration. Lady Panthea Vyne is harassed by a Cromwellian tax collector into marrying him, but after the wedding they're waylaid by the notorious highwayman Silver Blade (aka Lucius Vyne, Panthea's cousin), who duels the tax collector and kills him, taking his ill-gotten gains to return to the poor.  Panthea goes back to her house and pretends it never happened.

Years pass, the Restoration happens, and everyone is happy.  Panthea's aunt takes her to court to meet Charles II, but she also meets his mistress, Barbara Castlemaine (as they call Barbara Palmer here), and Panthea's cousin Rudolph, who are a pair of schemers.  Barbara is worried that Charles's interest in sweet, innocent Panthea - as well as Panthea's friendship with the oddly cheerful Catherine of Braganza - will lead to Panthea becoming the next royal mistress, so she does everything she can to get rid of the other woman.  Eventually, this culminates in Panthea being tried for the tax collector's murder when Charles is out hunting or something like that.  Silver Blade is also arrested as her accomplice - Lucius has remained undercover to help seek out Charles's enemies - and things look very bleak.  Until they are, of course, rescued, but it is all most angsty and dramatic until then.  The movie ends with a happy cousin-marriage.

One of the things I love the most about it is the hamminess.  What I want from a villain is a willingness to shout lines like, "Then die - die with your puling, green-stick maid!"  Barbara, played by Emma Samms, is fantastically entertaining and even though she's pretty much nastiness incarnate, you kind of want her to win in the end.  The movie as a whole is quite dedicated to playing out its clichés with gusto and without apologizing for them.

Costumes: Very surprisingly for a movie of this vintage and quality, the costumes are pretty great. 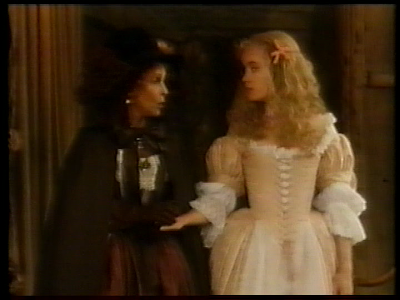 What Panthea wears when she's just chilling at home. Nice, full shift sleeves, a deep front point, puffed sleeves, and overall a willingness to be a bit unattractive to modern sensibilities.  17th century stays don't give a very narrow waist, and the big sleeves aren't particularly flattering either, but they went there. 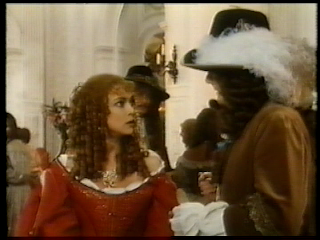 Barbara and Rudolph.  Rudolph's hat has a great big plume; Barbara's neckline (though a bit skewed) would hit at just the point of the shoulder rather than being completely off it, the way you often see it worn in period movies, which is a pet peeve of mine.  The point is to give a slope to the shoulders, not emphasize the corner! 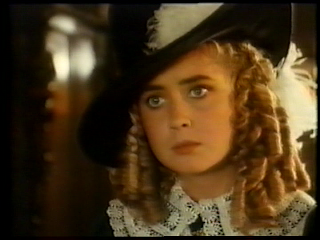 Panthea has a fashionable Restoration-era face shape - round, almost a little squared at the jaw.  In general, they did a pretty good job with the hair.  Of course, sometimes they go pretty 1980s with it (see below), but for the most part they stick to curls at the sides of the face and hair combed straight back off the forehead or parted in the center. 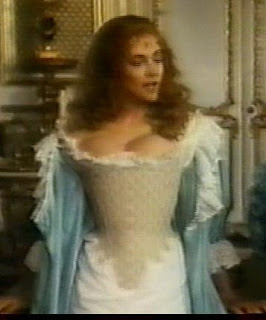 Barbara in her stays, which have a pretty good shape, though a bit extreme.  Negligée dress was becoming a big deal at that time, so it was good to see some of that as well. 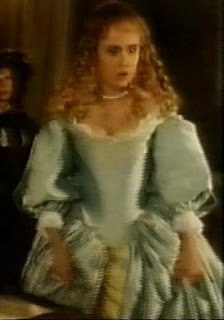 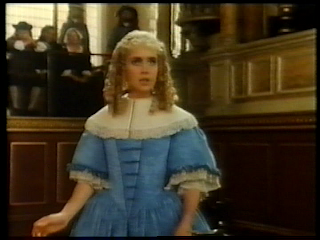 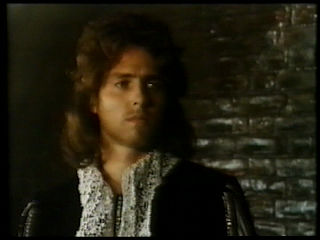 Hahaha, look at that hair.  Usually he wears a hat.  But his collar gets the look of needlelace, I think. 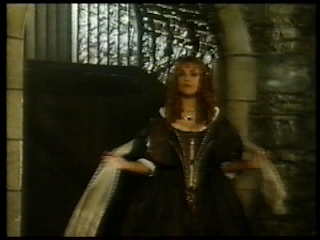 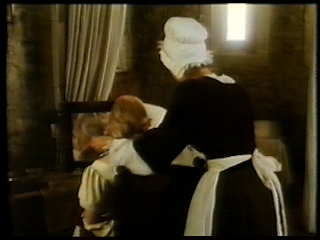 One of the few wrong notes was Panthea's maid's dress - black with white looks right to us for servant clothing, but at this time black was still expensive.  If she's a lady's maid, she ought to be dressed more like Panthea but a little toned-down.  I do like the vandycked (a 19th century term, I know) edging on her cap, though. 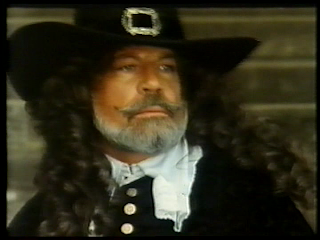 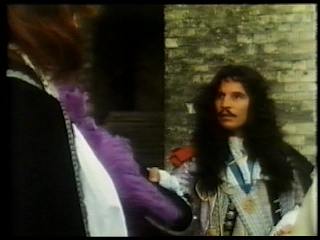 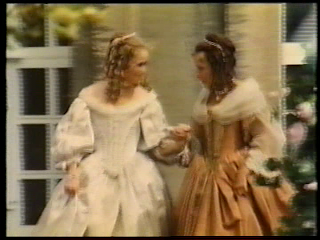 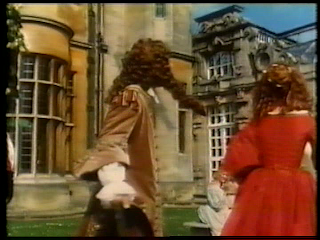 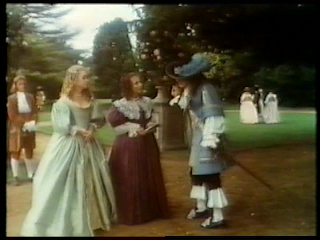