August 31, 2012
Ages back, I did a poll on what sort of posts I ought to do, and while costume drama reviews came out as the most popular (and ... I've since done one), portrait costume analyses proved to be the second most popular choice.  Ive never gotten around to writing any, partly because I get anxious that I don't have anything really impressive to say, but I hope to get around that with practice.  Due to the chemise pattern I recently posted, I thought I'd start with a mid-nineteenth century example: Joséphine-Éléonore-Marie-Pauline de Galard de Brassac de Béarn, Princesse de Broglie, by Jean-Auguste-Dominique Ingres. 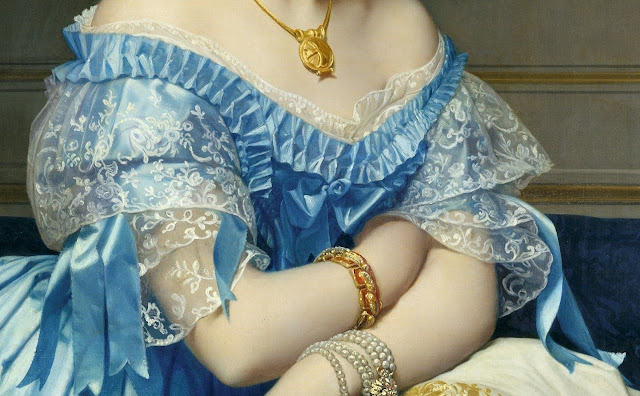 Joséphine is wearing an evening dress of a light blue silk taffeta, very reminiscent of the mid-eighteenth century.  The broad v-neckline and armscyes are trimmed with box-pleated strips of taffeta, and the front appears to be decorated with matching bows, also eighteenth century touches.  Her short taffeta sleeves might be puffed, with the puff folded out into a kind of flat fin; each of these is covered with a wide lace oversleeve and trimmed with blue silk ribbons, and there are also two wide lace ruffles at the bottom of each (and a similar narrow lace ruffle inside the neckline).  The lace resembles the engageantes worn by eighteenth century women.  This period was fascinated with the mid-to-late eighteenth century, in part for the history (Marie Antoinette and her contemporaries had become interesting to French high society almost as soon as the Terror was over) and in part for the aesthetic.  Wide, supported skirts, frothy lace ruffles, self-fabric trim, and pale fabrics were all seen as attractive aspects of Rococo clothing to imitate.

Due to the extreme spring of her skirt from her waist, it's likely that she's wearing a cage crinoline.  At this point, the cage was beginning to be worn by the very fashionable - and as a French princess, one would expect Joséphine to be at the forefront of fashion.  She is obviously also wearing a corset and a chemise, which has a very wide neckline to allow it to be worn off the shoulders. 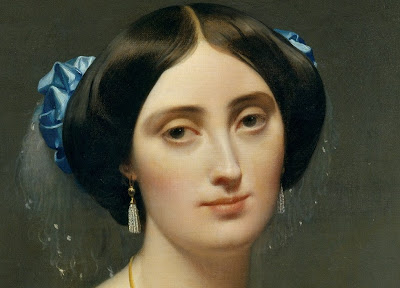 Joséphine's hair is parted in the center and arranged (probably using rats) in a fashionable, sleek style that focused on an impression of heaviness and mass, widening the head.  Her headdress is made of the same blue silk taffeta of her dress; it's in the form of a ruched and textured band or semicircle trimmed with a floaty white fringe, which was a fashionable trim for clothing and accessories in the 1850s. In this era, it was very common for headgear to sit at the back of the head and show at the sides, adding to the impression of width already given by the hair. 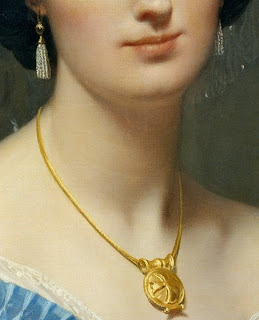 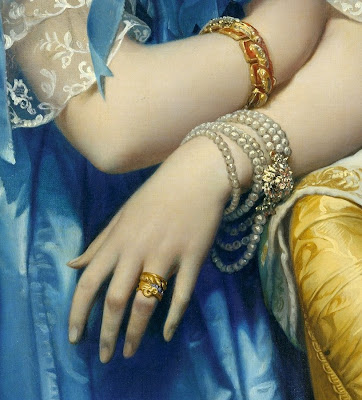 None of Joséphine's jewelry matches.  She is wearing a pair of drop earrings, a gold necklace, a gold and amber bracelet, a triple strand of pearls wrapped around one wrist, and a gold ring.  The earrings are silver hooks, each with a ball and a fringe of loops, beaded with clear glass seed beads, echoing the trim on the headdress.  Her gold pendant hangs on a gold cord; the pendant is in the shape of a disk with a raised cross patonce (all the arms end in scallops, used in heraldry), with flared tubes on top for the cord and a cylinder on the bottom.  This was probably considered in the antique style at the time, or a revival of medieval style.  The bracelet on her right wrist also appears to be in the antique style: gold-bordered amber squares, attached to each other with curved gold bars (possibly studded with diamonds?).  The pearls could possibly be a necklace, as the three strands are long and wrapped twice around her wrist; the large silver sunburst or floral ornament might be a clasp.  Pearls were often worn in the eighteenth century around the neck or wrist in single or multiple strands, making this another Rococo reference.  The gold ring may be a wedding band, as it is on the left hand, but it is more elaborate than modern wedding rings - it's molded with a twisted cord pattern and a figure-eight motif, and studded with small stones, possibly amethysts. 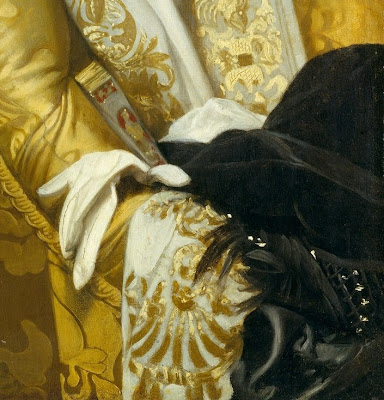 While I'm not sure about the black fabric on the chair, the white cloth embroidered with gold thread is most likely a shawl.  A pair of white gloves are draped over the arm of the chair, probably elbow-length, given Joséphine's evening dress.  The folded fan tucked into the cloth on the chair looks like it has mother-of-pearl sticks, and is decorated with some kind of Neoclassical motif in red and gold paint.  The top of the fan's leaf appears to be gilded or bound (as a raw edge of fabric can be bound) with a strip of silver or gold foil, as was seen on very fine fans at the time.
1850s 19th century portrait analysis