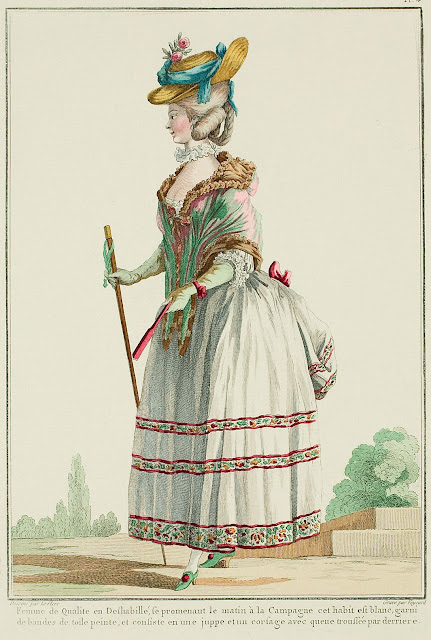 Lady of Quality in Undress, walking in the morning in the Country.  This dress is white, trimmed with bands of painted cloth, and consists of a petticoat and a bodice with a tail pulled up in the back. (1778)

Demi-polonaise, or polonaise à la liberté.  It is a diminutive version of the bottom part of the gowns that Court Ladies, obligated by etiquette to be seen in public in the morning, adopted long ago, which made a rather happy addition to the new fashions.

The demi-polonaise consists of a petticoat, to which is attached the bottom of the polonaise, or simply a polonaise tail pulled up as usual; it is as comfortable as it is pretty, and has the double advantage of making one appear fully dressed when one isn't. 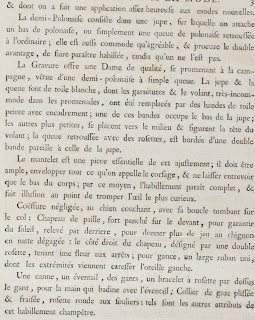 The Print shows a Lady of quality, walking in the country, dressed in a demi-polonaise with a simple tail.  The petticoat and the tail are of white linen, of which the trim and flounce, which are very inconvenient while walking, were replaced with bands of fabric painted with borders; one of the bands is on the bottom of the petticoat; the other, smaller ones, are placed in the middle and appear at the top of the volant;* the tail, which is pulled up with bows, is bordered with a double band like that of the petticoat.

The mantelet is an essential part of this ensemble; it must be ample, entirely enveloping what one would assume to be the bodice, and only allow the sight of the lower part of the body; thereby completing the ensemble, and creating an illusion to fool the curious eye.

Undress coiffure au chien couchant,** with a curl falling on the collar: straw hat, strongly tilted to the front for protection from the sun, pushed up at the back to give more play to the chignon in the free braid: the right side of the hat, indicated with a double bow, holding a flower; for braid, a large, plain ribbon, the extremities of which come to caress the left ear.

A cane, a fan, gloves, a bow around the wrist of the glove of the hand which plays with the fan, pleated and frilled gauze collar, round rosette on the shoes: such are the other attributes of this rural ensemble.

* That is, the area where the volante would be attached if there were one.
** "Lying dog" style.  Further research is required to determined exactly what it consists of, but because it is a returning term I have left it untranslated in the text. 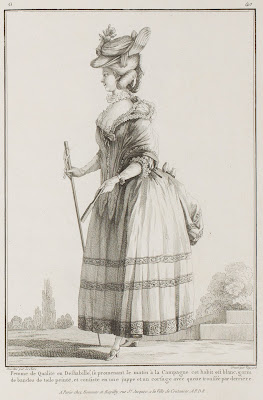