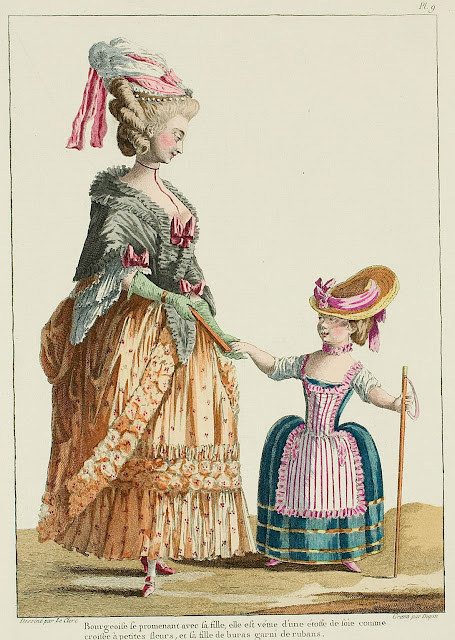 ,
Bourgeoise walking with her daughter, she is dressed in a silk dotted with little flowers, and her daughter in buras trimmed with ribbons. (1778)

Bourgeoise walking with her daughter; she is wearing an informal gown and petticoat of the same material, pulled up at the sides with cord or gold braid.*  Trimming in two rows of poufs; volant very high, in regular pleats, with a band of double poufs at the top like the trim of the gown. 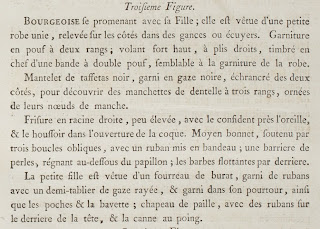 Mantelet of black taffeta, trimmed with black gauze, scalloped on two sides, not covering the lace manchettes with three rows of ruffles, trimmed with sleeve bows.

Hair in a racine droite, a little raised, with the confident near the ear, and a brush in the opening of the shell.  Medium cap on three oblique curls, with a ribbon placed around the head; a pearl strand below the ribbon-papillon; the lappets hang in the back.

The little girl is dressed in a child's gown** of buras, trimmed with ribbons and a half-apron of striped gauze, and trimmed around the edges, the pocket, and the front/bib; straw hat with ribbons on the back of the head, and cane in hand.

* "écuyers" - the literal meaning is squire or equerry, so I have extrapolated that it might also be used for the gold braid used on an equerry's uniform.
** "un fourreau", not the same thing as a gown en fourreau, but a metaphorical "sheath" for a child. 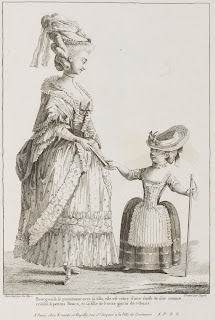