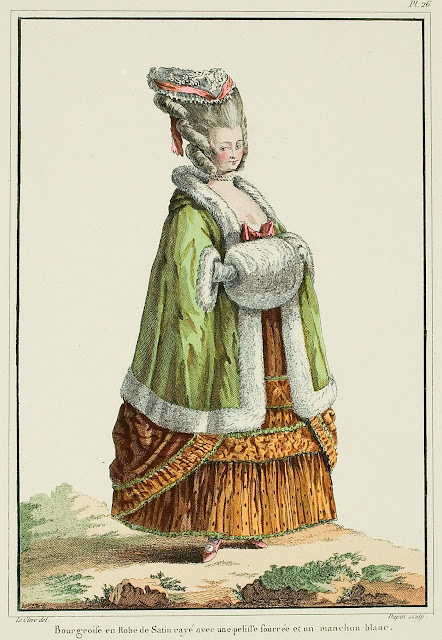 Middle class woman in a striped Satin Gown with a furred pelisse and a white muff. (1778)

The pelisse is a type of winter overcoat that Ladies throw on their shoulders to protect themselves against the rigors of the season.  There are two types, the plain and the furred.  The former are worn by the unimportant middle class; the latter, of higher quality, are likely to be in the most brilliant colors and the most precious furs.  Among them, there are ones that are only bordered, or to use the true terms, only have a "cord"; the body is lined with a light cotton.  The others, without the cord, have a fur lining, but their weight and heat often render them uncomfortable.  The cord covers it all around the edges.  It surrounds the hood and finishes by outlining the pockets, or openings used to pass the arm through. 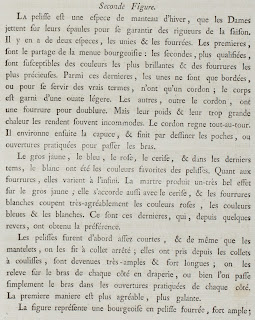 Bright yellow, blue, pink, cerise, and in the second types, white are the favored colors for pelisses.  The furs are infinitely varied.  Sable produces a very nice effect on bright yellow; it also agrees with cerise, and white furs contrast very agreeably with pinks, blues, and whites.  These are the furred versions which, since recent reversions, have become preferred.

Pelisses were first rather short, and like mantelets they had a stopped collar; they since have taken coulisse collars and have become very ample and long; one drapes them back from the arms on each side, or simply passes the arms through the practical openings on each side.  The former is more agreeable and genteel. 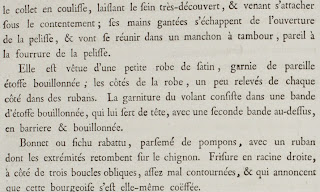 The drawing represents a middle class woman in a very ample furred pelisse with a coulisse collar, leaving the chest very uncovered and fastening under the contentement; her gloved hands escape the openings of the pelisse and come together in a drum-shaped muff, matching the fur of the pelisse.

She is dressed in a satin petite robe, trimmed with the same material, ruched; the sides of the gown are a little pulled up on each sides with ribbons.  The bottom of the petticoat has a band of ruched material in the place of the head of the volant, with a second ruched band below it en barriere.

Cap or folded kerchief, sprinkled with pompoms, with a ribbon whose ends fall on the chignon.  Hair in a racine droite, with three oblique and rather contorted curls on each side, which indicate that this bourgeoise did her own hair. 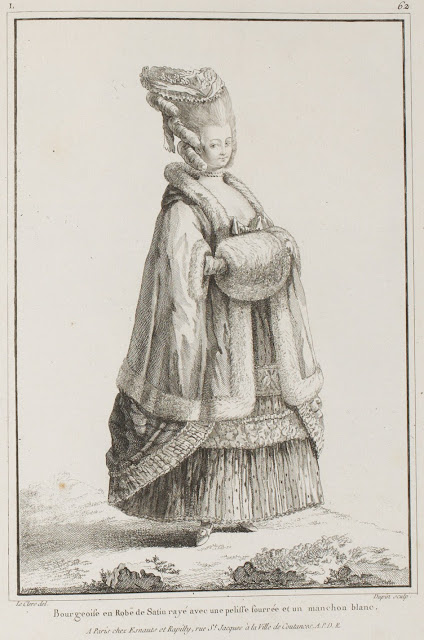