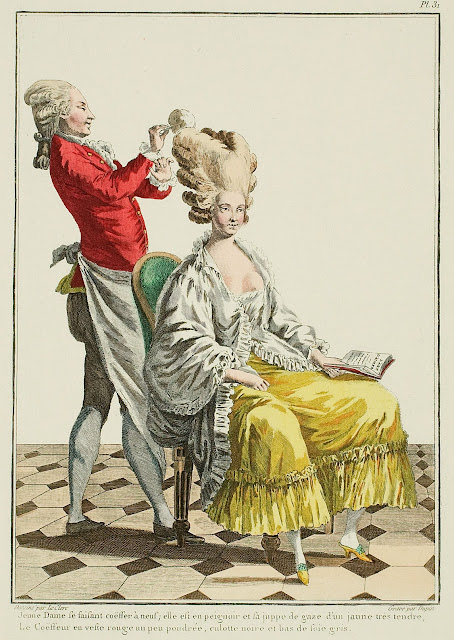 Young Lady getting a new hairstyle; she is in a peignoir and her gauze petticoat of very soft yellow.  The Hairdresser is in a slightly powdered red vest, black breeches, and grey silk stockings. (1778)

The moments devoted to the toilette are regarded as moments of idleness.  It is ordinarily the time when Ladies choose to glance on passing pamphlets- children of leisure, caprice, or need.

The fashion of filling the entr'actes or intermissions of the toilette with reading was introduced first in the homes of the Ladies of quality.  It very quickly gained excessive favor.  Peddlers and booksellers became useful men, and the most superficial pamphlets were able to boast that they had enjoyed at least a few minutes of existence.

All of a sudden this fashion felt a rather singular revolution: the frivolous works were put away.  A pretty woman was believed to wrong her charms if she had not read some treatise on the sciences and the arts: Physics, above all; Chemistry and Natural History had the greatest vogue.  This fashion of wit was succeeded by the fashion of reasoning: one only spoke of morality and metaphysics.  Poor human reason saw itself led to the Tribunal of the fair sex, and the philosophical torch illuminated Ladies' toilettes.  Its monotonous light was very proper to make their graces shine; one pretended that the torch, in the hands of the eighteenth century, was only a dangerous phosphorous.  It perpetuated itself in the home of some virtuous women, but in the homes of other women, the God of foolishness, with one of the bells of Folly, was a pleasure to extinguish.  Since this time, the sheets of periodicals have shared, through the approved pamphlets, the lost moments of Ladies' toilettes. 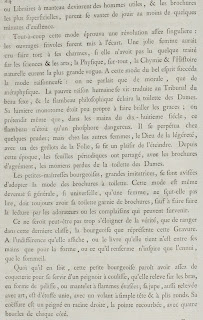 The little-mistresses of the middle class, great imitators, were advised to adopt the fashion of pamphlets at the toilette.  This fashion has even become so general, so universal, that a woman who does not read must always have her toilette scattered with pamphlets, to make readings to her admirers or lackeys that might come up.

It would perhaps not be too far from the truth, that falling in this last class, the middle class is what is represented in this Print.  The indifference she shows, or the book that she only holds between her hands for looks, or that which it contains only inspires boredom and sleep.

Anyway, this little bourgeoise seems to have enough coquetry to make use of a peignoir à coulisse, which she pulls up on the arms in the form of a pelisse or mantelet with flared points; her petticoat, also pulled up with art, is of a plain stuff, with a volant with a simple heading and box pleats.  Her hair is combed in a racine droit, the tip curved, with four curls on each side.

About the hairdresser: he is shown in the costume of his station.  "Lost greek" front hair, two finger curls, a cadogan queue; the rest of his accoutrement is easily guessed.

He holds a brush of swan feathers full of red powder, which he shakes on the head of this little middle-class mistress; to the end that, which nature made brown, she seems in unison with blondes, conforming to the received dress. 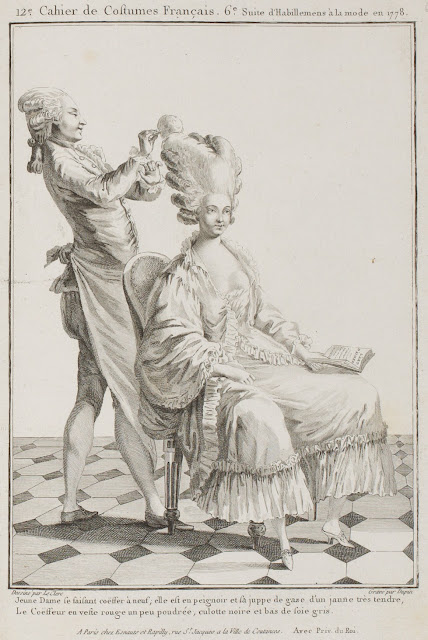