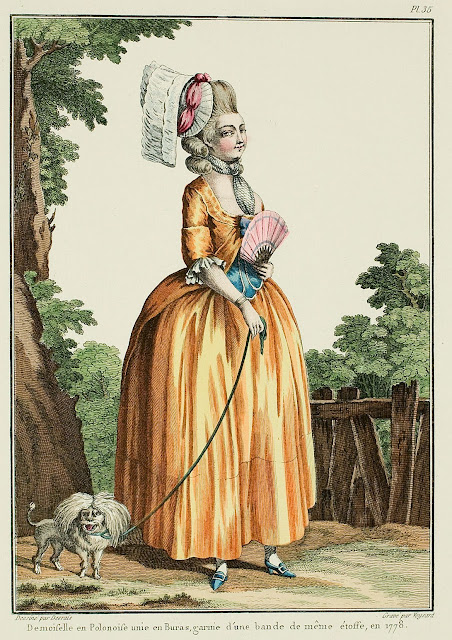 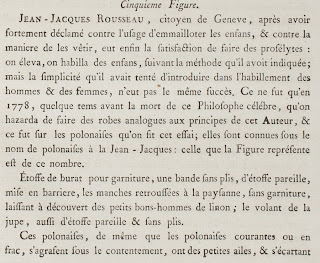 Jean-Jacques Rousseau, citizen of Geneva, after having strongly declaimed against the swaddling of infants and the normal manner of dressing them, at last had the satisfaction of making converts: children were raised and dressed following the method he had indicated; but the simplicity he tried to introduce into men's and women's dress did not have the same success. It was not until 1778, sometime after the death of that celebrated Philosopher, that people hazarded to make gowns along the principals of that Author, and it was with the polonaises that they made this attempt; they were known by the name of "Jean-Jacques" polonaises: the one which the Figure represents is of that type. 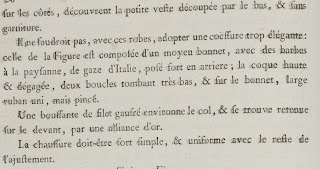 Buras cloth is used for the trimming, an unpleated band of the same material placed en barriere, the sleeves folded up in the peasant style, without trim, showing the little linen bonshommes; the volant of the petticoat is also of matching material and without pleats.

These polonaises, the same as the current polonaises or "frock-coat" polonaises, fasten under the contentement, have little wings, and are spread on the sides, leaving the little scalloped vest uncovered on the bottom, and without trimming.

It would not do, with these gowns, to adopt a too-elegant coiffure: that of the Figure is composed of a medium cap with peasant-style lappets, of Italian gauze, positioned mostly in the back; the coque is high and separate, with two curls falling very low, and on the cap a large but pincé solid-colored ribbon.

A bouffante of goffered filet lace around the neck, and holding in the front a gold alliance.*

The shoe must be very simple, and in accordance with the rest of the outfit. 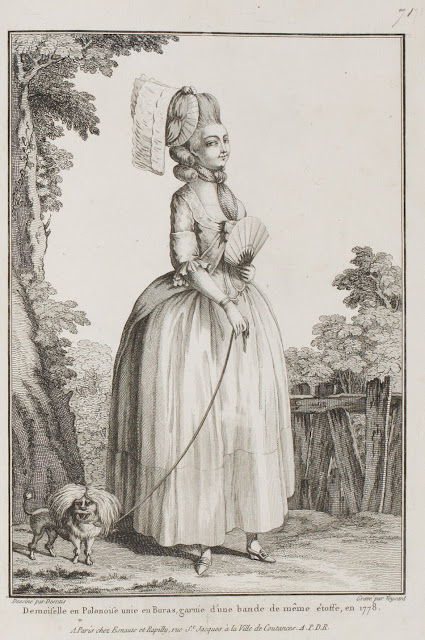