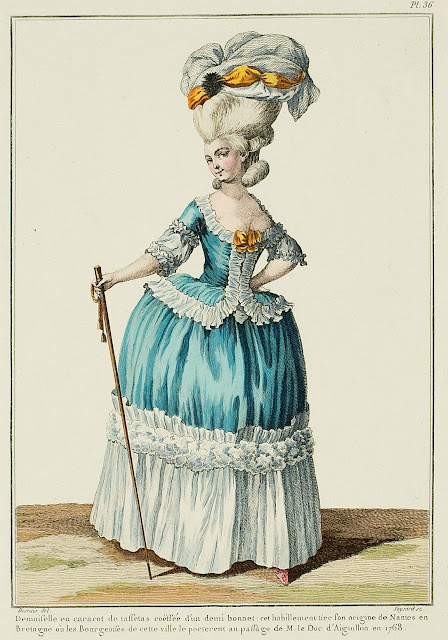 Young lady in a taffeta caraco, coiffed in a demi-cap; this dress derives from Nantes, in Brittany, where the Bourgesoises of the town wore it to the passage of M. the Duke d'Aiguillon in 1768. (1778)

It is said at the bottom of this Print that the caraco derives from Nantes in Brittany, where the bourgeoises wore it at the passage of M. the Duke d'Aiguillon, in 1768.  This revelation is not exact: the caraco is older, but it was only in 1768 that respectable women appeared in public dressed in caracos, and this fashion overall had the greatest favor among the ladies of Nantes, where it was kept for many years. 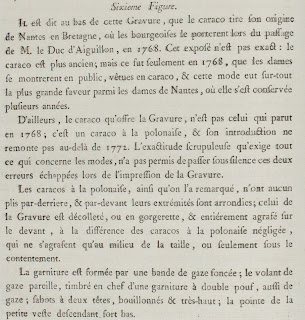 Anyway, the caraco shown in the Print is not that which was worn in 1768; it is a polonaise caraco, and its introduction was not until 1772.  The scrupulous exactitude that is required for everything regarding fashion has not permitted passing under silence the two errors escaping from the impression of the Print.

The trim is formed with a band of gathered gauze; the volant in matching gauze, headed with a double-pouf trim, also of gauze; sabot cuffs with two heads, ruched and very high; the point of the little vest descends very low. 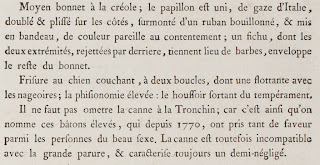 Medium creole cap: the papillon is in one piece of Italian gauze, doubled and pleated on the sides, surmounted by a bouillonné ribbon placed as a bandeau in the same color as the contentement; a kerchief whose ends are thrown out in the back, taking the place of lappets, envelops the rest of the cap.

Hair in a chien couchant with two curls, a hanging one with nageoires; the phisionomie raised; the brush going out of the tempérament.

One must not omit the Tronchin cane,* also known as a high rod, which since 1770 has taken such favor among people of the fair sex.  The cane is always incompatible with the grande parure, and always characterizes demi-négligé dress.

* Probably so called after Théodore Tronchin (1709-1781), a Swiss doctor who advocated for inoculation and hygiene, and against bloodletting and purging. 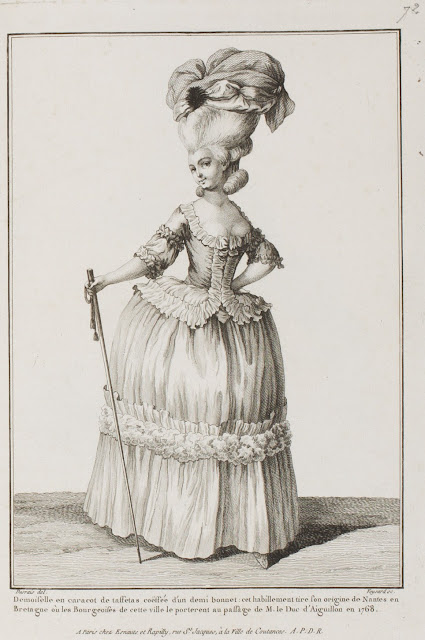