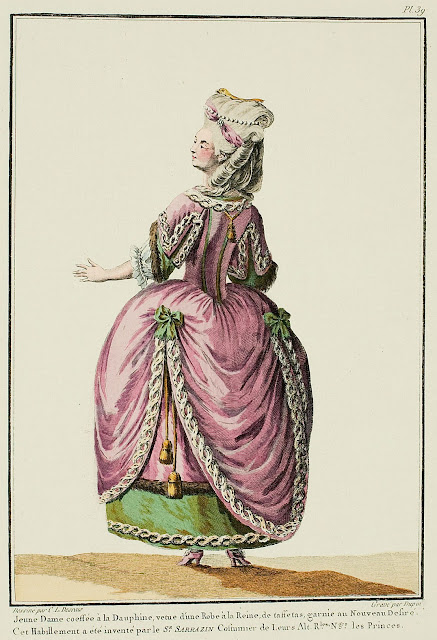 Robe à la Reine: this gown has the double advantage of being able to be worn trailing or pulled up, at the will of the people who are wearing it and at the moment they choose; two drawstrings, placed on two sides, indicated by two bows, and trimmed with two tassels, create this effect; in pulling one tassel, the gown lifts, as it is in the Drawing; in pulling the other, it descends and becomes hanging; this change is made in an instant. 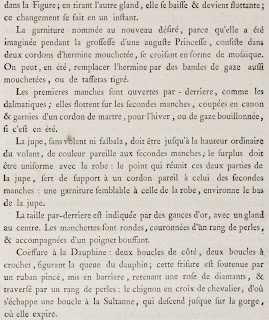 The trim, called au nouveau désiré* because it was devised during the pregnancy of a majestic Princess, consists of two bands of spotted ermine, crossing in a mosaic form.  One can, in the summer, replace the ermine with bands of gauze, also spotted, or streaked taffeta.

The first sleeves are open in the back like dalmatics; they hang over the second sleeves, cut en canon and trimmed with a sable band for winter, or ruched gauze for summer.

The shape in the back is indicated by gold braid, with a tassel at the center.  The manchettes are round, topped with a row of pearls and accompanied with a puffed undersleeve.

Hair à la Dauphine: two curls on the side, two curls en crochet,* holding a dolphin's tail; this hairstyle is surmounted with a pinched ribbon placed en barriere, holding a diamond rose and crossed by a row of pearls.  The chignon is in a knight's cross, from which escapes a curl à la Sultaine which descends to the throat, where it ends.

* "to the new desire"
** from the architectural sense, in which a crochet was a motif of a scroll, curled at one end 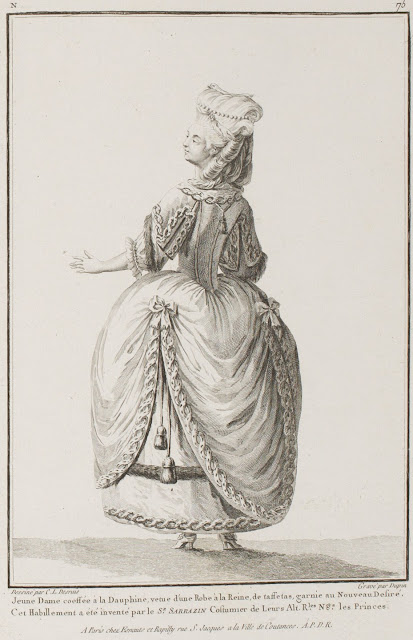