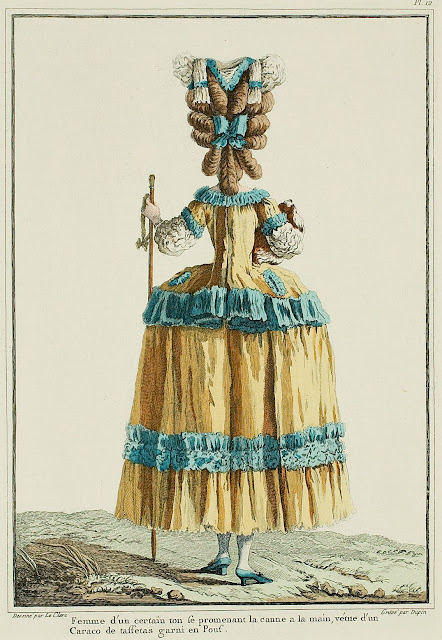 Woman of a certain class walking with a cane in her hand, dressed in a taffeta Caraco trimmed with Poufs. (1778)

The Caraco is only the robe à la Française or open gown with the bottom removed, leaving the bodice or upper part: that convenience gives it the greatest credit; but despite the efforts of its protectors, who have tried to bring it out in public and make it negligée dress, it is forced to remain in the class of undress. 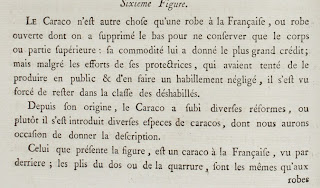 Since it was created, the Caraco has sustained diverse changes, or rather, various types of caracos have been introduced, of which we have an opportunity to give descriptions.

The one shown in the plate is a caraco à la Française, seen from behind; the back pleats, or the back itself, are the same as on the robes à la Françaises.  This garment was at first only trimmed on the front and around the throat, but little by little the trim was extended around the hem.  The first caracos were worn very long; this old form was lost several years ago, and they should end at the opening of the pocket slits in the petticoat.  After the sleeves were ended with pinked manchettes, they were put in sabot cuffs with little bonshommes, and this is their current form. 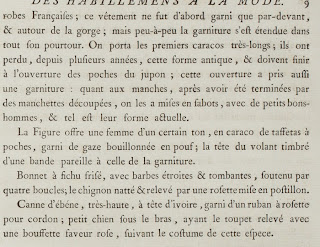 The Plate shows a woman of a certain class, in a taffeta caraco with pockets, trimmed with ruched gauze in poufs; the top of the volante is headed with a band like the trim of the caraco.

"Gathered kerchief" cap with narrow, hanging lappets, on top of four curls; the braided chignon held up with a bow in the back.

Ebony cane, very tall, with an ivory head, with a ribbon in a bow for the strap; little dog under her arm, having a pink ribbon holding up a tuft of hair, following the costume shown here. 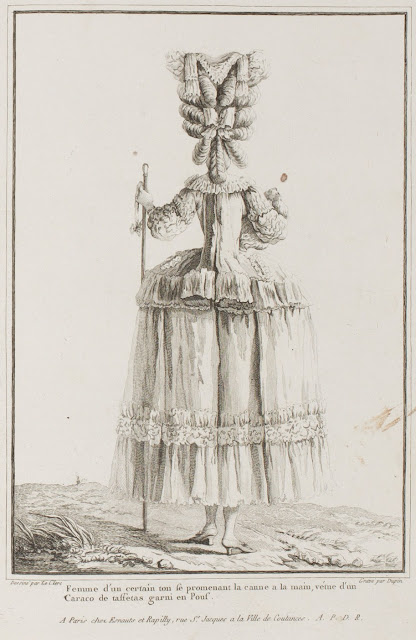