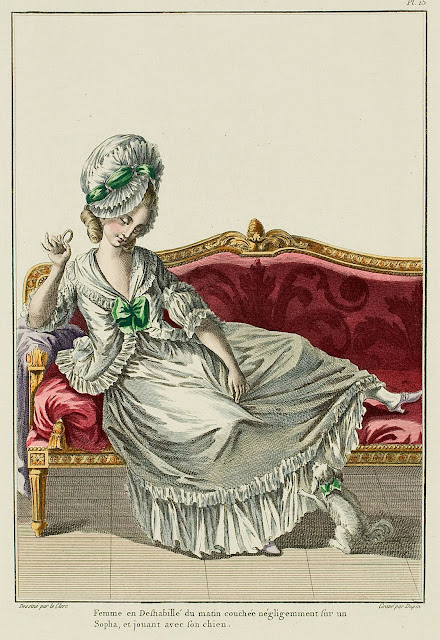 Woman in morning Undress lying negligently on a Sofa, playing with her dog. (1778)

Caraco à la Polonaise; it must be well-made to serve.  It can be given a hood but though that hides the irregularities of the shoulders, it also loses the garment's lightness, which is its principal merit. 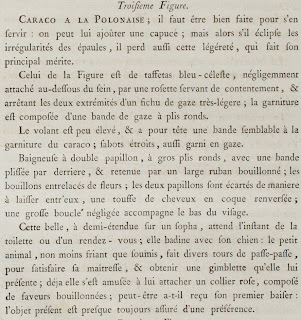 The one in this Drawing is of sky-blue taffeta, negligently held in front of the chest with a bow that serves as the contentement, and also holds the two ends of a kerchief of very light gauze.  The trimming is composed of a band of gauze in box pleats.

The volant is a little raised, and at the top is a band like the trim on the caraco; narrow sabot cuffs, also trimmed with gauze.

Baigneuse* à double papillon, in large box pleats, with a pleated band behind the ruffles held in with a large bouillonné ribbon; the bouillons interlaced with flowers; the two papillons outspread in such a way as to leave between them a tuft of hair in a reversed coque; a large négligée curl hangs next to the lower part of the face.

This beauty, half-stretched on the sofa, waits for the moment of her toilette or a romantic meeting; she plays with her dog: the little animal, no less dainty than it is submissive, performs diverse tricks to satisfy his mistress and get a giblet that she is holding.  Already she has had fun attaching a pink collar made of bouilloné ribbons; maybe it has received its first kiss: it is almost always assured of a preference.

* The baigneuse was derived from a bathing cap. 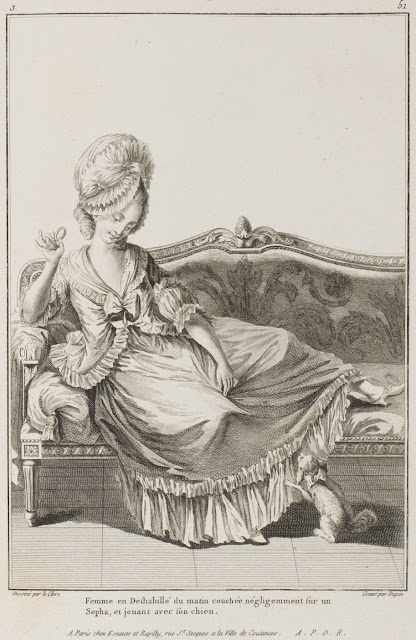