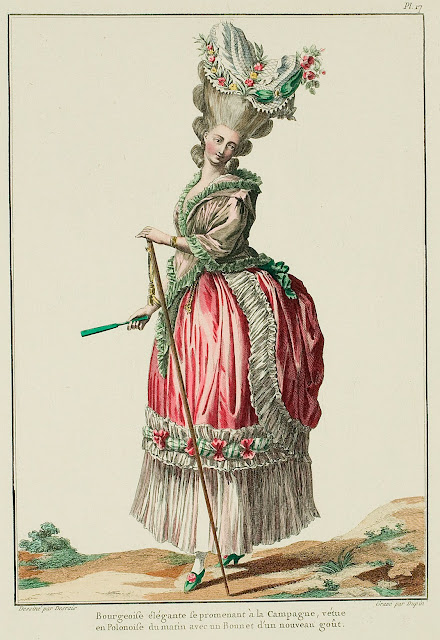 Elegant bourgeoise walking in the Country, dressed in a morning Polonaise with a Cap in the new taste. (1778)

The Mantelet is a type of little overcoat or light drapery, intended to cover the upper part of the body; it is kept out of the formal parure, but it has become so favored that one is accustomed to see it as an essential part of Ladies' clothing.

Taffeta in summer and satin in winter are the two main materials that are employed in mantelets: black lace mantelets are worn, but they are fallen into discredit and have been relegated to the provinces.  Mantelets of white lace, and of solid or embroidered Indian muslin, and lined with pink, have likewise been in vogue; they are still in style, but they do not go with all outfits, so they will be remarked on later. 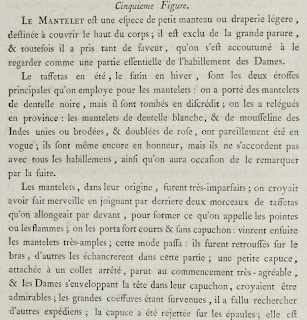 Mantelets, when they were invented, were very imperfect: it was thought marvelous to join two pieces of taffeta in the back that were stretched from the front, to form what are called the "points" or the "flames"; they were worn very short and without a hood.  Then came the very ample mantelets; this fashion passed.  They were pulled up over the arms, others had indentations cut into that area.  A little hood, attached to a stopped collar,* seemed a very agreeable development, and the Ladies covered their heads with their hoods, believing themselves admirable.  The large coiffures coming on, it was necessary to look for other expedients: the hood was put back on the shoulders, and became a simple ornament, and théreses and calashes were substituted.  The raised collars were also found to be only convenient to the precieuses;** coulisse collars were made, and the hoods, obliged to conform to the fashion, took on an excessive size without being more useful.  Finally, the introduction of the polonaises brought the mantelets with tapered or flared points: this is the last change that came to this part of French Ladies' dress.

The Print shows a young bourgeoise, walking on her Doctor's orders; she is dressed in a morning polonaise, or demi-polonaise, composed of two wings and a tail, trimmed with gauze in large bands and box pleats, having a heading trim. 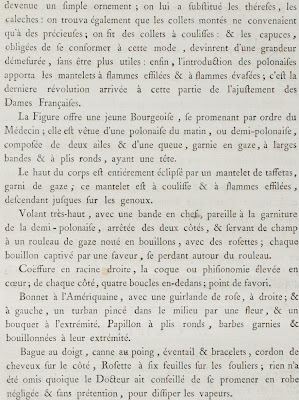 The top of the body is entirely covered with a taffeta mantelet, trimmed with gauze; it is a mantelet à coulisse with tapered points, descending almost to the knees.

Very high volant, with a band on the top similar to the trim on the demi-polonaise, ending at the sides, serving as a field for a roll of gauze tied in bouillons with bows; each bouillon held by a ribbon, losing itself around the roll.

Hair in a racine droite, the coque or phisionomie raised in a heart; each side in four curls; no favori.

American cap with a rose garland on the right, and on the left, a sash pinched in the middle by a flower, and a bouquet at the end.  Box-pleated papillon, trimmed lappets that are bouillonné at the end.

Ring on her finger, cane in her fist, fans and bracelets, hair cord at her side, bow with six loops on the shoes; nothing was omitted, as the Doctor advised her to walk in negligée dress, without pretension, to dissipate the vapors.

* I believe this refers to a collar that is a separate piece of fabric, to which the hood and body are pleated (such as the one patterned in Costume Close-Up); a mantelet à coulisse would probably have the hood and body attached unpleated, with a channel for a drawstring between them.

** Originally, witty intellectual women who participated in salons; in the 1650s, Moliere wrote a play satirizing their affectations, Les precieuses ridicules, and it took on a derogatory meaning. 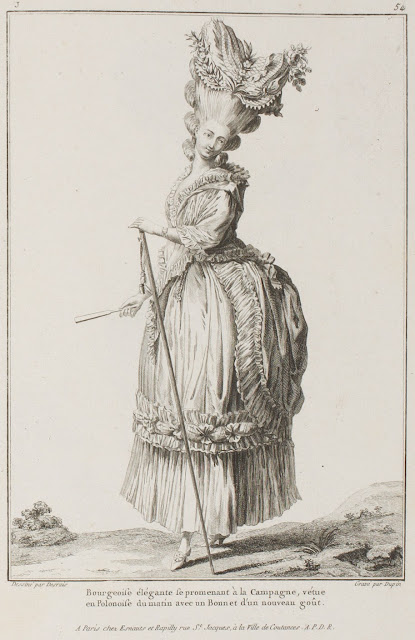