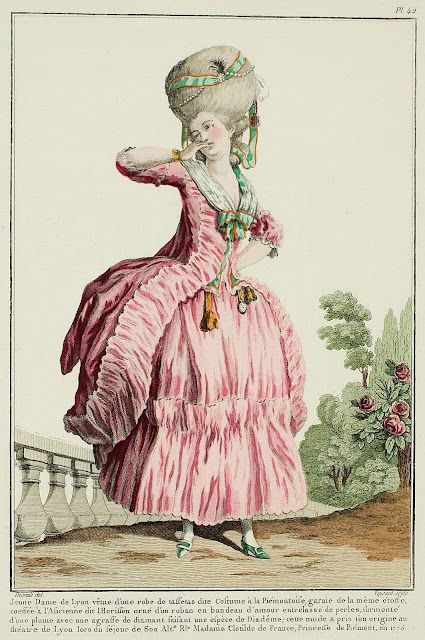 Young Lady of Lyon dressed in a taffeta gown called Costume à la Piémontoise, trimmed with the same stuff.  Coiffed à l'Asirienne called the Herisson, trimmed with a ribbon in a band-of-love interlaced with pearls, surmounted by a plume with a diamond fastening creating a type of Diadem.  This fashion was originally taken from the theatre of Lyon during the journey of Her Royal Highness Madame Clotilde of France, Princess of Piedmont, in 1775. (1778)

Robe à la Piémontaise: these gowns have pleats in the back, like the robes à la Française, but these pleats are applied after cutting, like the skirts of a gown, and form a type of cape, which attaches in the back at the top of the collar; this mantua is left to hang.  Sometimes the Ladies cover the body or pull it up under the arms with much grace. 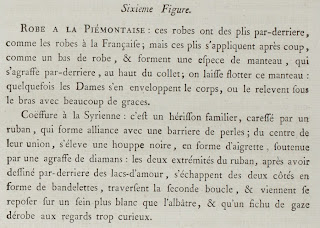 Coiffure à la Syrienne: it is a usual herisson, caressed by a ribbon which forms an alliance with a barriere or pearls; at the center of their meeting point a black brush, in the shape of an aigrette, pulls it up and is supported by a diamond fastening.  The two ends of the ribbon, after having designated the love-locks in the back, escape at the two sides in streamers, cross the second curl, and come to rest on a breast as white as an albatross, which a gauze kerchief screens from curious looks. 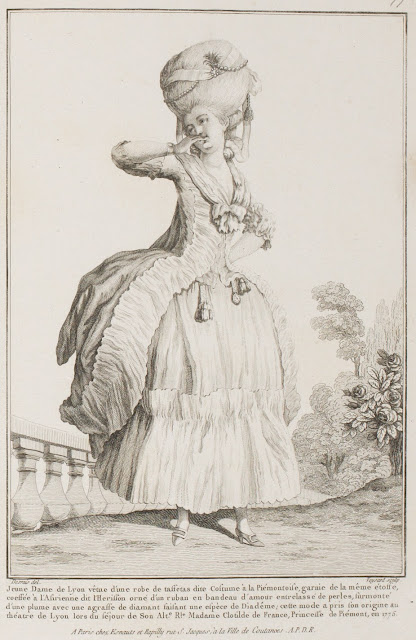