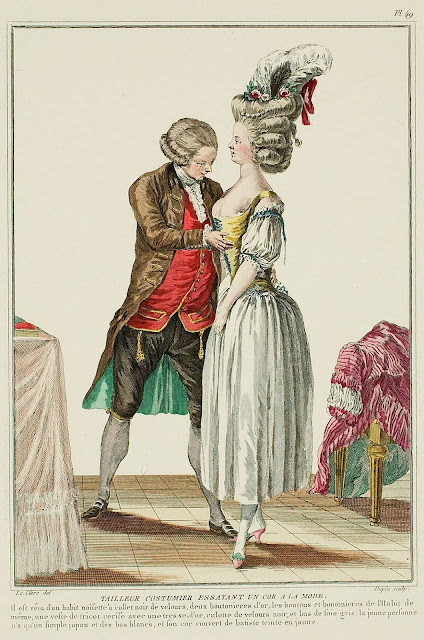 TAILOR TRYING A FASHIONABLE BODY
He is dressed in a hazel coat with a black velvet collar with two gold buttonholes, the buttons and buttonholes of the Suit are the same; a vest of cerise tricot with a gold braid; breeches of black velvet, grey silk stockings.  The young person has only a simple petticoat and white stockings, and her stays are covered with yellow batiste. (1778)

It is not enough to present the exteriors of clothing, it is important to make known the interior pieces: often it is these which make the prestige of the fashions, and the more they are hidden, the more interesting they are to uncover.  It is that which has been attempted in this Print. 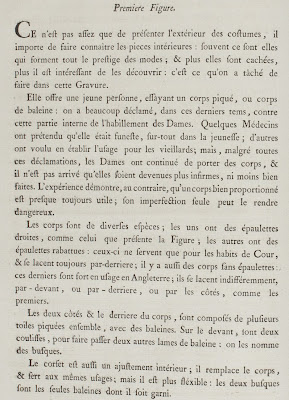 It offers a young person, trying on a corps piqué, or corps de baleine:* people have complained much, these days, against this interior part of Ladies' dress.  Some Doctors have alleged that it is disastrous, especially for the young; others have wanted to to establish its use among old men; but despite all these complaints, Ladies continued to wear stays, and they have not become weaker, nor less well-made.  Experience demonstrates, to the contrary, that well-proportioned stays are nearly always useful; its only imperfection can make it dangerous.

Stays are of diverse types; some have straight straps, like that shown in the Drawing; others have off-the-shoulder straps: these only serve for Court dress, and always lace in the back.  There are also stays without straps, these are heavily used in England; they lace in the front or the back, or on the sides, like the first.

The two sides and the back of the stays are composed of several fabrics sewn together, with whalebone.  On the front, there are two channels to pass two other whalebone stays through: these are called the busks.

The corset is also an interior fitted garment; it replaces the stays and serves the same use, but it is more flexible: the two busks are the only whalebones in it.

The stays offered in the Print are a corps à la Française, laced in the back, with aiglets on two sides to hold petticoats, and a little lace on the front to give the chest the necessary space for breathing.

This fitted garment is placed immediately on the shift, and it is to it only that women derive their torsos' rounded shape, pointed at the bottom; a unique shape, and which always, before marriage, can be regarded as one of the distinctive attributes of honor.

* According to Heileen and Diderot, the corps piqué is a set of stays where the channels are visible, while the corps de baleine (or corps baleiné, or corps couvert) is covered with an unpierced outer layer of fabric. 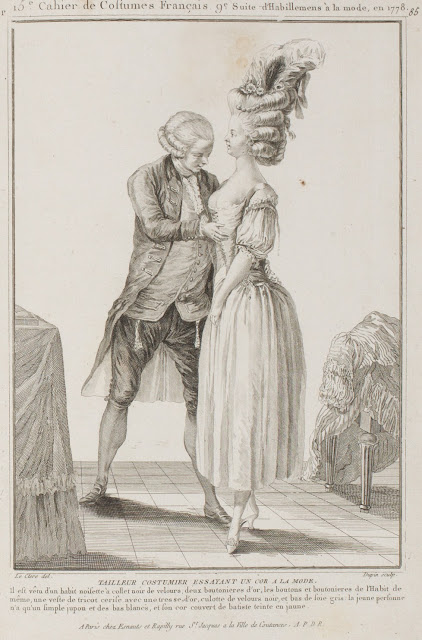