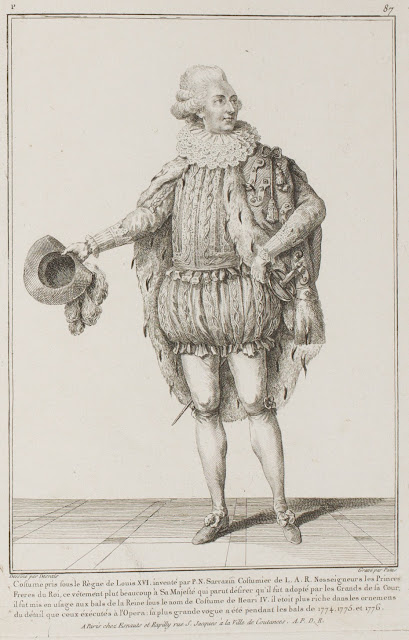 Costume taken in the reign of Louis XVI, invented by P. N. Sarrazin, Costumer to Their Royal Highnesses the Princes who are Brothers to the King.  This outfit pleases His Majesty, who appeared to want it to be adopted by the Grands of his Court.  It was taken in use for the Queen's balls under the name "Henri IV's Costume."  It was very richly ornamented in the detail of those made for the Opera.  Its greatest vogue was during the balls of 1774, 1775, and 1776. (1778)

Costume in the style of Henri IV.  France, at the accession of Louis XVI, hoped that it would enjoy a happy reign; the people gave themselves over to transports of the most lively and purest joy; they believed they could not better show their love and hope, exclaiming that good King Henry delivered it.  The young Monarch seemed, in effect, in all his approaches, to be taking that Prince for a model; he did not lack in the resemblance, but to return to the clothing of that King, who, using the expression of the greatest Genius of our century, was to the French conqueror and father.* 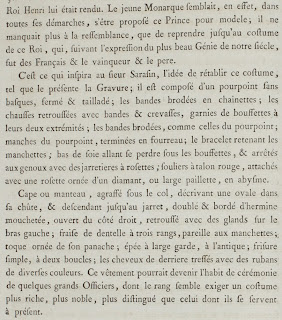 It is that which gave M. Sarrazin the idea to re-establish this costume as is presented in the Print.  It is composed of a doublet without basques, closed and slashed; the bands embroidered in chains.  The trunk hose pulled up with bands and slashes, trimmed with ruffles at both ends; the embroidered bands, like those of the doublet.  Doublet sleeves ending in knife pleats; the cuff retaining its manchettes.  Silk stockings ending under the ruffles and stopping at the knees with garters tied in bows.  Shoes with red heels, attached with a rosette with a diamond or large sequin in the center.

Cape, fastened under the collar, creating an oval in its fall and descending to the back of the knee, lined and bordered with spotted ermine, open on the right side, pulled up with tassels over the left arm.  Lace ruff in three rows, matching the manchettes.  Hat trimmed with its panache; sword with a large guard in the antique style; simple hairstyle with two curls; hair in the back tied with ribbons of several colors.  This dress could become the ceremonial dress of several grand Officers, whose rank seems to demand a richer, nobler, more distinguished costume than that which serves them at present.