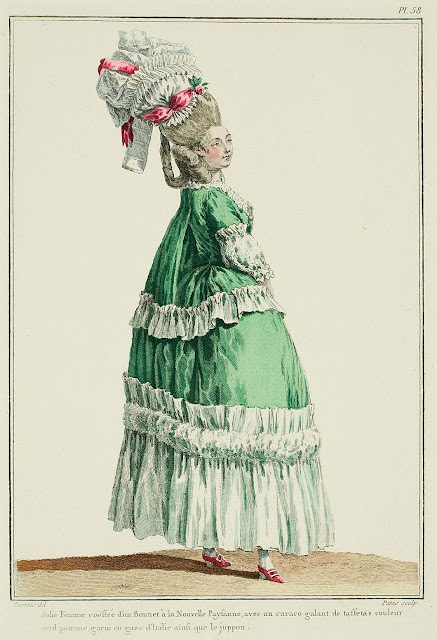 Pretty Woman, coiffed with a New Peasant Cap, with an excellent caraco of apple-green taffeta,
trimmed with Italian gauze, also on the petticoat. (1778)

Caraco à la Francaise, seen from the side, with a matching petticoat over a very rounded bouffante.  The trim of Italian gauze; the sabot cuffs very ample and frilled at their ends.  Large volant equipped with a large band of gauze placed en pouf. 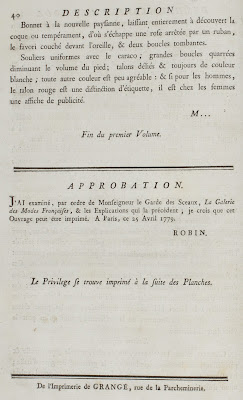 Cap in the new peasant style, leaving the coque or tempérament entirely uncovered, from which escapes a rose held by a ribbon, the favori lying in front of the ear, and two falling curls.

Shoes matching the caraco; large square buckles diminishing the size of the foot; agile heels, always of white, as any other other color is less agreeable: for the men, the red heel is a distinction of etiquette, but it is an advertisement for women.

End of the First Volume

I have examined, by order of Monseigneur the Guard of Seals, La Galerie des Modes Françaises, and the Explanations that precede it; I believe that this Work can be printed.  From Paris, this 25th of April 1779.  ROBIN

The Privilege finds it printed at the suite of Plates. 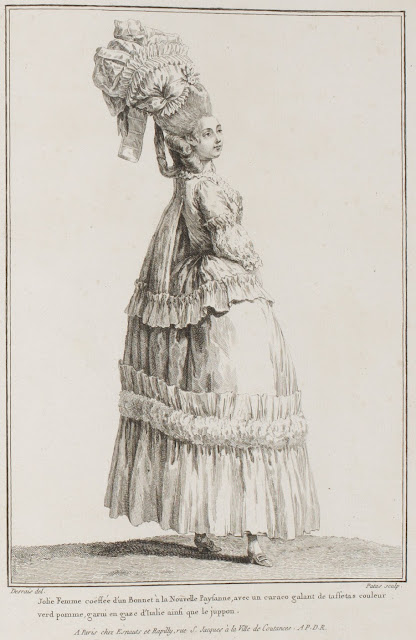