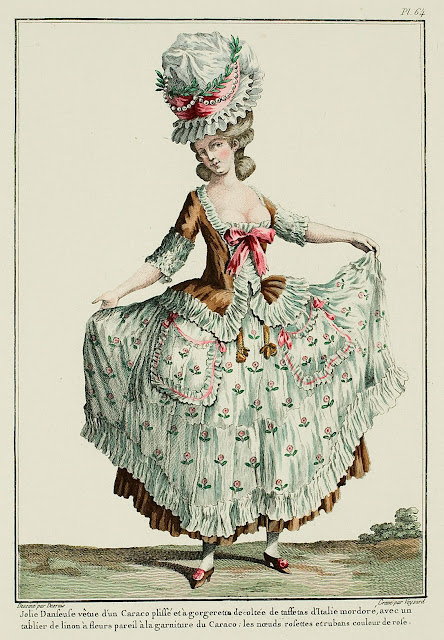 Pretty Dancer dressed in a pleated Caraco with a low-cut gorgerette of bronze Italian taffeta, with a flowered linen apron matching the trim of the Caraco; the bows and ribbons are pink. (1779)

Winter is the season of pleasures, and dance makes one of the principal amusements of society, over-all for the young people of both sexes.  It can be given more piquancy when it is introduced without preparation and impromptu.  The attractive pleasures are those on which one doesn't wait.  It is that which has happened to the pretty Dancer presented in the Print.  Confined with her mother, decided not to go out, and to isolate herself in front of the fire, because of the rigors of the fresh air, she was dressed in deshabillé, until a brilliant Youth arose and forced her to free herself from the amusements of the season.

Although surprised, she was not less elegant.  Her pleated caraco, or caraco à la Française, is trimmed with a large band of linen, with a matching petticoat trimmed with an ample volant, and over it an apron, also of flowered linen, with trimmed and drawstringed pockets.  Two gold cords of different colors designate the watches.  The basques of the caraco broach over the apron.  Ribbon bow placed on the chest, and serving to support the two hemispheres of tender Love.  Pouf hat with a bandeau, accompanied by a garland of pearls, and crowned with a branch of frivolity. 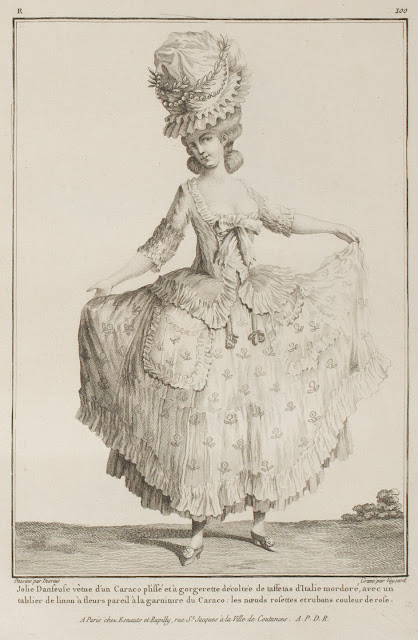