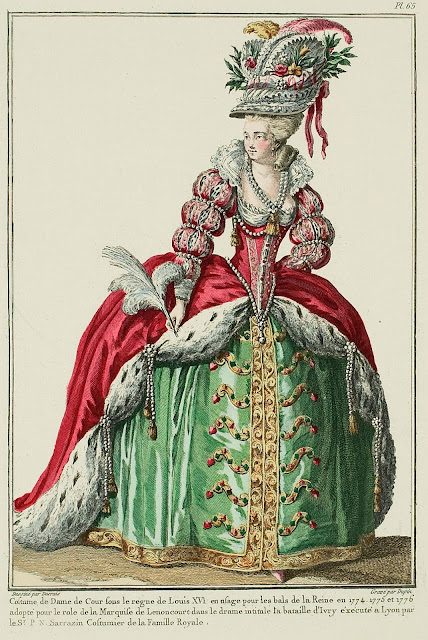 Costume of a Lady of the Court during the reign of Louis XVI, in use for the Queen's balls in 1774, 1775, and 1776, adopted for the role of the Marquise de Lenoncourt in the drama called "the Battle of Ivry", executed in Lyon by Sr. P. N. Sarrazin, Costumer of the Royal Family. (1779) 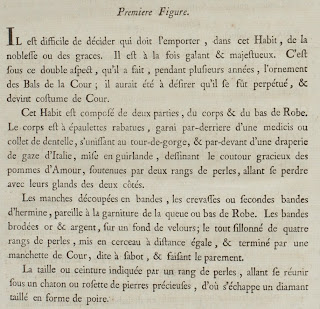 It is difficult to decide which must prevail in this Dress, nobility or grace.  It is of a gallant and majestic time.  It is in this double aspect that it was the ornament of the Court Balls for several years; it would have been desired to exist in perpetuity and become the Court dress.

This Dress is composed of two parts, the body and the skirt of the Gown.  The body has folded shoulders, trimmed in the back with a medicis or lace collar, coming together around the throat, and in the front with an Italian gauze drapery, placed as a garland, outlining the graceful shape of the apples of Love.  Two rows of pearls over the gauze, ending with tassels at the two sides.

The sleeves are slashed in bands, the crevasses or second bands of ermine, matching the trim of the tail or skirt of the Gown.  The bands are embroidered with gold and silver, on a velvet ground; the whole crossed with four rows of pearl, placed in circles equal distances apart, and ending with a Court manchette, called a sabot cuff, which creates a parement. 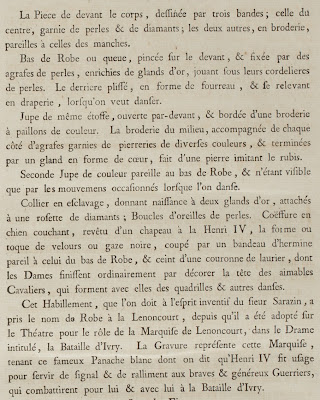 The waist or belt is indicated by a row of pearls, uniting under a gem or rosette of precious stones, from which escapes a pear-cut diamond.

The front Piece of the body, outlined with three bands: the center one is trimmed with pearls and diamonds, the other two are embroidered to match the sleeves.

Skirt of the Gown, or tail, is pinched up in the front and held with pearl fastenings with gold tassels dangling from the cordelières of pearls.*  The back is pleated en fourreau, and is pulled up in drapery when one wants to dance.

Petticoat of the same stuff, open in the front and edged with embroidery in colored spangles.  The embroidery of the middle, accompanied on each side with fastenings trimmed with precious stones of many colors, and ending with a heart-shaped "acorn", made of an imitation ruby stone.

Second Petticoat in a color matching the skirt of the gown, only being visible because of the movements occasioned while dancing.

Slave's necklace, giving birth to two gold tassels, attached with a diamond rosette; pearl earrings.  Hair en chien couchant, clad with a Henri IV hat, the crown or toque of velvet or black gauze, cut by an ermine band matching that on the Gown's skirt, and girded by a laurel wreath, which Women ordinarily use to decorate the heads of amiable Cavaliers who form quadrilles and other dances with them.

This Dress, which must be from the inventive spirit of Sir Sarazin, took the name of Robe à la Lenoncourt, since it was adopted in the Theatre for the role of the Marquise de Lenoncourt, in the Drama called "the Battle of Ivry".  The Print represents this Marquise, holding the famous white Panache which Henri IV used to signal and rally the brave and generous Warriors, which fought for him and with him at the Battle of Ivry.**

* A cordelière is a cord with several tassels used in ecclesiastical vestments.
** The Battle of Ivry was one of Henri IV and the Huguenot's victories in fighting against the Catholics in the War of the Three Henrys; of course, to become king he converted, saying that "Paris is worth a mass".  Henri IV was extremely popular during his reign and after, inspiring many fashions during Louis XVI's - in an earlier plate, it was recommended that costume in the style of his time become adopted in court. 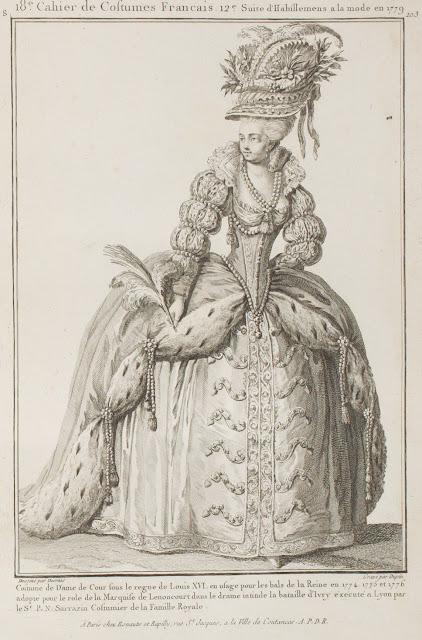