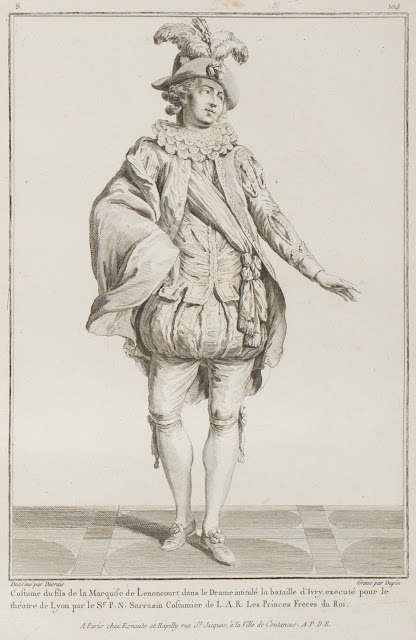 Costume of the son of the Marquise de Lenoncourt in the Drama titled, "The Battle of Ivry", made for the theater of Lyon by Sr. P. N. Sarrazin, Costumer to Their Royal Highnesses the Princes, the Brothers of the King. (1779) 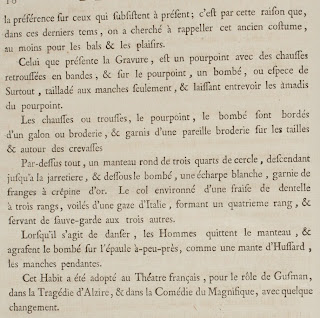 Men, despite their efforts, have a difficult time procuring for their Dress the elegance that characterizes those of Women, unless they adopt the long Suit; but that garment is so uncomfortable that one must presume that Frenchmen will not become used to it for a long time.  Meanwhile, court Dress dominates, and that which was fashionable around the end of the sixteenth century seems to have obtained the preference over those which subsist at present; it is for that reason that, in these latter times, one has sought to recall that ancient costume, at least for balls and pleasures.

The one that is presented in the Print is a doublet with breeches pulled up in bands, and over the doublet, a bombé or type of Overcoat, cut only at the sleeves, and allowing the amadis of the doublet to be seen.

The breeches or trews, the doublet, and the bombé are bordered with a braid or embroidery, and trimmed with a matching embroidery on the tabs and around the slashes.

Over all, a round, 3/4 circle cape, descending to the garters, and under the bombé, a which scarf trimmed with a fringe of gold mesh.  The collar is surrounded by a three-layered frill of lace, veiled with Italian gauze that forms a fourth row and serves to protect the other three.

When going to dance, Men take off the cape and fasten the bombé somewhere around the shoulder, like a Hussard's mantle, with the sleeves hanging.

This Suit was adopted in the French Theater for the role of Gufman, in the Tragedy of Alzire, and in the Comedy of the Magnificent, with some change.