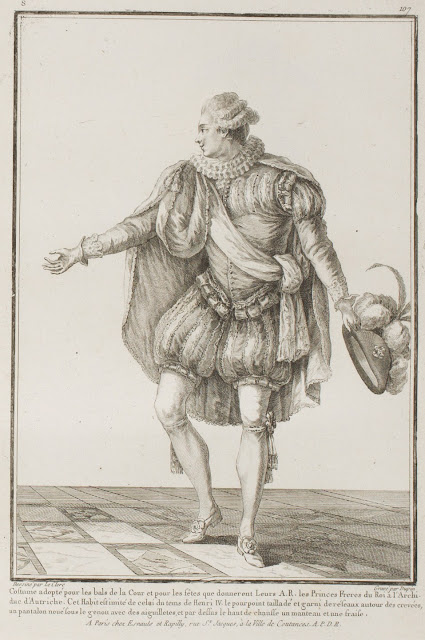 Costume adopted for the Court balls and the parties given by Their Royal Highnesses the Princes, the Brothers of the King, for the Archduke of Austria.  This suit is in imitation of those from the time of Henri IV.  The slashed doublet is trimmed with réseaux around the slashes.  Pantaloons knotted under the knee with aglets.  Coming below the high-breeches, a cape and a ruff. (1779) 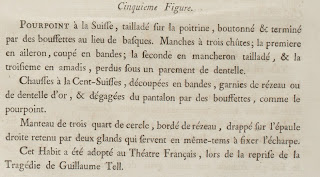 Swiss doublet, slashed on the chest, buttoned and ending with loops instead of basques.  Sleeves in three sections: the first as a wing, cut in bands; the second as a slashed mancheron; the third en amadis, ending under a lace parement.

Swiss Guard breeches, cut in bands, trimmed with réseaux or gold lace and separated from the pantaloons by loops like the doublet.

Three-quarter circle cape, edged with réseaux, draped over the right shoulder and held with two tassels that serve to hold the scarf at the same time.

This Suit was adopted by the Théatre Français when the Tragedy of William Tell was reprised.
1770s 18th century Galerie des Modes gentlemen