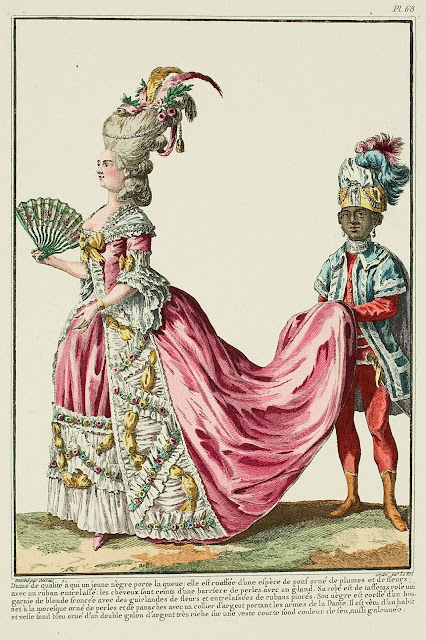 Lady of quality whose tail is carried by a young black boy.  She is coiffed with a type of pouf decorated with plumes and flowers, with a ribbon interlaced among them; the hair is girded with a barrière of pearls with a tassel.  Her gown is of plain pink taffeta, trimmed with gathered bands of blonde lace with flower garlands, interlaced with pinched ribbons.  The black boy is coiffed with a Moorish cap, decorated with pearls and panaches, with a silver collar bearing the Lady's arms.  He is dressed in a suit and vest with a blue ground, decorated with a very rich double silver braid, over a short vest with a fire-colored ground, also trimmed with braid. (1779) 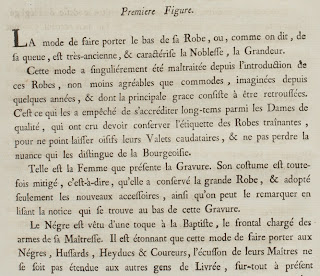 The fashion of having someone carry the skirt of the Gown, or, as it is called, the tail, is very ancient and characterizes Nobility and Grandeur.

This fashion has been singularly mistreated since the introduction of those Gowns, no less agreeable than comfortable, which were imagined several years ago and whose principal grace consists in being rétroussée.  It is that which prevents them from being accredited for long among the Ladies of quality, who must preserve the etiquette of trained Gowns in order to keep their train-bearing Valets from becoming inactive, and cannot lose the nuance that separates them from the Bourgeoises.

Such is the Woman presented in the Print.  Her dress is somewhat mitigated, as they say, because she has kept the grande Robe and only adopted the new accessories, as can be noted in reading the caption found at the bottom of the Print.

The Black boy is dressed in a toque à la Baptiste, the front emblazoned with the arms of his Mistress.  It is astonishing that this fashion of Blacks, Hussards, Heyducs, and Couriers* wearing the escutcheon of their Masters does not extend to other Liveried servants, especially those at present that take matching Suits.  It will be desired that each domestic have on the parement of their sleeves, the arms or chiffre** of his Master; that will be an honorable and polite distinction which could only produce salutary effects.

But we return to the Black boy in the Print: he is dressed in a caftan or bombé à la Chartres, equipped with a large, turn-down collar, and under this a vest and Hungarian pantalon, with marocain boots.  Pierced ears with pearl earrings; a silver circlet for a collar, in the manner of slaves. 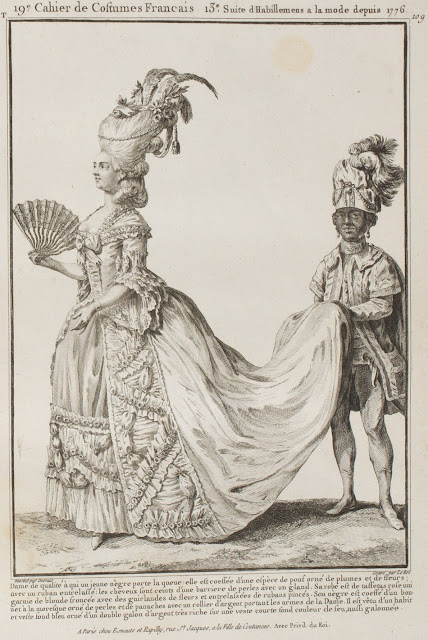