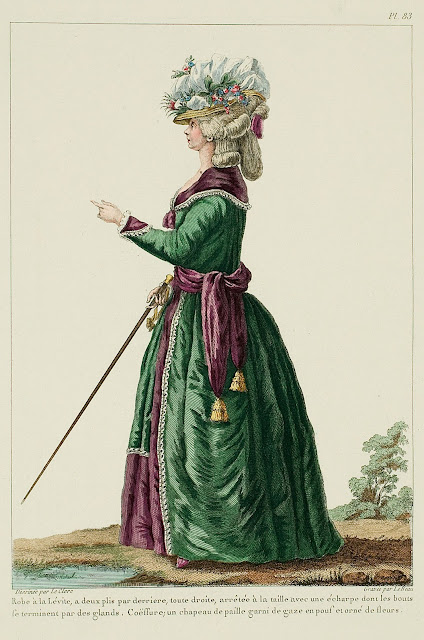 Levite, with two pleats in the back, regular, stopped at the waist with a scarf that ends in tassels.  Coiffure: a straw hat trimmed with gauze en pouf, trimmed with flowers. (1779) ROBE A LA LÉVITE.  This is again one of the noble Gowns that the desire to ban constraint all in clothes caused to be adopted: the first idea for it is due to the Outfits created for the Actresses of the Théatre Française, when it put on the Tragedy of Athalie, with the Chorus.  These Clothes, modeled on those of the Levites and the Priests, consisted of a type of Aube, with a stole which crossed it in front.  This costume was entrenched in those worn by Priests; the stole changed into a belt, and soon it became a fashionable Dress.

Such were the first Levites; they were worn first plain, without panniers or bouffantes; but with time, they were stripped of this original simplicity, such that one will have occasion to notice it thereafter.  To the notice which is found at the bottom of the Print, being sufficient to give an idea of the costume, we add only a word on the shoe, that the position of the Figure doesn't permit to be shown entirely.  It is a shoe à la Lévite; it has neither buckles, nor rosettes, and attaches with a gance, which is tied under a parement folded back over the foot, and which has the same shape and color as the sleeve parement, thus the shoe matches the Gown. 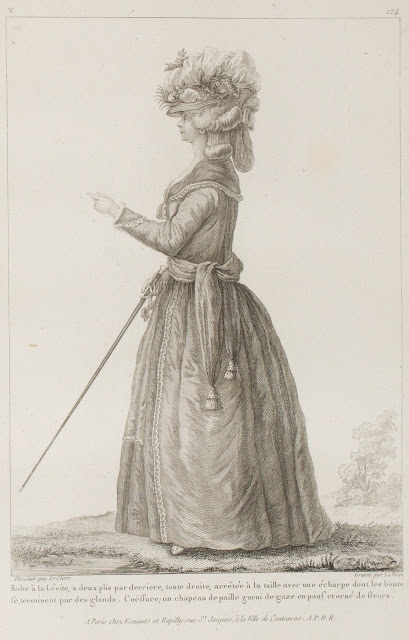