December 10, 2012
Because I have the fashion plates to post, I don't really think to update very often about my life, my sewing projects, etc.  But stuff does happen in those areas!

- I went out with the Empire State Costumers to the Victorian Stroll in Troy last Sunday (not in costume, but everyone else was, and they looked great!), and then to Linda Baumgarten's talk on the history of quilting at the Albany Institute.  I got to meet her, it was so cool!

- I'm having a few weeks off from working at the Chapman, because it made sense for me to wait until the exhibition space could be emptied and then filled with the objects in the storage unit, as I've put numbers on everything else and if I stayed until then the grant would nearly run out while I did less necessary things.  Don't feel sorry for me, it was my idea!

- The 1771 L'Art de la Lingere, by M. de Garsault, was shamelessly dangled in front of me and now I'm trying to translate that as well as the Galerie des Modes.  Once I'm done I'm going to post it all, but for now I'll give you a teaser: the list given of all the items supplied by a Lingere (one who makes linens) for a wealthy woman's trousseau.  The garments that are farmed out to seamstresses are marked with an asterisk. 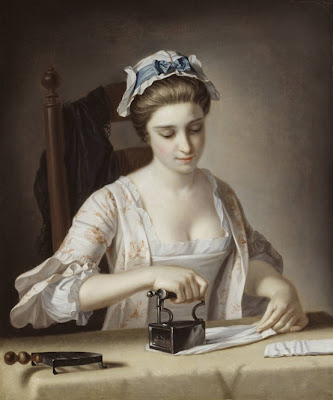 
STATE OF A TROUSSEAU