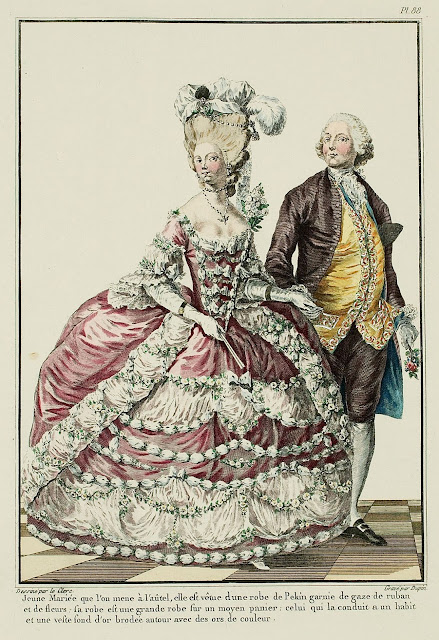 Young Wife, as she is led to the altar; she is dressed in a gown of Pekin* trimmed with gauze ribbon and flowers.  Her gown is full dress over a medium hoop: the man conducting her is wearing a suit and a vest with a gold ground embroidered around with colored gold threads. (1779)

WEDDING DRESS.  This is a full sacque of rich stuff, trimmed with taste. 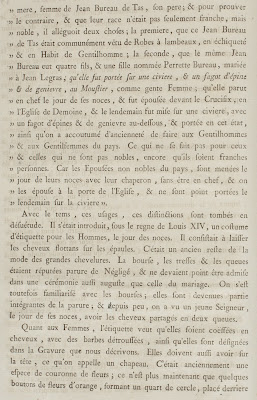 Formerly, not only Dress but also the manner of being conducted to the Church and the place of Marriage varied according to the rank and quality of the person.  This is the result of a report from the first of December 1446, in the reign of Charles VII, which is here analyzed, which could give an idea of the fashions and customs of the time. 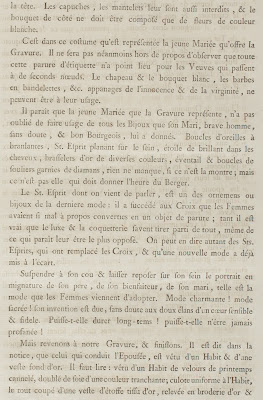 "The Dean of Gaye maintained, that Jean Bureau was a Human body, and was provided to serve his Church, because of his mother, wife of Jean Bureau of Tas, his father; and to prove the contrary, and that their people were not only frankish, but also noble, he alleged two things; the first, that this Jean Bureau of Tas was commonly dressed in tatters, in checks, and in a Gentleman's Suit; the second, that the same Jean Bureau had four sons, and a daughter called Perrette Bureau, married to Jean Legras; that she was carried in a hand-barrow, and a bundle of thorn and juniper, to the Monastery, as a gentle woman; that she appeared first in line on the wedding day, and was married in front of the Crucifix, in the Church of Demoine, and the next day was taken in a hand-barrow, on top of a bundle of thorns and juniper, and carried in that state, as it was formerly accustomed to do to Gentlemen and Gentlewomen of the country.  This is not done for those who are not noble, even if they are frankish people.  For the non-noble Wives of the country are conducted on the wedding day with their chaperone, without being first in line, and they are married at the door of the Church, and are not carried the next day in a hand-barrow."

With the times, these customs, these distinctions are fallen into disuse.  In the reign of Louis XIV, a suit of etiquette was introduced for Men on the wedding day.  It included leaving the hair hanging on the shoulders.  This was an ancient remainder of the fashion of long locks.  The purse, the tresses, and the train were deemed part of the Négligé parure, and would not be admitted in a ceremony as august as that of marriage.  One is already familiar with purses; they have become an integral part of the parure; and recently, a young Seigneur was seen on his wedding day to have his hair split in two queues.

Regarding Women, the etiquette is that their hair is coiffed, with let-down lappets, and they are shown in the Print that we are describing.  They must also have on the head, what is called a chapeau.  This was formerly a type of crown of flowers; it is now some orange blossom buds, forming a quarter circle, placed behind the head.  Capuchins and mantelets are also forbidden, and the hand bouquet must be composed of white flowers.

It is in this costume which the young Wife is represented in the Print.  It will not be, however, irrelevant to observe that all that traditional parure has no place for Widows tying their second knots.  The chapeau and the white bouquet, the loose lappets, etc., items that pertain to innocence and virginity, cannot be used by them.

It seems that the young Wife that the Print represents has not forgotten to make use of all the Jewels that her Husband, brave man, without a doubt, and a good Bourgeois, has given her.  Trembling earrings, soaring St. Esprit on her chest, brilliant star in her hair, gold bracelets of diverse colors, fan and shoe buckles trimmed with diamonds, nothing lacking, apart from the watch; but it is not she that must give the time to the Shepherd.

The St. Esprit which was just spoken of is one of the ornaments or jewels of the latest fashion: it succeeded the Cross that Women had so inappropriately converted to a piece of jewelry; as it is true that luxury and coquetry know how to take advantage of everything, even of that which seems to be the most opposite of them.  One can say as much of the St. Esprits, which have replaced the Cross, and that a new fashion has already taken apart.

To suspend from her neck and allow to rest on her chest a miniature portrait of her father, her benefactor, her husband, such is the fashion that Women have just adopted.  Charming fashion! sacred fashion! its invention is due, without a doubt, to the sweet impulses of a sensitive and faithful heart.  May it endure a long time! may it never be profaned!

But we return to our Print, and finish.  It is said in the caption, that he who conducts the Spouse is dressed in a Suit and a vest with a gold ground.  It is necessary to read: dressed in a Suit of spring cannelé velvet, lined with silk of a sharp color; breeches matching the Suit, the whole cut with a vest of cloth of gold, relieved with gold embroidery and sequins of diverse colors.  White gloves, bouquet in the hand, chapeau brisé under the arm.

* Pekin is silk with stripes of equal width, but the stripes have been omitted in the drawing. 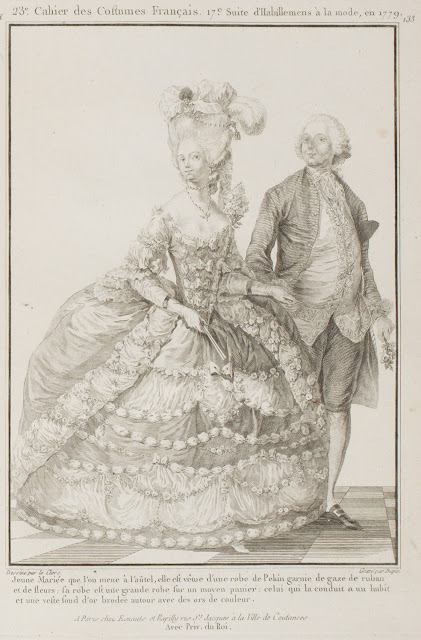